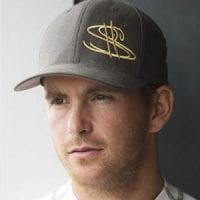 The self-confident Scott Speed bucked the trend in the early 2000s when he was an American with Formula 1 ambitions. His move to Europe coincided with the arrival of Dietrich Mateschitz’s Red Bull energy drink in the sport. Soon backed as part of its driver development scheme, he was the first American since Michael Andretti to start a Grand Prix.

A national karting champion during the 1990s, Speed began racing cars in 2001 and he ended the year as Formula Russell Champion. He was selected for Red Bull’s search for the next American star a year later. That led to a drive in Alan Docking’s Dallara F303-Mugen in the 2003 British Formula 3 Championship although illness curtailed his first season.

A step back to Formula Renault in 2004 gave his career impetus for the American won both the German and European titles with Motopark Academy. Speed tested for Eddie Cheever’s Indycar team that year and the newly rebranded Red Bull Racing F1 concern in 2005. That included driving the Cosworth-powered RB1 as Friday test driver at that year’s Canadian and United States GPs.

He raced for iSport in the inaugural GP2 Series in 2005 and finished third in the championship behind Nico Rosberg and Heikki Kovalainen after coming second at Barcelona (having qualified on pole position) and Silverstone.

Speed was promoted to the Red Bull co-owned Scuderia Toro Rosso for the 2006 F1 World Championship. He spent 18 months with the team during which time he failed to make a worthwhile impression. He finished eighth on the road in the 2006 Australian GP but lost the resulting championship point when penalised 25 seconds for overtaking David Coulthard under yellow flags. He was also fined $5000 for swearing in front of the post-race Stewards.

His Toro Rosso STR2-Ferrari finished ninth in the 2007 Monaco GP but his stay with the Faenza-based concern ended in a very public dispute with Team Principal Franz Tost. He was replaced by Sebastian Vettel after the European GP and has since raced in his homeland.

He won races in both the ARCA and NASCAR Truck series during 2008 but his challenge for the former ended in controversy. Spun out of the final race at Toledo by championship rival Ricky Stenhouse Jr, Speed rejoined in his repaired car and deliberately crashed into Stenhouse to hand the race and title to Justin Allgaier.

Five starts in the 2008 Sprint Cup with Red Bull Racing’s Toyota Camry included qualifying second for the final round at Homestead. He led the 2010 Daytona 500 and finished fifth at Talladega but was eventually released by the team at the end of the season.

Left without a regular drive for the next couple of seasons, Speed entered a partial schedule in 2012 and 2013 with Leavine Family Racing’s Ford although he was often one of the first to retire. He subsequently entered four Formula E races during 2015 with Andretti Autosport – finishing second at Miami.

Speed made his rallycross debut at the 2013 X Games which he promptly won. He switched to Andretti’s Volkswagen Beetle in the 2015 Global Rallycross Championship – winning the title for three years in a row from 2015-17. IMG introduced the American Rallycross Championship (ARX) in 2018 as a rival to the Global series which soon collapsed. Andretti was among the leading teams to transfer to the IMG-sanctioned series and Speed’s success continued. He won the inaugural ARX title in Andretti’s Beetle. He switched to Subaru Rally Team USA for 2019 and won the opening race at Mid-Ohio. However, he was sixth in the final standings after missing the last two rounds. ARX folded at the end of 2019 due to a lack of sponsorship.