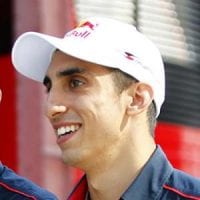 When Sébastien Buemi made his Formula 1 debut in the 2009 Australian Grand Prix, it marked the rapid rise for this young Swiss national. Three seasons and 55 races with Scuderia Toro Rosso included occasional visits to the top 10 but it is as a championship-winning sports car and Formula E racer that Buemi now plies his trade.

Always competitive but never a champion during his formative years, he spent 10 years in karts before making his car racing debut in 2004. That was in German Formula BMW and Buemi finished third behind new champion Sebastian Vettel. Runner-up to Nico Hülkenberg a year later when driving for Mücke Motorsport, Buemi only lost the title due to a retrospective penalty. He also finished second in the end-of-season World Finals in Bahrain, ironically after Hülkenberg was penalised for dangerous driving.

He graduated to the team’s Formula 3 Euroseries squad in 2006 and won at Oschersleben. Beaten to the 2007 title by Romain Grosjean despite three victories, he also made his GP2 debut at Monaco that year with the crack ART Grand Prix team and gained his first F1 experience when testing for Red Bull Racing.

Having enjoyed sponsorship from the Austrian energy drink during his junior career, Buemi was the team’s official test driver in 2008. He also drove the FIA medical car at that year’s Japanese GP when the regular incumbent (Dr Jacques Tropenat) fell ill. Buemi’s main focus was GP2 when representing Arden International in both the Asian and main series itself. He was a race winner in both and finished second in that new winter series when again beaten by Grosjean.

His best performance of the year came in the Magny-Cours sprint race when he started 21st but won after making the correct tyre choice on a drying track. Further success in Hungary helped Buemi to sixth in the championship and to confirm Red Bull’s choice of its next GP graduate.

The only F1 rookie in 2009, Buemi showed well early on by regularly out-qualifying his more experienced Toro Rosso team-mate Sébastien Bourdais until the Frenchman was replaced. He finished in a fine seventh position on his debut in Australia and repeated that result after qualifying sixth in Brazil. Unfortunately, the most memorable moment of his second season with the team was a 190mph accident in China when both front wheels flew off simultaneously.

Buemi scored a couple of eighth place finishes during 2011 but he was not retained for a fourth season. Instead, he joined Red Bull Racing as its reserve driver and Toyota for the Le Mans 24 Hours in 2012. Ultimately not needed by Red Bull, he was a contender in the Toyota until co-driver Anthony Davidson’s spectacular accident.

Success in the World Endurance Championship

Buemi remained with Toyota on a full-time basis in 2013 and finished second at Le Mans. He then won the end-of-season Bahrain Six Hours as he, Davidson and Stéphane Sarrazin clinched third in the championship.

Buemi and Davidson began the 2014 World Endurance Championship with Nicolas Lapierre sharing their Toyota TS040 Hybrid although the Frenchman left the team in September. They won four of the first six races but missed out at Le Mans once more – finishing third. Ending the season with no third driver, Buemi and Davidson clinched the world title with a round to spare.

They were joined by Kazuki Nakajima for the next two seasons but finished no higher than third. More frustratingly still, they came within minutes of winning the 2016 Le Mans 24 Hours only for Nakajima to be stranded on the startline without power.

Buemi was Toyota’s leading contender during the 2017 World Endurance Championship and won five of the nine championship rounds. Crucially, the Buemi/Davidson/Nakajima Toyota TS050 Hybrid only finished eighth in the double points Le Mans 24 Hours having lost 29 laps in the pits and so finished as runners-up behind Porsche.

Toyota finally won the Le Mans 24 Hours in 2018 with Buemi and Nakajima joined in the winning TS050 Hybrid by Fernando Alonso. Having already won at Spa-Francorchamps, the trio were disqualified after winning on the road at Silverstone. Second at Fuji and Shanghai at the end of the year, they won at Sebring and Spa-Francorchamps in 2019 before successfully defending their Le Mans title and clinching the 2018/19 World Endurance Championship.

In addition to racing for Toyota, Buemi has been a star of the FIA Formula E Championship since its opening race in Beijing 2014. Driving for e.DAMS Renault, he won three times during that inaugural season and finished as runner-up to Nelson Piquet Jr.

He won three more races during the 2015/16 campaign but went one better in the final championship reckoning – surviving heavy contact with rival Lucas di Grassi in the final round in London’s Battersea Park to be crowned champion.

The protagonists for Formula E’s third season remained the same but the result was reversed. E.DAMS Renault’s Buemi won six of the first eight races of 2016/17 but was forced to miss the New York double-header due to the clashing Nürburgring 6 Hours.

Consequently, Buemi entered the Montréal decider with a much reduced advantage and that meeting proved to be a disaster. He crashed during qualifying, was disqualified from race one due to an underweight car and finished race two outside the points to hand the title to di Grassi.

Buemi suffered his first winless Formula E campaign in 2017/18 when hampered by e.DAMS Renault’s lack of development and outright speed. He crashed into di Grassi at the opening round in Hong Kong before scoring four podium finishes, including converting pole position into a season-best second-place finish in Marrakesh. Buemi added further pole positions for both races at the New York finale but was only fourth in the final standings.

The team was rebranded as Nissan e.DAMS for 2018/19 and Buemi recovered from mid-season problems to win in New York and finish as runner-up behind Jean-Eric Vergne. He crashed out of the lead in Santiago due to a car issue and suffered a puncture in Paris when on course for another win. Furthermore, DAMS founder and Team Principal Jean-Paul Driot succumbed to a long illness shortly after the end of the Formula E season.