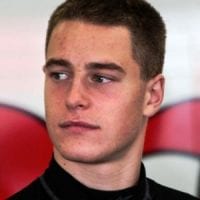 This highly rated junior driver was a championship winner throughout his career on the way to Formula 1 but suffered a frustrating and short time at the top. He now looks to restore his reputation in Formula E and as Mercedes-Benz reserve.

A former national karting champion, Vandoorne made the switch to cars in the 2010 French Formula 4 Championship (formerly Formula Campus). He won six times to clinch the title at the first attempt.

Formula Renault 2.0 came next, the Belgian driving for KTR in both the Eurocup and North European Cup. Third in the latter, he joined Josef Kaufmann Racing for the 2012 campaign. The European Championship was a battle between Vandoorne and Koiranen Motorsport’s Daniil Kvyat. A double victory at the Nürburgring gave Vandoorne the points lead and further wins at the Hungaroring and Paul Ricard meant he remained ahead when they arrived at a wet Barcelona for the final round. He crashed into another competitor that day but his Russian rival was unable to score the third place he required to snatch the title.

The next two seasons were spent racing for ART in the GP2 Series. He won the feature race on his debut in Bahrain and pole position at the last four race weekends of the season to emphasise his speed. However, the experience of Jolyon Palmer eventually told as the veteran eased to the title. Vandoorne scored his fourth win of the season in the Abu Dhabi feature to snatch second overall at the final round.

Vandoorne immediately put his mark on the 2015 GP2 season by winning the opening four feature races of the year. He scored another three wins on Saturday to emerge as an emphatic GP2 champion after a record-breaking campaign.

Confirmed as McLaren’s reserve driver for the 2016 F1 World Championship, Vandoorne replaced the injured Alonso for the second round in Bahrain. He qualified 12th and drove a steady race to finish 10th to score the final championship point of the race. In addition to his F1 duties that year, Vandoorne raced Dandelion’s Dallara-Honda in the Japanese Super Formula Championship. He won twice as he finished as Honda’s top performer when fourth in the final standings.

Vandoorne replaced Jenson Button as Alonso’s fulltime team-mate in 2017 although Honda’s initial reliability woes restricted testing and hampered early races. He did not make it through Q1 until Monaco but intense work with the engineers gradually bore fruit as they developed the car and adapt his driving style. Tenth in Hungary delivered his first championship point of the season and Vandoorne scored back-to-back seventh-place finishes in Singapore and Malaysia. He was 16th in the 2017 World Championship having scored just four points less than his illustrious team-mate.

McLaren switched to Renault engines in 2018 but suffered an increasingly disappointing campaign as the hoped-for improved performance was not forthcoming. Vandoorne scored points in three of the first four races but scored just once more all season. He was out-qualified by Alonso at all 21 races and was deemed surplus to requirements at the end of the season.

His immediate future was rescued by Mercedes-Benz who hired Vandoorne for the 2018/19 Formula E Championship and as a simulator driver for the F1 team. With the German manufacturer a year away from entering the electric single-seater series, Vandoorne drove a Venturi VFE-05 for newcomers HWA in 2018/19. Hampered by reliability issues and a couple of accidents early in the year, he impressed by qualifying on pole position in Hong Kong and on the front row in Berlin. Third in the Rome ePrix and when making his debut in the 2019 Le Mans 24 Hours when driving a BRE BR1-AER, Vandoorne was retained when Mercedes-Benz entered the championship for the start of the 2019/20 season.

After the Covid pandemic caused the Formula E calendar to be settled with six races in Berlin, Vandoorne took his first Formula E victory in the final race of the season. He finished second in the championship standings.