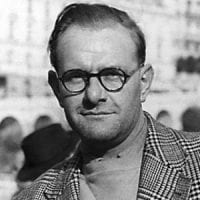 S.H.Allard was an engineer who competed in trials and hillclimbs during the 1930s. At first he drove a Morgan, but he combined Bugatti bodywork with a two-year-old Ford V8 engine to create the first Allard “Special” in 1936. It proved to be successful and led to the production of 12 replicas built in his Putney workshops.

A Ford dealer before the war, he formed the Allard Motor Company in 1945, now housed in a permanent factory in Clapham. Instrumental in establishing Britain in the specialist car industry, the marque gained a reputation for some handsome and sought after sports cars and coupés.

Allard continued to compete himself – doubtless aware that success on the track could only help his business. His single-seater Allard-Steyr V8 won at Bouley Bay, Craigantlet and Prescott during 1949 to clinch the RAC Hillclimb Championship.

Sports car success with the J2

The landmark J2 sports car was introduced at that year’s London Motor Show and proved successful on both sides of the Atlantic. Allard entered his first Le Mans 24 Hours in 1950 with a Cadillac-powered J2 and Tom Cole (who had already won at Bridgehampton in a similar car) as his co-driver. They ran in second position during the night before losing nine laps in the pits. Allard and Cole charged back through the field to take third position in the last half hour and win the 8000cc class.

That was the first of Allard’s four starts at Le Mans but he would not finish again. He won the 1952 Monte Carlo Rally with a P-type saloon but the marque was now under mounting competition from both Jaguar and Aston Martin. The failure of the JR sports car in America further increased that pressure.

Allard’s works team was all but disbanded in 1953 and the manufacture of road cars ceased in 1960. He took a new direction in 1961 and built the 5750cc Chrysler-powered Allard dragster. It was “a beautifully conceived piece of machinery” and helped establish drag racing in England. The British Drag Racing Association was formed in 1964 with Allard as its first President.

The company also modified Ford Cortinas and Anglias for racing but it closed when Allard died after a lengthy illness in 1966.