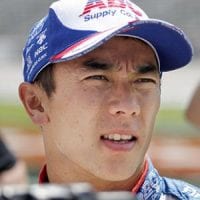 Takuma Satō’s six year Formula 1 career was forever linked to the Honda Motor Company. He finished third in the 2004 United States GP and inspired the formation of an F1 team but his time as a Grand Prix driver ended when that Super Aguri concern folded in 2008. However, his subsequent career in the United States has included victory in that country’s most famous race.

Unlike most Japanese drivers, he has hardly raced at home since winning the national karting title in 1997. The following season, Satō travelled to England to race in Vauxhall Junior for Diamond Racing. He graduated to Formula Opel in 1999 and won the opening race at Donington Park before making his Formula 3 debut in the national class mid-season.

It was his move to Carlin Motorsport in 2000 that began to reveal Satō’s potential. Third in the British series that year, he remained with the team in 2001 as Anthony Davidson’s team-mate. They dominated proceedings with the Japanese driver taking the title and victories in the prestigious non-championship events at Zandvoort and Macau.

Formula 1 with Jordan and BAR

That was enough for Honda to place him as Giancarlo Fisichella’s Jordan Grand Prix team-mate in 2002. He crashed too often (most spectacularly in Austria) but his F1 rookie campaign ended with an emotional fifth position in his home race to score the first points of his career.
He moved to BAR-Honda as test driver and replaced Jacques Villeneuve for the 2003 Japanese GP. Again Satō delighted his home crowd by finishing in the points – sixth after going wheel-to-wheel with Michael Schumacher. He continued to race for BAR for the next two seasons and was eighth in the 2004 World Championship. On the front row for the European GP and third place in the United States proved to be Satō’s F1 career bests.

However, he only scored a solitary point during a poor 2005 and the re-badged Honda team replaced Satō with Rubens Barrichello for the following season. Fearful of the public reaction in Japan, Honda helped form and fund the new Super Aguri F1 Team with Satō as its lead driver.
The hastily created concern struggled gamely for just over two seasons. It impressed in 2007 by outperforming the works Honda team on occasion with Satō finishing sixth in the Canadian GP. Unfortunately the money ran out after the 2008 Spanish GP and the team folded leaving Satō without an immediate F1 future.

Switch to the IndyCar Series

He tested for Scuderia Toro Rosso that winter but switched instead to Indycars and KV Racing Technology in 2010. He crashed out of half the races during his debut season although pole positions at Iowa and Edmonton during 2011 showed his raw pace.

A move in 2012 to Rahal Letterman Lanigan’s Dallara DW12-Honda included finishing third at São Paulo and second at Edmonton. That campaign could also have delivered a shock win at Indianapolis. Satō qualified 19th and worked his way through the field to lead for 31 laps. He was running second behind Dario Franchitti as they entered the last lap. Satō made an audacious move for the lead in Turn 1 but spun into the wall and was classified down in 17th.

The next four seasons were spent racing for the legendary A.J.Foyt in the IndyCar Series and success was almost immediate. He qualified on the front row for 2013’s opening race in St Petersburg and won round three at Long Beach to become the Indycar’s first Japanese winner. That also returned the team to Victory Lane for the first time since 2002. Second next time out in São Paulo gave Satō the championship lead as the series entered the month of May. He qualified on pole in Houston but only scored one more top 10 finish all year as he faded to 17th in the final points.
Pole positions at St Petersburg and for the second race on Detroit’s Belle Isle were the highlight of his 2014 campaign and Satō finished second in the chaotic second Detroit race a year later. He was also the original development driver for the all-electric Formula E category and he raced in the inaugural event at Beijing, reunited with former F1 boss Aguri Suzuki.

Foyt switched to Chevrolet engines in 2017 so the Honda-contracted Satō moved to Andretti Autosport instead. A more consistent campaign, his crash at Texas apart, included seven top 10 finishes as he finished eighth in the final standings. He started the Indianapolis 500 from the inside of the second row and remained in the lead battle throughout. Satō then passed three-time winner Hélio Castroneves with five laps to go and held off his Penske rival to win by 0.2011 seconds and register the highest profile success of his career to date.

A move to Rahal Letterman Lanigan Racing In 2018 included a fortunate victory at Portland and a third-place finish at Iowa in what was an otherwise inconsistent campaign. That form continued during in 2019. He dominated from pole position at Barber Motorsports Park, where RLLR adapted best to Firestone’s old, hard red tyres, and won at St Louis. Third in the Indianapolis 500, having climbed through the field, and when Detroit’s first race was stopped, Satō lost the chance of victory in Texas when penalised due to a pitlane infraction. He was involved in the frightening five-car accident on the opening lap of the Pocono 500 that sent Felix Rosenqvist to hospital. Satō finished ninth in the final 2019 points.

In 2020, Sato added a second Indy 500 win to his resume. The Japanese driver trailed leader Scott Dixon following the final stops with 30 laps to go but made a move stick on lap 172. Sato somehow resisted the pressure from Dixon for the remaining laps until a caution came out with four laps to go to recover Spencer Pigot’s car and repair the barriers by pit entry. The lengthy delay meant the race finished under caution. It was Sato’s only win of the season, ending the year 7th in the standings.