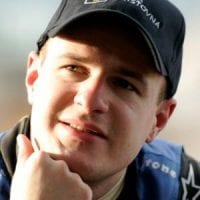 When Tomáš Enge started the 2001 Italian Grand Prix he became the Czech Republic’s first Formula 1 world championship driver. However, his career has been interrupted by a couple of random drugs tests.

The son of national saloon-car hero Břetislav Enge, he saved enough money when 16 years old to buy a Ford Fiesta to compete in his country’s one-make series. His single-seater baptism was in the 1995 German Formula Ford Championship as Eifelland Racing team-mate to eventual champion Nick Heidfeld. Enge eradicated the mistakes of that debut campaign to win the title in his second season.

Now managed by Antonin Charouz, he spent the next two seasons in Formula 3 with Bertram Schäfer Racing, initially as Heidfeld’s team-mate once more. The choice of Martini chassis for 1998 proved a mistake and Enge ended the year racing in the final five Formula 3000 rounds with Sport Auto Racing. That included an impressive fifth in qualifying at Spa-Francorchamps and a sixth place finish in the Nürburgring finale.

Enge switched to WRT for 1999 but second at Magny-Cours was a rare competitive weekend. He tested for Jordan Grand Prix at the end of the season and Enge was its reserve driver for 2000 as well as continuing in F3000 with the McLaren junior MySap.com team. A well-judged change to dry tyres at Hockenheim was rewarded with victory as he finished sixth in the F3000 standings.

With new backing from his local Coca-Cola importer, Enge’s Nordic Racing entry was a consistent F3000 challenger during 2001. He qualified on pole three times, won twice and finished third in the championship. He also made his F1 debut in 2001 when replacing the injured Luciano Burti for the final three races of the year – his Prost AP04-Acer finishing 12th on his debut in Italy.

But that did not secure a permanent drive so Enge signed with Arden Team Russia for his fourth full F3000 season. He started from the front row on all but two occasions, won four times and seemingly clinched the 2002 F3000 title. However, just before securing the championship at Monza, it was announced that he had failed a random drugs test in Hungary. Traces of cannabis had been found and Enge was subsequently stripped of his Hungaroring victory and therefore relegated to third in the standings.

A hoped-for F1 drive with Jordan was lost and he struggled to maintain his single-seater career. His 2004 return to F3000 with Ma-Con Engineering yielded a consistent fourth in the standings and he was a race winner in the 2005/06 A1GP World Cup of Motorsport although an Indycar season with Panther Racing in 2005 was less successful.

Enge then set about establishing himself in endurance racing. However, that was interrupted by injuries sustained at the St Petersburg ALMS race in 2007. He crashed the GT2 leading Ferrari 430GT and suffered a broken elbow, ankle and ribs as well as a collapsed lung.

Out of racing for six weeks, he enjoyed a successful 2009 with Aston Martin Racing. Driving the team’s Lola B09/60-Aston Martin with Jan Charouz and Stefan Mücke, he was fourth in the Le Mans 24 Hours and won twice to clinch the Le Mans Series LMP1 title.

He switched to the new GT1 World Championship a year later with an Aston Martin DBR9 and he won at the Nürburgring with Darren Turner. Four races in the 2012 series with a Reiter Engineering Lamborghini Gallardo included starting from the front row in Slovakia after starring in the qualifying race. However, he was suspended for 18 months after he tested positive for a banned substance.

He returned to racing and Reiter Engineering’s Lamborghini Gallardo in the 2014 Blancpain Sprint Series. Fourth at the Algarve he scored a couple of second place finishes in the ADAC GT Championship driving Reiter’s Chevrolet Camaro. He had switched to the Lamborghini by the time he won at the Red Bull Ring (Spielberg) during 2015. Enge now makes occasional endurance racing appearances while working for Reiter as Sporting Director.