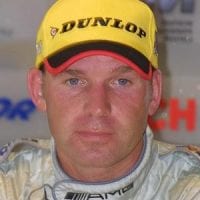 This spectacular touring car ace has enjoyed a successful if controversial career to date.

A winner in Germany and overseas

He graduated through the national ranks to win the 1992 German Porsche Carrera Cup and the following season established Uwe Alzen on a wider stage. Outright success for Porsche in the Spa 24 Hours was the highlight but Alzen also finished as runner-up in the DTM’s privateer class with Team Persson’s Mercedes-Benz 190E and in the Porsche Supercup. He repeated that DTM success a year later before winning the 1994 Supercup and 1995 ADAC GT titles.

He switched to Zakspeed’s Opel Calibra V6 for the 1996 DTM but transferred to the lesser national super touring series a year later at Opel’s behest. His works Vectra won that title on the road in 1999 only to lose out in the appeal court a month later. The Audi of rival Christian Abt had been driven off the road on the last lap by Opel privateer Roland Asch (who had previously been black flagged for ignoring a stop-go penalty). The Abt Sportsline team successfully argued that the final lap of the race should be declared null and void and the championship result was thus reversed.

Alongside his saloon-car career, Alzen raced in the sports car classics and his works Porsche 911 GT1 finished second in both the Daytona and Le Mans 24 Hour races in 1998. He also won the GT class at Le Mans a year later with Manthey Racing’s Porsche 996 GT3-R.

In 2000 Alzen returned to DTM with a Team Holzer Opel Astra coupé and growing success. He won that year’s Nürburgring 24 Hours for Porsche before qualifying on the front row when the DTM series returned on the modern circuit. A breakthrough victory followed at Oschersleben and Alzen ended the season with a double triumph at the Hockenheim finale only to be fired after colliding with team-mate Manuel Reuter en route to victory in race one.

Alzen was not unemployed for long – joining AMG Mercedes for 2001 and finishing as championship runner-up behind team-mate Bernd Schneider. However, he walked out on the team on the eve of the 2003 season after a row with Mercedes management about the structure of the team.

He rebuilt his career in FIA GTs with Franz Konrad’s Vitaphone team by winning four times in 2004 with its Saleen S7R-Ford and co-driver Michael Bartels. He returned to the Porsche Supercup in 2005 to finish as runner-up in 2006 and third a year later.

Alzen joined BMW Team Schnitzer for its Le Mans Series GT2 campaign in 2010 and enjoyed continued success in the Nürburgring 24 Hours – his BMW M3 winning that year and finishing second in 2011. He switched to AMG Mercedes for that race in 2015 and finished third a year later.