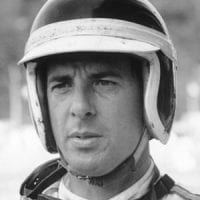 Raised in South Africa, Vic Wilson was a trained mechanic who first competed with a Jaguar XK120 in a street race in Salisbury, Rhodesia in 1956. He raced in the region for three years before moving back to England.

When Richard Gibson was injured in early 1960 he invited Wilson to drive his Formula 2 Cooper T43-Climax in lesser national events. Wilson finished fourth at Montlhéry before the British teams’ boycott of that year’s Italian Grand Prix provided him with his highest profile opportunity. One of those hastily arranged to fill the field, Wilson qualified and ran last until the Cooper retired.

He moved back to Hull and did not race again until persuaded to return in 1964 by his cousin Bernard White. He drove a Formula 1 Lotus 21 in minor British races and hillclimbs that year.

Wilson retired his Lotus 30 from the 1965 Tourist Trophy and made an F1 return in 1966 with Team Chamaco Collect’s BRM P261. Fourth at Syracuse when three laps behind the winner, Wilson practised for the Belgian GP but Bob Bondurant raced the car.

He went back to running a car dealership and did not race again. He retired to Gerrards Cross where he died in 2001 after an accident nearby.