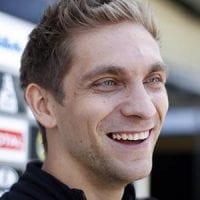 Destined to become the first Russian to race in the Formula 1 World Championship, Vitaly Petrov played a crucial role in deciding the title in 2010.

A graduate in meteorology from Moscow University, won the Russian Lada Cup in 2002 and landed further national success by winning both Formula 1600 and Lada Revolution titles in 2005.

His first overseas experience was in Formula Renault during 2003 and 2004 although those seasons with the Euronova Junior team were largely unsuccessful. However, buoyed by his double success back home in 2005, Petrov rejoined Euronova for the following season and finished third in the 2006 Italian 3000 Championship. He also raced in GP2 with Dave Price’s Direxiv team from Hockenheim that year although he finished no higher than 10th.

A switch to Campos Grand Prix allowed Petrov to improve steadily throughout 2007. That culminated in Petrov beating team-mate Giorgio Pantano to win the feature race at Valencia’s championship finale. The off-season GP2 Asia Series confirmed that improvement with Petrov qualifying on pole position at Sentul, winning at Sepang and third in the final standings.

A consistent 2008 included another Valencia victory (albeit on the new harbour side Formula 1 circuit) and resulted in seventh in the championship. He again won in Malaysia during the 2008/09 GP2 Asia Series as he developed into a consistent if not pacesetting contender.

Nico Hülkenberg may have been the class of the field in the main 2009 GP2 Series but it was Petrov who ran him closest. The tall Russian remained with the renamed Barwa Addax concern and won two feature races to finish as runner-up.

Formula 1 with Renault and Caterham

Aided by sponsorship from his homeland, he graduated to F1 with Renault in 2010 for the first of two seasons with the team. There were incidents aplenty including regular contact with Michael Schumacher’s Mercedes-Benz during 2011. Fifth in the Hungarian GP was the highlight of a tough rookie campaign although his performance in Abu Dhabi – when he held off Fernando Alonso for sixth – confirmed Sebastian Vettel’s first world title. He then out-performed his more experienced team-mate Nick Heidfeld at the start of 2011 and finished in a career-best third position in the Australian GP.

Having spent a year away from the sport, Petrov made an unsuccessful return with a works Mercedes-Benz in the German DTM touring car series. He qualified at the back of the field throughout that 2014 campaign and finished no higher than 11th at Zandvoort.

Again on the side-lines for a season, Petrov returned in the 2016 World Endurance Championship when sharing SMP Racing’s LMP2 BRE BR1-Nissan with countrymen Kirill Ladygin and Viktor Shaitar. Seventh overall and third in class at Le Mans was their best showing of the season. He switched to the rival Manor Racing concern for 2017 when sharing a ORECA 07-Gibson with Roberto González and Simon Trummer. It was a lowkey campaign with fifth in LMP2 at the final two races of the season their best class results.

Petrov joined SMP Racing’s LMP1 line-up for the 2018/19 WEC “super season” with Dallara commissioned to build BR Engineering’s new AER-powered BR1 chassis. Sharing with compatriot Mikhail Aleshin throughout, the Russians were joined by Jenson Button from the 2018 Le Mans 24 Hours. They were fourth at Fuji and third at Shanghai before Button left at the end of 2018. The former World Champion was replaced by Brendon Hartley for the 2019 Sebring 1000 miles which they finished in another third-place. Another F1 refugee was their co-driver at Spa-Francorchamps and for the Le Mans 24 Hours – Petrov, Aleshin and Stoffel Vandoorne third on both occasions. That consistency was rewarded with Petrov and Aleshin fourth in the final 2018/19 LMP1 standings.