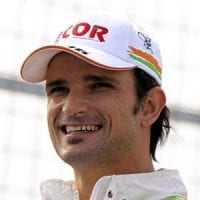 Tonio Liuzzi arrived in Formula 1 amid much hype and expectation. A self-confessed party man and entertainer, the Italian ultimately struggled to deliver at that level.

Championship winner in karting and cars

World Karting Champion in Formula Super A in 2001, Liuzzi also made his car racing debut that year when third in the German Formula Renault Championship. He joined Bertram Schäfer’s respected Opel-sponsored team for the 2002 Formula 3 season. An inexperienced 22 year old perhaps, but Liuzzi finished second at the Nürburgring, Spielberg and Hockenheim, also winning at Imola on a rare outing in the Italian series.

Liuzzi raced in Formula 3000 for two seasons with backing from Red Bull. He finished fourth in 2003 and utterly dominated his second season. That championship-winning 2004 campaign was driving for Arden International in what was the last year before F3000 was replaced by GP2. Liuzzi qualified on pole position for all-but-one of the 10 rounds and won seven times.

Red Bull bought Jaguar Racing before the 2005 F1 season and Liuzzi made four Grand Prix starts. He was eighth on his debut at Imola to score a first world championship point. But Liuzzi was disappointed to be placed with the sponsor’s second-string Scuderia Toro Rosso for 2006 and 2007.

Another eighth place finish in the United States GP at Indianapolis was the highlight of his first full season but he failed to make an impression on too many occasions. His fading promise was only emphasised by the form of young team-mate Sebastian Vettel in the second half of 2007. Sixth in the Chinese GP, Liuzzi was nonetheless replaced by Sébastien Bourdais for the following season.

Liuzzi moved to Force India as its reserve driver for the 2008 World Championship. Giancarlo Fisichella’s sudden opportunity to join Ferrari for the 2009 Italian GP gave Liuzzi a lifeline. He replaced his compatriot for the last five GPs of the season and immediately qualified in the top 10 for the first time when seventh on the grid at Monza.

He remained with Force India in 2010 and recorded career-bests for qualifying (fifth in Canada) and equalling the sixth place finish in Korea. It was not enough however and Liuzzi was replaced at the end of the season.

Keen to remain in the F1 field, he spent 2011 driving the back-of-the-grid HRT F111-Cosworth. That causing a first-corner incident at Monza was the highest profile moment of his season illustrates a frustrating campaign.

Liuzzi switched to the Superstars touring car series in 2012 with CAAL Racing’s Mercedes-Benz C63. He won twice and only lost the title to Audi’s Johan Kristoffersson when he was hit by a rival during the final round at Enna-Pergusa. Japanese GT and Super Formula in 2014 was without notable success and five Formula E races with Jarno Trulli’s team in 2015 proved disappointing. The team suffered technical difficulties at the start of the 2015/16 Formula E season and withdrew after two races without making the grid.

Two races in Colin Kolles’s CLM P1/01-AER during the 2015 World Endurance Championship ended in retirement and a once promising career petered out with final appearances in the 2017 International GT Open Series. Sixth with a Lamborghini Huracán GT3 at Estoril’s opening race was Liuzzi’s best result that year.