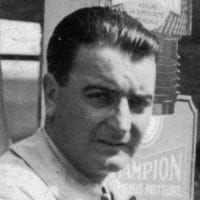 The names of Henry Segrave and Richard Seaman may be better known but the somewhat mysterious “W.Williams” won more Grands Prix before World War II than any other British driver.

No product of Brooklands or Donington Park, he was scarcely known in England but “Williams” won successive French GPs at the end of the 1920s. However, it was his victory in the inaugural Monaco GP in 1929 and service in the French Resistance that marks his place in history.

The son of an English horse breeder and his French wife, the young Willy Grover was born and brought up in France. He worked as a chauffeur while in his teens and took the pseudonym “W.Williams” when he first competed on an Indian motorcycle to conceal his passion from his disapproving mother.

He saved enough money to buy a Hispano-Suiza which he drove on the 1926 Monte Carlo Rally. He upgraded to a Bugatti T35 by the end of the year and made his GP debut in Spain that autumn. The promise of a works Talbot drive for 1927 was thwarted when the marque withdrew from racing due to the prevailing economic depression.

Instead, “Williams” joined Bugatti’s works team for 1928. That year’s French GP was run at St Gaudens as a handicap sports car race and proved a stroll for the works Bugatti T35C of “Williams”. The race was held at Le Mans a year later to new GP rules but the result was the same with “Williams” leading from start-to-finish.

The new event on the streets of Monte Carlo caused quite a stir in 1929 and provided “Williams” with an indelible place in the sport’s history. His British Racing Green Bugatti was third into the first corner and led at the end of the opening lap. Cynics had predicted carnage but the race passed off with remarkable decorum with “Williams” winning.

“Williams” was something of a mystery to his fellow drivers. In his autobiography, René Dreyfus discussed whether his rival was a wealthy gentleman or a hired chauffeur (the latter was the truth) and concluded that “what we did know was that he was a charming but very reserved gentleman.”

With GPs 10 hours in duration in 1931, “Williams” and Count Conelli shared victory in the 1931 Belgian GP. The Englishman enjoyed a run of success in the minor race on the beach of his adopted home town La Baule but his top-line career was on the wane.

Hero of The Resistance

“Williams” had a new focus to his life from 1939. As an Englishman who lived in France and spoke as a Frenchman, he was an attractive proposition for the Allied SOE in World War II. He joined the British Special Forces, parachuted into occupied France in 1942 and helped establish a Resistance cell in Paris with old racing adversary Robert Benoist. However, both would die at the hands of the Gestapo. “Williams” was arrested on August 2 1943 and was executed at the Sachsenhausen concentration camp in March 1945.

With four victories in Grands Epreuve to his name, “Williams” was Britain’s most successful driver before World War II although he died as an almost unknown hero. That is in keeping with a private man whose place in history (both wartime and motor racing) is obscured when it should be celebrated.