THE Hastings Rally was notable for the fine specimens of closed coachwork which were seen in the Coachwork Competition. The winning car in the large car class was the 25 h.p. RollsRoyce, illustrated below, fitted with a four-door Touring Saloon by Park Ward.

The car is finished in pastel blue with a dark blue belt rail and silver roof and upper parts. The interior is upholstered in pastel blue leather. The colour scheme imparts to the car an unusual lightness of appearance in keeping with the lively performance of the chassis.

There are two sliding bucket seats in the front and the rear seat carries two or three persons. A large trunk at the rear is built integral with the coachwork and contains three suitcases. A picnic table and stools are also stored there. A luggage grid is provided and folds away when not required behind a hinged flap at the bottom of the trunk. A sliding _ sunshine roof is fitted, stainless steel wheel discs, two spare wheels with special covers, and the fourwheel jacks are operated by a detachable handle which is kept under the bonnet, together with the road tools. Spare petrol and oil is carried in a box in the chassis frame and reached through a hinged door

in the running boards, likewise a fire extinguisher. The lighting equipment includes besides Lucas P100 lamps a fog lamp and two spotlamps in the windscreen. The dual windscreen wipers are driven by cable from a distant motor, thus causing no obstruction of vision. The off-side window

is of quick drop type and semaphore indicators are recessed into the rear quarters.

Folding tables are fitted to the back of the front seats. When opened they reveal writing sets ad companions. A car heater which derives its heat from the water supply can be controlled by hand. The James Young Drop Head Coupe,

also fitted on a 25 h.p. chassis, should be an ideal car for the owner-driver. It is carried out on quiet, graceful lines, and Provides comfortable accommodation for five persons, with a large luggage locker formed in the back of the body. The folding head is exceptionally easy to operate,

and is designed so that it can be thrown back without having to get out of the car to fold away any of the hood material. More formal in treatment is the sedanca body built by Gurney Nutting on a 40-50 h.p. Continental chassis. The body is finished in black, relieved by a thin silver line at the waist line and on the bonnet louvres. The sweeping lines of the wings which continue into running boards without a break, are most effective, the latter being set off by chromium-plated slats. The forward extension of the hood fits on to cant rails, .giving the car, when closed, the smart appearance of a saloon. When not required the rails fit into lockers

in the doors, and the forward extension folds imperceptibly into the fixed-head portion at the rear.

The front of the car is striking in appearance with its large P.100 lamps, and an unusual radiator stone guard of diamond-section plated strips. The Chromos bumpers have moulded rubber ends saving the bumper bar from breakage.

A luggage trunk is fitted with suitcases, also a compartment for golf clubs and a spare supply of petrol and oil, and tools are stored in the lid, and a lamp inside it lights up the interior of the trunk.

Two windscreen wipers driven by concealed motors are used, and a Grebel spotlight is carried on the off-side. Mapreading lamps are fitted under the scuttle, and the indirect lighting of the instruments is controlled by a Rural horn ring on the steering-wheel, while a larger one is used for the horn. A Philco wireless set is carried in the forward compartment, and its controls are finished uniformly with the other instruments.

A folding arm-rest invisible when not in use, makes the rear seat suitable for 2 or 3 passengers. Tables with mirrors are fitted to the back of the front seats and cocktail sets are found in the rear quarters. The rear window can be lowered by means of a handle concealed in the arm-rest recess. 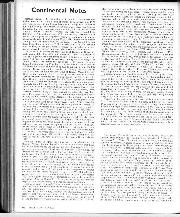 THINGS SEEM to be happening in France in a rather fast and furious fashion and on all manner of fronts. It would seem that 1970 may well go down in…

May 1970 Issue
By Denis Jenkinson 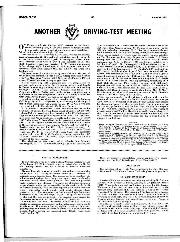 In our January issue, reviewing a clever German working replica of the Jaguar XK120 fixed-head coupe, we asked when the British toy industry would turn its attention to realistic motor-car… 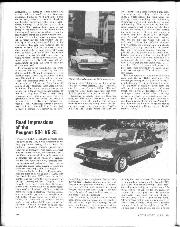 Having been a Peugeot advocate from the days of the 203, I was distressed at the long gap in our testing of cars from this exclusive, top-grade French manufacturer. However,… 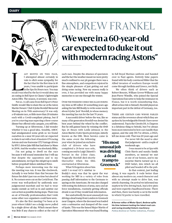 Racing in memory of St John Horsfall, the spy who helped topple Hitler

Last month on this page, I attempted almost certainly in vain to elicit some sympathy for the fact that for the first time in 16 years, I was unable to…