.. . . In spite of the banishing of the” basic” at the end of June, enthusiasm is still given plenty of expression. Joseph Lowrey is becoming an adept cycle-carist, having fitted an S.C. carburetter with foot throttle control to his s.v. 1928 Aero Morgan. He has also acquired one of the very early 1,100-c.c. sports Altas, with the gear-driven o.h. camshafts. Gordon Wilkins recently sold one of the two Type 328 B.M.W.s he has had since the war began (the ex-Wood car), but is laying up the ex-Aitken job, his existing mount being a f.w.d. Hotchkiss Ten. He seeks a really early veteran, so that he may retire into his garage and toil when private motoring is but a memory. He also possesses a Type 55 B.M.W. and the Singer Nine which he and Jones ran at Le Mans in 1939. Biggs has met -an Australian, now in London, who claims to have worked at Alfa’s in 1926, to have seen Ascari killed, ridden as mechanic to Brilli Pen i and then, in the States, worked on Lockhart’s 1i-litre Miller. Breen has a 7/-litre 36 h.p. Mercedes tourer of 1912 vintage, a perfect 1914 Hilhnan Ten and a touring 1923 G.N.—the last named needing some care and attention—for disposal. Any enthusiast who is interested may acquire all these delectable carriages for an expenditure of 52/ sovereigns. Robin Jackson, Hassan, Tyrell-Smith, Jan Breyer, Seaton Peacey and Newcombe are all with Bristol’s, along with Wilkins, who reports that they have by no means lost interest in fast motors. The twocylinder Riley mentioned last month turns out to be a 1908 model, with good tyres, but a missing valve cap ; she is valued at £10. A local scrapyard has a Clyno and late Swift Ten, alas ! too far gone to be worth saving ; but more cheering was the sight of an ” 8/18 ” Talbot 4-seater going well in Woking recently. The petrol position should stimulate interest in ” gasworks ” of an entirely new conception. Peter Clark is taking deli cry of a gas-producer Ford Eight from L.M.B. Motors, Ltd., after long experience of thi form of propulsion on his Delage, and 11. L. Biggs is considering something of the same sort for his Fiat” 500,” although, as a sideline, he craves a good motorcycle and would like to know what happened to the 600-c.c. F.N. which Patchett rode in one of the 200 Mile Sidecar Races, or the 348-c.c. unit-construction F.N.s, similar to the one he owned in 1930. Can anyone help ? Meanwhile, he rides a 250-c.c. 1930 o.h.v. Arid. We hear that Douglas Tubbs forsook his early Trisscum friction-driven device because it was in such poor order, but if anyone feels like a tough reconstruction job to keep them up to scratch for their war work it used to lie in a breaker’s at Bexhill-on-Sea—it is an early small car made at Zurich. The old 1k-litre supercharged Mercedes-Benz tourer, pre viously mentioned, is the property of Ian Metcalfe, of High Speed Motors, and would probably change hands for £50 or so. Walter Norton has returned from another long business visit to the States, and Harold Koppenhagen got married some time ago. Our congratulations, too, are due to Roddy Seys on his engagement to Anne Robertson-Rodger, Peter’s sister. We dropped two unfortunate bricks last month—the Vauxhall-Villiers was, of course, a 3-litre, based on the T.T. Vauxhall engine, and the photograph on page 46 showed V. S. A. Bigg’s Allard,

not Silcock’s—alas ! there is no opportunity for revising proofs these days . . . H. F. Hart, 1k-litre Singer “Le Mans” owner, was called-up over 18 months ago and has nosed around every village and town to which he has been moved in search of old cars ; he found, and drove for an hour, a 1912 Humber in daily use by a farmer. John Cooper has had a little time in which to poke around his newlyacquired F.W.D. Alvis, which seems to have a non-standard, blown engine, nonstandard steering parts and an oil filler as made up specially for the 1928 T.T. cars. He has bought two crank assemblies, together with four spare rods, for his ” 12/50″ Alvis-engined Salmson, these having solid, fully-machined circularsection duralumin con.-rods and roller big-ends, as specially made by Alvis, Ltd., in 1926-7, but never used. He plans, too, a large capacity oil pump, vertical racing Solex carburetter and gear ratios of 4.0, 5.14, 7.13 and 10.88 to 1—but it’s a case of “as and when.” He reports that Pat Stephenson is a Capt., R.A.O.C., out in India, and getting his copies of MOTOR SPORT more regularly than letters ; his ” Brooklands ” Riley Nine is safely stored. Guy Moss is a Sub-Lieut, in the Navy on M.T.B. repair work, his 3-litre and 6 Hitre Bentleys also stored. In case anyone wishes to motor rapidly on “Supplementary,” a 14–litre, supercharged G.P. Bugatti is reported in Derby, for sale at under £100 when reassembled, and the ex-Billy Cotton K3 M.G. Magnette is for disposal in Nottingham for £200. There is also a 13-h.p. Marendaz ” Special,” believed to have a rebored engine which needs fitting, for around £45, in the same locality. A. IL Bateson, of” Domus,” Beaconsfield Road, Woolton, Liverpool, is prepared to take any price offered for spare: from his blitzed 1929 Austin Seven “Special,” to help enthusiasts. There is an appeal for a good G.P. Salmson, if anybody has one

On March 8th the London Graduates listened to a most interesting and diverting talk by Mr. L. Pomeroy on “Lessons from Continental Cars.” The theme of Mr. Pomeroy’s arguments laid stress on the appeal of the Continental cars to the engineering mind. He asserted that in engine and chassis design and in the development of streamlining, with its attendant virtues, the Continental car was a long way ahead of English products. Only in the coachwork did English ears excel.

He allowed that the present home ‘market was more or less satisfied with the goods it was offered. But he held that with a return to peace-time conditions the prospective purchaser would be more technically minded and would demand improved performance and economy.

These arguments were very briskly discussed, nearly all the 28 members and visitors present contributing their quota of remarks. The general trend of the discussion admitted faults in English cars, yet held that many of the cheaper foreign cars were definitely inferior in quality ; even allowing for the fact, stated by a graduate from Vienna, that Continental cars for export were made to special material specifications.

Mr. Bramley summarised the discussion from the chair and proposed a hearty vote of thanks to Mr. Pomeroy, which was carried with enthusiasm. [We hope to report Mr. Pomeroy’s address more fully at a later date.—Ed.]

We believe the Film Show is scheduled for April 12th, not April 5th. See you there ?

News Of an 1,100-e.c. Alta, of which a soldier-man had to dispose before going overseas, resulted in a pleasing run on a cold but sunny Saturday afternoon amid the Surrey pine Woods to try to locate the car. The owner was, as it happened, away on leave, but before the H.R.G. hurried us home to a welcome tea a brief peep was taken at BroOklands and a centre-steering G.N. chassis with Austin Seven front hubs was located—and, what’s more,. was found to he for sale. Later, the H.R.G. repeated the run one cold evening, hurrying like anything, now four up, to get to the Alta’s garage before dusk, a fine, fast run across sandy heathland and down a long ribbon of road to the West, giving rise to many memories of similar runs in happier conditions, ere the night came down and blotted Out all view. The next evening the Alta was towed in, again as fast as possible in order to beat the black-out, the stupid home-made tail being Set so close tO the scuttle that the writer, wedged in the driving seat, lost all sense of bodily feeling before the destination was reached and could hardly be blamed for breaking the tow-rope before the fierceness of the brakes had been adequately assessed. The view over the low bonnet of the straight, tubular front axle and cycle-type Wings turning with the wheels, and an exposed prop. shaft and fabric universal joint milling round uncomfortably close to One’s left leg, aroused further tender memories Then the Gwynne has been piling up the miles in its own satisfying way, going up to one 750 meeting and then back beyond home, along that fast road through that fine piece of Hampshire scenery, between Farnham and Alton, in search Of a 1911 two-cylinder Renault reputed to live hereabouts. The search proved fruitless, but was repeated the following Sunday morning, a rapid return being made that we could lunch and, thereafter, take our place in a fully-laden

” Weinust not underrate our enemy . .

V-twin Raleigh tricycle for a journey to London, and familiar Victoria at that, to hear Laurence l’oitteroy address the I.A.E. The return was again made just before black-out, and four hungry mortals voted this 70 or so mile run well worth doingflRId(nIaJJ, on rather less than 14gallons of fuel, and as fast as any Austin Seven. By the way, again the Renault wasn’t located—it is ” Sarah,” the car which Mills part-exchanged to chambers for ” Agatha,” and which Derek Matthew s bought and drove home in when his Alfa-Romeo blew up at Doll ington.

Matthews sold it to a friend ; if anyone knows where the car is now, please send us a postcard. 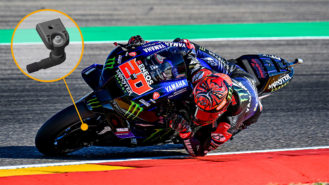