It’s rather incredible, but yet anothei s.v. Aston-Martin has to be reported on as coming to light ; a rather poor specimen now being restored to really good order by G. E. Kitchen, of Sheffield, who estimates that the work will occupy the best part of a year. We gather that the polished aluminium and copper work is already coming up well. News comes in that Hugh Pelnii ire, who used to run a blower Bentley and a 328 B.M.W., and Ron London, of sprint motor-cycling memory, are beth in the R.A.F., as, now, is Gordon Woods. The last-named has been in hospital, but looks forward to finding a ” Silasley ” Frazer-Nash for use later on. Lt. J. P. Shenton, R.N., also seeks any sort of ‘Nash of the better sort and, like many another, wonders where they have all gone to. Then cars have been changing hands. Boddy having sold lii LanCia ” Lambda ” to Capt. Bill Bailey. who already awns a Seventh Series saloon, has acquired a 1028 lug-port, short-stroke ” 12/50 ” Alvis 4-seater from le/0 Donald Parker. He insists on referring to it as ” a touring car pretending to be a sports car,” and it does weigh 22 cwt., but it actually goes rather quickly and is smooth and unobtrusive wit hal. Nevertheless, Buddy has his eye on an 0.M., they Say. Sqdn. Ldr. D. IL S. Kay has bought ‘Daniel’s Fox & Nichol Talbot (PIA.), and Dr. Warnock has acquired a 1928 1,500 c.c. Fiat and a 1937

” Agustin” All these owners seek instruction books, but some have been able to borrow from the MOTOR. SPORT Library. A model electric Bugatti has come to light in the North, where a G.P. or Type 40 Bugatti is sought, while Battersby has acquired a Ranelagh-bodied 1,500 e.e. Fiat and a 1925 Lancia “Lambda ” Weyiniann saloon, nicely preserved. Out in Australia A. .1. Roberts has found a 1932 “88/250 ” SS I’ Merchies-Benz in many and varied pieces, and seeks general information or an instruction book as he is rebuilding it, and would correspond with any SS I’ en h itsiast. Major Hordern, now with the would like to find a saloon Bent ley (old school) for use on his return to England—he seeks a saloon as a dutiful married man, but says that his wife liked the open 41-litre which lw used for three years and which, he believes, is still in Cairo. HeI had a.so an early ” Blue Label ” in Quetta, engine No. 69.M. S/Sgt. Norris, R.E.M.E., has conic upon a rather hard-used 1933 M.G. Magneto. (1?0372) with E.N.V. pre-seleel or box, and seeks advice on rebuilding and especially on a means of obviating plug oiling. Norris rode a motor-cycle in competitions before the war and has a Useful workshop and a lathe. Reginald F. W. Potter has nearly completed a Of-litre Bentley rebuild, and would like a photograph or information about the

Gurney Nutting Weymann saloon owned by Capt. Woolf’ Barnato in 1932. And Roy French has bought a 6-cylinder Marendaz-Special from Whincop, while Grosseurth has John Cooper’s AstonMartin. So there is plenty going on. Lt. R. I. Foster, R.N.V.R., would pay a good price for a nice 3-litre Bentley. Lt.-COI. T. Luxton, of Australia, who has owned or shared four Bugattis, two Lagondas, a blower 41-litre Bentley, and some lesser things, now has a Type 43 Bugatti (engine No. 43160) which has run 20,000 Miles, and is ” in really splendid

order.” The phosphor-bronze big-cud cages have been replaced by steel cages carrying three fewer rollers than formerly, with very satisfactory results. Lt.-Col. Luxtou would like to hear from other owners of these cars and to receive advice re carburation. His is apiiarently the Only Type 43 in Australia. Capt. Harry Scatter, who used to perform well with a Bugatti in Scottish events, recently returned home from the Middle East.

B. W. Cox, 263, Ware Road, Hertford, Herts, has copies of MoTon Srowr, The Autoear and The Light Car from December, 1940, to date for sale, if anyone is in need of back copies.

A Liverpool firm is preserving a fine example of 1927 ” 12/50 ” Alvis beetleback sports 2-seater, in polished alutitinhim with red upholstery, for a former salesman now in the lt.A.F., and they have another similar car for sale at £75, finished black and red. The first-mentioned Alvis has a Claudel-Ifobson carburetter and a Scintilla magneto. Leonard Potter drives a Fiat 500 these days, but dreams Of his Type 55 Bugatti, which is, of course, the ex-Whincop car. Birkett motors again, most effectively, in his Type 40 Bugatti, and Ballamy, apart from having his fingers in all manner of unmentionable war-winning pies these days, still undertakes occasional jobs fur the enthusiast, is experimenting with special suspension and improved grciund clearance on a ” 4/4 ” Morgan, and retains his special Ford Ten and the is.s. Type 37 Bugatti. Foxlee’s Alvis ” 12/50 ” has now done over 30,000 miles since war ”mile and hasn’t had the head removed yet : he is building up a ” special ” from a 1920 saloon chassis, 1932 ” Silver E: L!

beetle-back body, and many other ingredients. Diet: Caesar’s scheme for a post-war prod it etion sports car proceeds apace, and Midge Wilby has Atalantas and two Meadows FrazerNashes in store. She intends to alter the power plot of one of the ‘Nashes.

The Rembrandt Brains Trust will take place on April 16th, preceded by a lunch. Tickets for the combined function cost 15s., and attendance is limited to 100 souls, as the hotel cannot cater for more. A limited extra number of tickets for admission to the Brains Trust only are available at 3s. each-it’ any are now left ! The session starts at 2.30 p.m. approx. Lord Howe, President of the 13.11 .D.C. and E.R.A. Club, hopes to take the chair. He was asked to name a charity to which profits accruing should be paid, and he has nominated the Royal National Lifeboat Institution, of which he is VicePresident. At last Donald McCulloch, Bentley enthusiast, and B.B.C. Brains Trust Question Master, is to perform this function on behalf of the motoring enthusiasts—he has been too fully occupied to attend on previous oecasions. ‘Written questions are taboo this time, so think up some verbal ones before April 16th, because on you they will rely. All is Set for a most imposing gathering, and these meetings, organised by A. Rivers-Het eller, do a great deal of good for the Sport. Tickets are (or were) available frinn him at ” Noddings,”

Mr. Cecil Kimber’s postponed talk on ” The Sports CarIts Past and Future,” will be given at the Graduates’ Meeting of the institution of Automobile Engineers, at Hobart Place, London, on April 23rd.

Quite one of the best bits of current news is to the effect that the B.A.R.C.

hopes to resume net Brooklands after the war. We teal known for some time that certain motor-c- etc riders had high hopes for Brooklamis• future, and now an official Statement has been issued by the B.A.R.C. It is likely that several years will be needed to restore all parts of the famous 37-year-old course.

We arc desirous el’ obtaining old. copies of The Autocar, The Motor, The Light Car

and Cyelecar The Auto-, bound or unbound, to consolidate our records. If you can help, please contactV. B., 70, Bolingbroke Grove, S.W.11.

The next meeting of the Midland Motoring Enthusiasts’ Chili is due on April 5th, at 7.30 p.m., at the Windsor,” Cannon Street, Birmingham. Some 45 members and friends attended the Mareh meeting, when a film loathed by Mr. Chris.

Southall and the Hagle. A . was shown.

An attempt is being made to form a Vintage mid Spurts Car Club in Sydney, fmiwited on page 78

N.S.W., and prospective members include owners of Alvis. A.C., Amilear, 1 i-litre supercharged Alfa-Romeo, various Bugattis. Frazer-Nash, Riley ” Redwing,” Sunbeam, Bentley, ” :10/98 Vauxhall, Austin, and various ‘• specials.” The pJ) fem. secretary has a very immaculate A.(. Six of about 1924i vintage, and the organiser, R. Beal Pritchett. i uitting a Alere(“qks engine into his ” 20, It Cross ley. I )etails from the latter :It 1. Phillip

Recently, in the course of official duties, it became possible to gain experience of two ears in one day, over approximately the same distance of about. 80 miles, both of them 1928 4-cylinder 1 ?-litre jobs, yet vastly different in character. They were, respectively, a big-port ” 12’50 ” Alvis I–seater driven by ourselves, and a Type 40 Bugatti 4-seater conducted by holland Birkett. The Alvis motored effortlessly and in silenee, at a cruising 48 tit.p.11, or so, running the speedoineter easily to its recording limit of” 60 ” on demand. The Ilugatti, limited to it maximum of 3.000 r.p.m. on account Of the setting or its 5.1 . carburetter, nevertliele,;s cruised strongly at approximately 51 m.p.h., to U spirited tune front the exhaust. Whereas II e Alvis indirects (selecte(l r.h.) made considerable noise. those of the Bugatti (selected centrally) made ii tore, but ileasantly, and while the Alvis suspension was on the soft side, the Bugatti’s springs hardly appeared to work at all, although the degree of comfort was good. The Alvis was so unusually quiet for the tyl c. the timing gears being in excellent fettle and the transmission sound, that those who rode in it likened it to a Railton, the power building up smoothly and effortlessly, and the car running with but an occasional stutt;‘r or report from the silencer. The brakes were powerful, if somewhat spongy beneath the foot, and the Nlarles steering NVIi‘? light in almost modern-car manner. The Bugatti gave a deep-throated rear as the revs, rose, the brakes were good but rather harsher titan those of the Alvis, and steering and roadholding naturally first class, four up, although attention to tyre pressures would probably have produced even inure wonderful results. The Alvis

attention, the Bugatti one plug change and a little water. Moral : even ears of like vintage and capacity can differ vast ly.

This month’s cover picture depicts K. N. Tlutchison’s V8 Allard-Special in the L.C.C. Three-Hour Sports Car Race at Brooklands in 199;. The car ran well, but lost its fan-belt and tended to suffer that overheating which has worried the Ford VS engine in other long-distance events. Sports car racing is exi wetech

L)( popular after the war, and this Light Club Car event represented an interesting attempt to stage a race NVItiell WZIS of considerable importance without being too exacting for the amateur. 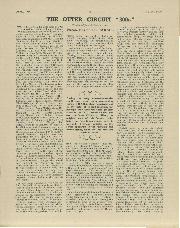 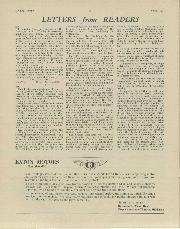