Business as usual for a community in mourning
Belgium, June 5-7

Spa was a nine-mile blast on closed public roads through the Ardennes forest, the course climbing and dipping through valleys, bordered by trees, stone walls and farmhouses. It was also prone to sudden severe rainfall, a terror ride that even by the raw standards of 1970 was unreasonably dangerous. Even for the most hardened pro this, yet more than the Nürburgring, was the big bogey track of the season. And Jackie Stewart was its sternest critic: his accident here in 1966 had triggered the safety battle that was still being fiercely fought, not least with this circuit’s management. “I defy any man to say he likes the place,” said Stewart in his book Faster, “to tell me that he doesn’t think twice before leaving home, and continue to think about it the night before he’s going to drive.” Everyone had extra reason to be hyper-attuned to the sword at their necks; on the Tuesday before the race, Bruce McLaren had been killed testing his Can-Am car at Goodwood, a 130mph impact with an obsolete concrete bunker for a marshal’s post that was no longer there. The shattered McLaren team withdrew its Belgian entries and a black cloud fell over the entire community. Just two years earlier, Spa had been the venue for Bruce’s first grand prix victory for his team, the foundation of a golden future he wouldn’t see.

By the time Robin Herd finally began to design the March 701, there were just three months to go before five cars had to be on a container headed for South Africa. “That made a lot of design decisions for me,” Herd says. “I had to use proprietary parts that were readily available. The most difficult was the radiator, a Serck unit. It was big and heavy, but had the virtue that it already existed. It had to go up front, where there was room. Because there was this bloody great big radiator, to keep the fore and aft centre of gravity where it needed to be I had to put a hideous monstrosity of an oil tank on the back. That was the only way to get the weight distribution right within the time constraints. Because that made the car potentially heavy, I had to keep it as short as was feasible, while still having the necessary fuel tank size. I did these detachable auxiliary tanks outside the tub, so you didn’t need to carry around all this extra tankage when it wasn’t needed. That helped me keep the wheelbase short and the weight down. I farmed the design of these out to Specialised Mouldings and it was Peter Wright who did the lovely inverted aerofoil profiles.” Had Wright’s venturi shapes been boxed off and fitted with skirts, the 701 would have taken F1 into the ground-effect era seven years early…

Stewart described drivers as living “up on a cloud” – by necessity when they were in the car, but also, some more than others, outside it too. Some refused to come down from that beautiful place, wanting no part of the grimmer side of reality, perhaps seeing themselves the way an outsider – a fan – might; in a heroic light, backlit by the sun. Pedro Rodriguez was like this: he bought fully into the romance of it all, drove with the sort of reckless abandon that he might have admired himself, like an actor playing the self he wanted to be. With many followers seeing F1 almost as a fantasy, an escape from real life, Rodriguez’s attitude and actions struck a powerful chord. So when it came time for him to race in his home Grand Prix in Mexico, the final race of the season, it made perfect sense that his countrymen breached the barriers and sat on the grass bordering the track. They wanted to share the risk with him, to be as heroic as they saw him to be. Even as he and Stewart walked around the track before the race, pleading with them to go back behind the barriers, they simultaneously applauded and ignored him.

Stewart had hustled his March around the principality in a time out of reach of anyone else to secure pole. The 701s were working well, for Stewart shared the front row with the works car of Chris Amon. Tyres played a part, too: Dunlop had produced special rubber that gave Stewart an edge. Amon was using a new Firestone, the YB17, with even thinner treads than before: it put more rubber down but was not available in a soft qualifying compound. On Thursday Amon was quickest for most of the session until Stewart tried his Dunlop qualifiers and eclipsed him. With just a few minutes left Amon went back out to beat Stewart’s new benchmark but encountered the tardy BRM of Pedro Rodriguez through Casino. As Amon went to pass he was so intent on shaking his fist that he missed his braking point for Mirabeau and hit the wall. An unfortunate time to lose competitive momentum, given he had just won his first F1 race – the non-championship International Trophy at Silverstone, where he’d beaten Stewart fair and square. That victory – March’s third in four races – had at least eased
the Amon/March relationship for now.

Stewart made his impassioned plea to the other drivers that, if safety demands were not met, they should refuse to race at the Nürburgring. “Those little fir trees you see beyond the edge of the track aren’t little trees,” he said. “They are the tops of very big fir trees, 200 feet tall. That’s the size of the drop.” The group was wavering until Brabham, taciturn old Jack, sided with Stewart. Rindt, who had not retired after all, volunteered to tell the German authorities they were not racing at the Nürburgring, but instead at Hockenheim, where Rindt took his fourth consecutive victory. Two weeks later, at a magnificent new track in the foothills of the Zeltweg mountains, Austrian fans got a chance to see their new national hero in action. Their last, as it turned out. He retired with engine failure, but spent several hours afterwards signing autographs. From the pits roof he had a perfect view of the valley, the snow-covered peaks of the mountains and, in between, the tree line, above which the air is too cold for them to grow. Jochen was breathing pretty thin air where his ambition had taken him. It was a beautiful scene, even more so in tragic hindsight.

For a heady, flashing moment, it was Rindt’s time. He was everywhere, epitome of the 1970 racing driver. His overalls were brilliant white, his tousled hair golden and the summer sun shone on both. Then he was gone. It was characteristic that he had planned what he’d do when he became champion before he’d even won a GP. He knew exactly how good he was, even if circumstances hadn’t quite aligned. They would do spectacularly in 1970 and, pre-season, it was obvious to almost everyone it was just a matter of time. But no 1970 racing driver truly knew how much time they had; so with the crown there for the taking in his Chapman wonder car, the narrowing survival odds were coming from the other direction. Which would get to the line first? Tragically it was to be a draw. Although the last four races of the season played out without him, when he won the German GP in August he had unknowingly achieved his ambition. He succumbed to his injuries in the wreckage of the Lotus 72 at Monza a month later. What sort of game was this where the guy who beat all the rest was slain by the sport itself? That encapsulated its random obscenity.

It was beautiful back then, but obscene – a time of lethal innocence. At rural Clermont-Ferrand they set up their paddock on rough ground and unloaded their gorgeous, bright missiles. Twenty men in a variety of shades, sideburns and flares changed into fireproofs in the back of trucks vacated by the cars. As spanners clanked and engines came to life – spluttering at first, their high compressions, extreme valve timings and rudimentary mechanical injection making them sore-headed in the mornings, then progressively snarling and barking as they warmed – drivers walked up to the pitlane. Cars were wheeled into the back of the wood-and-scaffold garages where their pilots threw first one leg, then the other, over the chassis side into those snug cockpits. There they sat in their flimsy aluminium tubs surrounded by fuel tanks, feeling ridiculously invulnerable in designs that had never been crash-tested other than for real. Seatbelts pulled tight, gauges all reading as they should, the cars nosed from the garage’s shadows into the valley’s twists, then the hard shove of wild acceleration, the brain recalibrating itself to this pure existence where only now exists, slowing down that insane footage, opening up the field of vision until the speed feels unforced, natural. Just the unfurling ribbon of road with its braking marks, turn-in points and apices. No questions, no doubts: just sheer cliff faces passing inches away in an irrelevant 180mph blur.

Other than the Cosworth and Ferrari, the only other engine to win a race was the BRM V12 that triumphed at Spa. This Geoff Johnson design had been around since 1968; for 1970, Aubrey Woods replaced its original two-valve cylinder heads with four valves, releasing a few extra horsepower. It was reckoned to be good for 425bhp – about 10bhp down on a standard DFV. Amazingly, it weighed just 3kg more than the Cosworth V8. But there was a reason for that, as BRM’s designer Tony Southgate explained in 2013. “It was very neat, only two inches longer than a DFV. It had been achieved through being the bare minimum in every section – and that was its fundamental problem. It was just too marginal, too flimsy. I realised that the oil system had to be as good as I could possibly make it. I knew that we had to circulate the oil as fast as possible so we uprated the oil pump and put a bloody great 4.5-gallon tank on the back in time for Spa with a massive feed pipe. Theoretically it could recirculate the oil in about 20 seconds, though in reality the bearings not working properly would have slowed that down a bit. Anyway, it worked for Spa and it all held together – much to Chris Amon’s annoyance!” 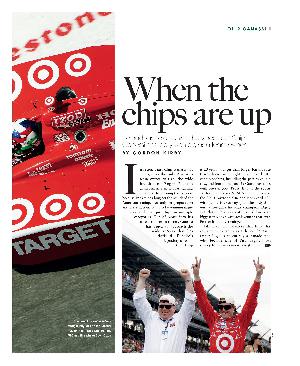 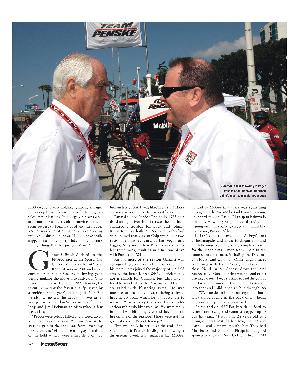 When the chips are up 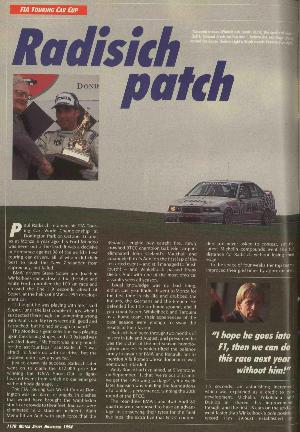 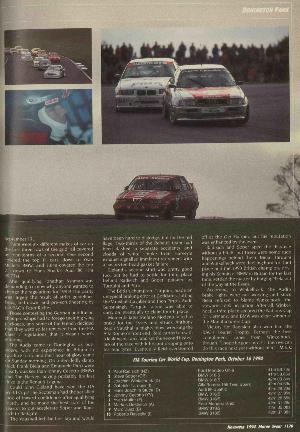 Radisich patch. Paul Radisich retained his FIA Touring Car 'World Championship' at Donington Park on October 16 and, as at Monza a year ago, his Ford Mondeo was never out… 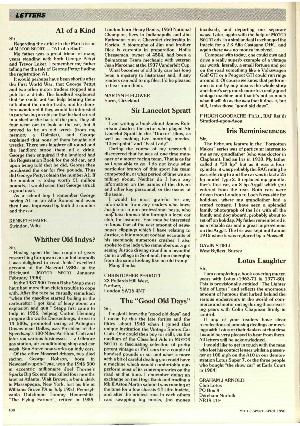 Sir, I'm glad I knew the "good old days" and I mean by this the late forties and the fifties' about 1948 when I joined that unique institution the Vintage… 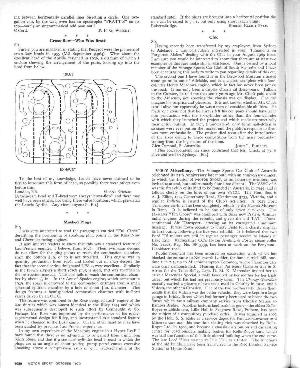 Sir, Surely you are mistaken in stating that Peugeot were the pioneers of cross-flow heads in 1955 (MS September p.964). What about the excellent head of the Aprilia designed in…