Compare this uncluttered pre-race scene from Detroit in 1984 with even the most modest driver today surrounded by an army of personnel and paraphernalia seemingly capable of launching a space probe. This may have been halfway down the grid, but it epitomises the days before data dominated every move of man and his machine.

Martin Brundle sorts out his seat harness, assisted by Kevin MacLeod (sunglasses), while Ken Tyrrell leans into the cockpit and Roger Finnis uses an umbrella to shield his driver from the heat of the Michigan summer sun. Liz Brundle stands alongside Maurice Philippe, designer (with Brian Lisles) of the Tyrrell 012. In the foreground, the weighty air starter for the Ford Cosworth DFY V8.

I watched the race from inside the final chicane, a fast right-left flick onto the pit straight. It was the perfect place to witness Brundle really hustle this nimble little car and embarrass the more cumbersome turbos as he gradually moved from 12th to second and set off after Nelson Piquet.

Any thought of taking a run at the Brabham- BMW as they powered through the chicane and aimed for the chequered flag was to be ruled out by Piquet’s jubilant team jumping onto the narrow track. Looking back at the potential dangers associated with such a traditional celebration, the irony is that the Brabham chief mechanic was Charlie Whiting, later to become the FIA’s highly respected safety delegate. 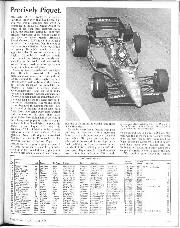 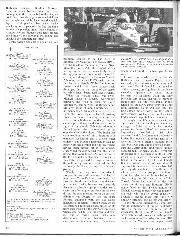 In many respects, it was the end of the road for Tyrrell 012. This car would be written off a fortnight later in Dallas. As Brundle recovered from smashed ankles, he learned that all his good work in Detroit had counted for nothing.

Tyrrell would be excluded from the race and the championship for allegedly circumventing the rules by adding ballast during the final pitstop. It may have been a trumped-up charge, but it conveniently removed Ken as the lone and strident voice against a fuel capacity regulation designed to favour turbos.

At least Brundle still has the trophy as a reminder of a truly outstanding drive.