In 1931, desperately in need of a powertrain that cost less to build and run in the wake of a rapidly changing world that had turned against gas-guzzling motors, Bentley installed a 4-litre engine designed by someone else into its full-sized 8-litre chassis.

It wasn’t even designed by Bentley and was quite unlike any other engine it had used to date. And it didn’t work: just 50 of these Bentley 4-litres with their Ricardo-engineered straight sixes were built before the receivers shut down the original Bentley Motors for good. Spool forward just over 90 years and Bentley is reacting in the same way as the automotive landscape changes once more, using another downsized engine designed by someone else (Audi) in its full-sized Flying Spur chassis. And while sniffy punters only had to point to the 4-litre’s pushrod valve actuation to suggest it wasn’t a proper Bentley, this time they can look at its V6 hybrid configuration or the fact that it’s the smallest engine ever seen under a Bentley bonnet, its 2.9-litre capacity being beaten even by the 3 litres of Bentley’s original engine, which first fired up on a bench in New Street Mews in 1919. 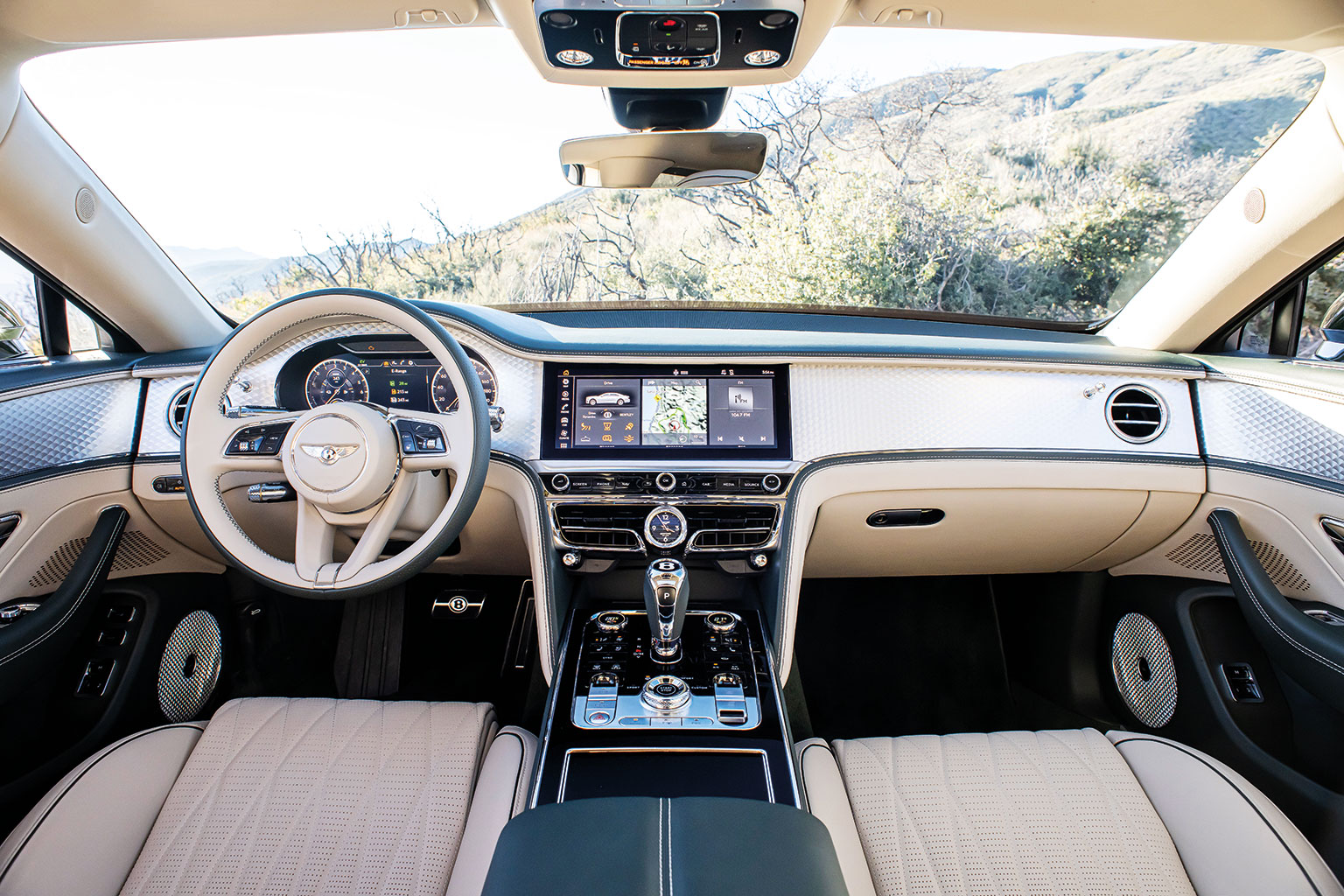 The interior is Bentley through and through, while the central touchscreen can be divided into two or three windows

But while there may be some similarities in what is happening here, the context as to why it is happening could scarcely be more different. Unlike then, today Bentley is doing pretty well, selling 14,659 cars last year, a 31% rise on 2020 which itself was already a record year for the firm. And all this with a computer chip crisis and pandemic gripping the world. The idea is simple enough: for those who’d prefer the more benign tax regime and running costs of a small V6 hybrid to the thunder of a V8 or the towering punch of the W12 motor, the Flying Spur Hybrid provides all the image but less of the financial pain. Nor will you suffer much in terms of straight-line pace, for by the time you add the power of the electric motor to that of the V6 engine, you’ve a car with performance that’ll match that of the Flying Spur V8 all the way to speeds most of us will visit rarely, if at all.

Moreover because it will do perhaps 27 miles on electrical power alone, you can now use a Bentley for your shopping and school trips and, so long as you charge it at home, it’ll cost pence to run. And while traditional Bentley owners may care little about such cost considerations, the fact you’re swept silently around the place on a magic carpet of electrons will surely count for something. Of course there is a downside; more than one in fact.

While the 2.9-litre twin-turbo Audi engine is smoother and vastly more punchy than the 3-litre single-turbo unit used in the Bentayga SUV, it’s still just a device for doing a job. It’s an off-the-peg motor at a price point where you might think you had a right to something a bit more tailor-made. Its voice is unremarkable in the lower and medium regions of its rev range and just a little strained at the top end. Which isn’t very Bentley at all. Then again, nor is red-lining your motor.

Bentleys should be all about accessible torque and thanks to the electric motor providing a strong slug at zero revs and no miles per hour, the Flying Spur Hybrid never has to go hunting for a lower gear or feels sluggish. And in some respects, because electricity can fill those small but discernible gaps in the flow of power between gears, the hybrid is more refined than the petrol-fed Bentleys. And this is important because this is the first generation of Flying Spur and, indeed, the first four-door Bentley fitted not with a conventional torque converter automatic but with a quicker, sharper and, ordinarily, less smooth double-clutch gearbox. Other minor inconveniences include a reduction in luggage space from 420 litres to 351 litres and a fuel tank capacity of 80 rather than 90 litres. Well, all that hybrid stuff has to go somewhere… And it’s heavy. At 2455kg it weighs more than a W12 Flying Spur with an engine of over twice the capacity. 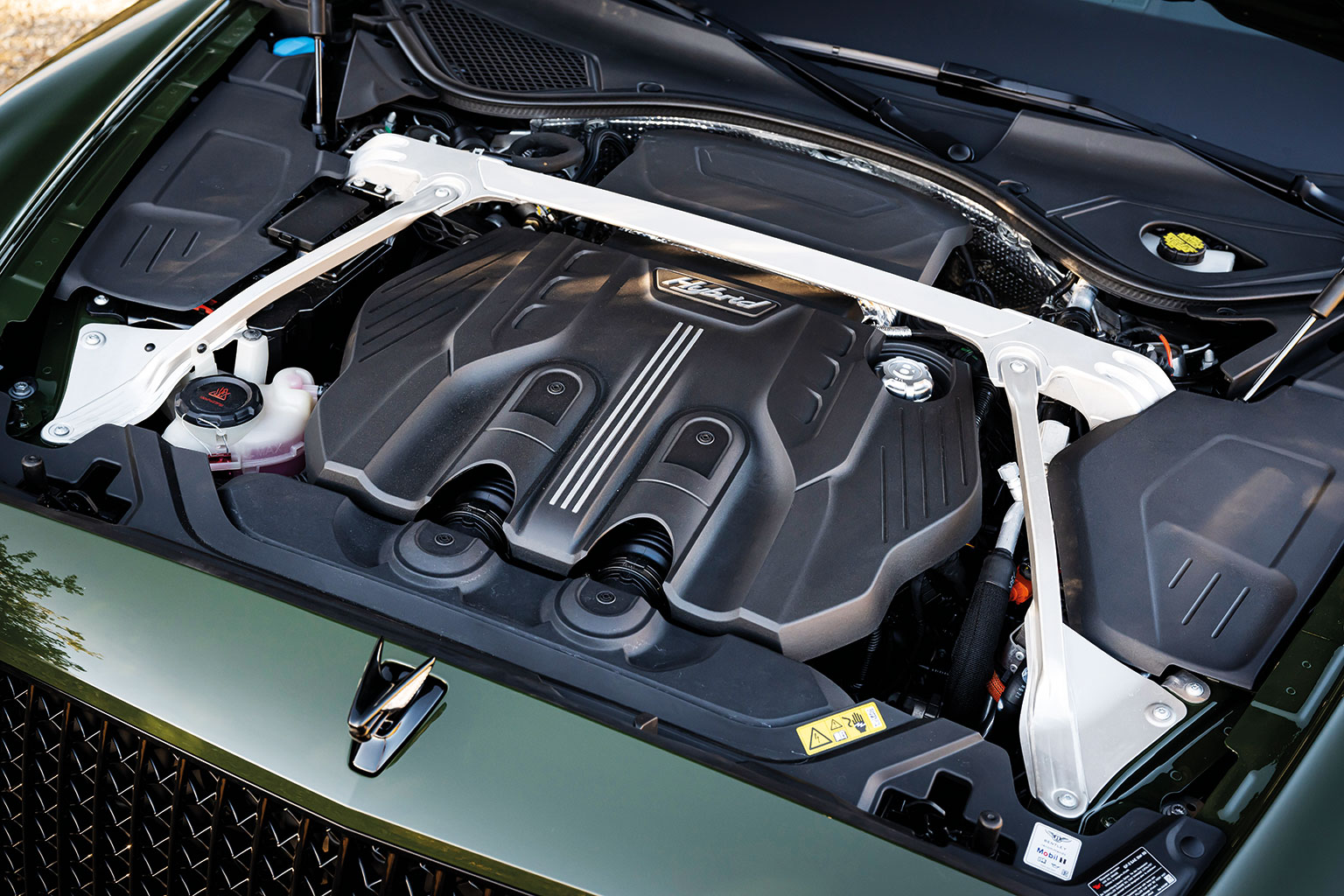 But it never feels cumbersome. Despite its mass and decidedly generous wheelbase, the combination of three chamber air springs, active anti-roll control and four-wheel steering combine to make even this heaviest of Spurs more deft than its appearance would suggest. Unsurprisingly, it likes faster curves more than tight corners, but come what may it commands near- miraculous authority over its body movements and with accurate, sensibly geared steering, the Flying Spur Hybrid is several streets better to drive than its on-paper specification would ever suggest.

As good as Bentley should be? Given some of the whales from its past and the fact there is now an even heavier (and higher) SUV in its model range, I’d say so. But there’s another Flying Spur hybrid I want to drive even more than this. It’s the one fitted with the 4-litre V8 engine producing not 536bhp, but 670bhp, dwarfing even the 626bhp W12 engine, and which comes with enough torque to reverse the rotation of the earth. The only reason I’ve not driven it yet is that it doesn’t exist. Officially at least. Ask if this is the engine that will replace the W12 and you get a Francis Urquhart “You may think that, but I couldn’t possibly comment” reply, which is corporate speak for “yes”. I can’t wait. While the Flying Spur is good with a hybrid V6, the V8 hybrid should be something else.