I’ve been asked a few times now how I think the Mercedes team can pick itself up after the controversy at Abu Dhabi last season, and the simple answer is: it really doesn’t need to.

If you’re Mercedes-AMG, the team is still well and truly on top of the world and last year won its eighth-straight constructors’ title. Yes, the drivers’ title may have been snatched away, but for the team it was very much the usual business of winning. 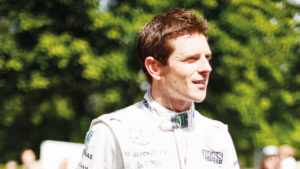 In that respect, there’s no reason why Mercedes shouldn’t have another world-beating car this year. The formula at Brackley is the same. There are the same great minds, the same resources, so why wouldn’t the team go out and design the best car, yet again?

However, I do think the team was bruised by what happened in Abu Dhabi, and it goes deeper than just Lewis. I think a lot of staff suffered that heartbreak, too. There’s such a culture of winning at that team after seven years of doing the double, that to suddenly lose one, and in the manner that it was lost, came as quite a shock. I think the whole team will be fired up to put that right this year.

I’m pleased Lewis Hamilton will be back on the grid for this new era of F1 as there was a lot of speculation that he wouldn’t be. I can’t speak for Lewis, but Abu Dhabi would have hurt hugely. But I’d know that I will likely still have the tools to do the job, with no reason not to trust the team to give me another world-beating car. The team has invested so much time and effort into this year’s new-generation car that it could even end up being an even more dominant car than we’ve ever seen before. We just don’t know.

What better way to bounce back after such heartbreak than to have all cylinders firing, win that eighth title, make history, silence a few critics and get the job done in a new era? It would put right all of the pain from last year. I’d find that a huge motivator for this season.And then there’s the situation with George Russell, which is very exciting. Of course, there will be question marks over promoting any driver from the back of the grid to the front: how will he fare in the spotlight, can he push Lewis for the title in a way Valtteri couldn’t, will a hungry young team-mate upset the balance of harmony at the team? But what we do know is George is incredibly dedicated, and he’s already putting in the hard hours at the factory. He’s very confident in his ability, is a hard racer in wheel-to-wheel combat, and certainly has the raw pace in qualifying, but so did Valtteri. What he lacked was Lewis’s innate ‘feel’ for the tyres over a race distance that made him so devastating to race against. You need somebody who can do that.

Hopefully George will have that feel too. How he copes in the spotlight when the world is watching his every move… it’s a big challenge, especially when trying to move on from mistakes. You can never underestimate that pressure and what it does to drivers. Joining Mercedes will bring a lot of pressure, but I can’t wait to see how the season unfolds.