Mention of the almost legendary Sequeville-Hoyau, even amongst the knowledgeable, usually arouses interest, but produces no real evidence as to what this early small car was like. Beyond the fact that it was built regardless of expense, as a sort of light car version of the Rolls-Royce or Hispano-Suiza, and that very few examples could ever have reached this country, no one has contributed anything concrete about this elusive car. We recall a rather pathetic letter which appeared in a weekly motor paper not long after the termination of the last war, in which someone who had paid a deposit on one of these cars plaintively asked whether anyone had actually taken delivery of one and, if so, please what were they like. We are now able to say something of this car, and this is possible, curiously, by reason of finding just such a car, partially dismantled but in very fine condition, occupying a garage in the very country town where this paper is now edited.

The car in question is a sports 2-seater with helmet-type cycle wings and aluminium “aerofoil-section” running-boards or steps, and 4-piece V screen with glass side extensions and two-colour paintwork typical of the early twenties. The Sequeville-Hoyau, according to Doyle’s, was made by S.A. des Ans. Ets. Sequeville-Hoyau, Avenue Laurent-Cely, Genevilliers, Seine, from 1915 to 1924. The example we inspected is probably of about 1922 vintage, being rather like that illustrated in a Paris Salon report in The Autocar of October, 1921. The engine bears a plate on the offside bearer stating it is No. 14, type AS.2. Another plate on the dash gives the chassis number as 12, the h.p. as 10, and the chassis weight as 550 kg. The engine is a 4-cylinder side valve, with a massive alloy crankcase. The valves are on the near side and the carburetter appears to bolt on to this side of the block and feed through an internal passage. The block is an insignificant iron affair with screw-in valve caps, the head being non-detachable. The connecting rods are tubular, beautifully finished, the crankshaft appears to run in three bearings and to have circular, fully-balanced webs, and the steel pistons are of slipper type each with three rings. The engine and gearbox are built in one unit, but the small flywheel is exposed, and appears to house a multi-plate clutch. This unit is 3-point mounted, on a massive inverted U extension of the crankcase at the front and behind the compact gearbox at the rear. The pedals are very small and neat, and there is a delightfully stubby little right-hand gear-lever, working, surprisingly, in a ball-gate. Outside it is the handbrake, working very smoothly on its concealed ratchet, from which it is freed by depressing a wooden knob.

Prolonged study reveals some very high class workmanship. The fascia is of highly polished mahogany, which matches the decking of the boat-like body. The imitation Rolls radiator bears the name in open-work brass lettering, and a badge comprising a narrow shield encompassing the letters “S.H.” This same motif is found in the footboard ramp, which is held in place by numerous little handscrews. The lampswitch is in the steering wheel centre, and the instruments include a 100 k.p.h. speedometer, thermometer and clock. The steering box is a beautiful piece of machining. The magneto is on the near side of the engine, and the dynamo appears to be driven transversely from the timing gears on the off side at the front, while the starter protrudes somewhat into the driving compartment. The fan is belt-driven and very sturdily mounted, and there is a convenient sump-drain control at the rear of the crankcase, on the off side.

Our examination of the car had necessarily to be cursory, but we noticed a spring-off radiator cap with elaborate wing-motif mascot, rear wheel brakes, 710 x 90 tyres on wire wheels, long half-elliptic springs all round with hydraulic dampers, and a rear fuel tank with inset gauge reading to 40 litres. Behind the tank were trafficators reminiscent of a Talbot, probably a later addition. The car’s electrics were Paris-Rhone. Rough measurement of the bore gave a figure of approximately 61 mm., but we believe that the correct size is 60 x 110 mm. The registration number is a London one and we believe the car was bought from a doctor by the present owner in 1926. That is all we know of the Sequeville-Hoyau, except that it might be worth somebody’s while to assemble and play with it. 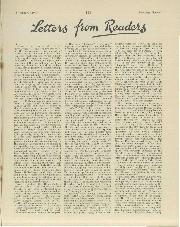