Sir, Since motoring as a sport is nonexistent in Canada, interest provoked by

13 years of subscription to your excellent journal has been of a passive nature. Competition on wheels has been, for me, limited to motor-cycles, with decidedly English make preferences. There appear constantly deprecatory letters and articles about the American car. This attempt of mine to appear in print is to take up its defence by 161 ointing out what we in the U.S. and Canada require from an automobile. Short journeys in the usual run of English car sometimes move me to writing with con

siderable invective, but invective seldom educates, so I shall attempt to remain factual.

First, I am not unfamiliar with English cars, for there are many of the usual Austin and Morris Tens and Eights, along with a few T-type M.G. and isolated examples of other makes, in my home town of Vancouver, B.C., and in the capital city, Victoria. This is the only part of Canada where the English car is not a novelty. The reason is that climate and the few roads of the lower mainland are suitable for its operation. No extremes of heat, no sub-zero winter ; briefly, much like the climate of the country of its origin, and with fairly good paved roads surrounding the area. The price of a ” Ten ” compares with that of the popular American, the Ford, Plymouth or Chevrolet.

Throughout both countries there are areas with many miles of good roads, concrete and macadam, but there are also many thousands more that vary from cart-tracks to good, hard gravelled roads. Deep and shallow ruts from dried spring mud, ruts from frozen snow, snowdrifts and mudbanks, potholes and washboard, all are encountered, and in temperatures varying from, 50° F. to 105°F. That, as nearly as can be generalised, sums up the conditions encountered. Now let us examine what the average customer expects from his motor car. First, that customer will vary from a farmer who loads and overloads his car with every conceivable material and gives the vehicle a minimum, or less, of attention, to the socialite who is chauffeurdriven about the paved streets of a large city. There is just the average owner who may drive 10,000 miles a year or less, and the salesman, thousands of Whom put in 50,000 or more miles in the same period. There are the taxis that run up vast mileage under the bad conditions of traffic operation and a multitude of stops and starts. To each and every one of these people the car must have ample room in it—for three in a .coupe and six in a sedan or coach (4-door and 2-door saloons). A heater must be accommodated

out of the way, usually a radio built-in, and there must be ample storage space for luggage, etc. The suspension system must deal completely with the varied types of surfaces ; the system which transmits the bumps and jars to the passenger will not be tolerated. To accomplish this over the road condi tions enumerated, flexibility and con siderable wheel movement are required. The mass of the body and its height of

e.g. logically make it roll on corners. That attempts to remove this deficiency are being made is apparent in the fitting of anti-roll bars, better shock-absorbers

and a vastly improved i.Ls. over that of the first to appear on American cars. But the car will never corner like an Alvis, say ; it was never designed for the same job. Of the brakes on American cars I take a rather poor attitude. Some of the things fitted to stop 3,500 lb. of machinery are appalling. I doubt if they would last two laps at Le Mans ! I have no idea whether they will ever come up to near-racing standards. Nevertheless, I do question whether, in a comparison between average ears of the respective countries, the American’s brakes are inferior. I can think of one or two that are not as good as they might be—they a re certainly inferior to those found on competitive products. Incidentally, I believe that considerable stock-car racing takes place in Australia. : perhaps (if

this is published and a knowledgeable A ustralian reads this !) they might have information about how the brakes of the American ears stand up to the job. The engine must be flexible—pull from 10 m.p.h. upwards in top without rough ness. This implies a large, woolly engine, and because it is so, the transmission is mare a device for moving off than any thing else. 1939 saw the fitting of hy draulic drive in conjunction with I he usual transmission, and from an initially optional unit, this has now become standard on several models of two companies—Chrysler and General Motors. In time, I believe this practice will become general, and to the average owner this is all to the good. Anything that is cal

culated to simplify driving is expected by the customer, and appreciated. If one maker doesn’t supply it, another will, and sell the better for it. Other than periodical oil changes, lubrication and tune-up, the car that requires a top overhaul before 25,000 miles, irrespective of driving, is falling short of expected standards. Boring

should not be required before 50,000 miles, and even at this mileage it is often only necessary to hone out a slight taper. Starting must be purely automatic and instant in all temperatures. The bodywork must be attractive ; and this implies that it is in keeping with

this so-called “streamlined “age, whether you who deplore American styles like it or not. Finally, and most important of all, the price must be such that, in keeping with our living standards, the average man can purchase and operate a new car. This implies a price range, in Canada, of about

I have read much of proposed automobile export from this country. The foregoing is what is expected by the general public and the standard of quality must advance regularly. Parts and service will have to compare favourably with existing set-ups for American makes. Either your manufacturers meet these standards or fail to do business. The American car does the job for which it is designed, and as sheer transport (its main objective) eclipses anything you produce. It is at a price such that one person in seven in Canada and one in five in the U.S. owns a car. 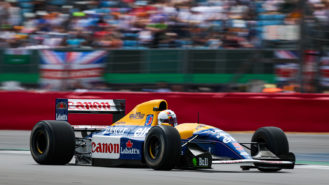