He may only have stood 5ft 4in tall in his cowboy boots, but few singers were as big on the country and western scene as the honey-voiced Marty Robbins. Best known for writing and recording El Paso – the first US No1 hit of the 1960s (No19 in the UK) – Robbins also became a dedicated stock car racer having taken up the sport even before the mellifluous ballad brought him worldwide fame.

In a 17-year competition career, Arizona-born Robbins made 35 starts and managed six top 10 finishes in the rough and tumble world of NASCAR. He was even awarded the Rookie of the Race title after clocking 188mph in the 1972 Winston 500 – or would have been, had he not admitted to running an illegally de-restricted carburettor. Afterwards, having accepted a $350 fine for cheating, he simply said, “I just wanted to see what it was like to run up front…”

But there was no monkey business in the 1970 National 500 at Charlotte where Robbins drove this Dodge that he had bought from double Winston Cup series winner James Hylton, who previously ran it in Charger guise. 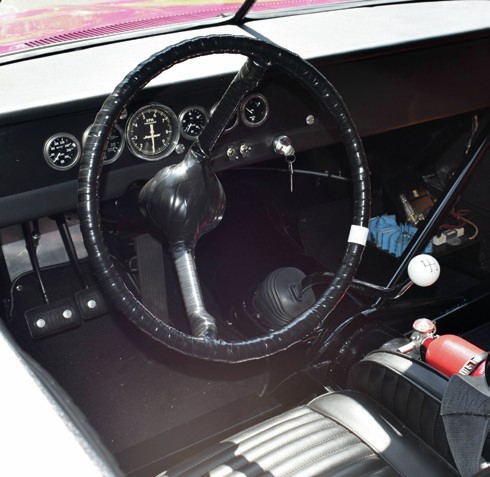 Robbins had the Dodge converted to Daytona specification by stock car gurus Bobby and Eddie Allison before campaigning it in the big race, which marked his first return to NASCAR after a two-year gap.

It subsequently disappeared from public view, only to be rediscovered in 2005 and meticulously restored by Ray Evernham’s Big Iron Garage in Mooresville, North Carolina – right down to Robbins’ signature magenta and chartreuse livery. It runs a 426 cubic inch racing hemi V8 in a bespoke Nichels chassis fitted with GM-based front suspension, which was one of the principal features that led to its identification as the ex-Robbins car.

Being sold with a bulging file of period photographs, race provenance and magazine articles, it is the second of the singersongwriter’s race cars to come to auction since 2016, the previous example being a heavily modified 1964 Plymouth Belvedere which famously carried no777.

Bonhams, Goodwood, July 9
Bonhams is back with its regular Festival of Speed auction, which this year includes a 1929 Maserati Tipo 26B grand prix car tipped to fetch £1m, and an Aston Martin DB5 drophead that not only belonged to Princess Margaret, but also to comedian Peter Sellers. There must be a joke in there somewhere…

● RM Sotheby’s, Silverstone, July 17 This one-lot sale marks the first time a Lewis Hamilton F1-winning McLaren has come to auction. And what better occasion to offer the 2010 MP4-25A than at this year’s UK race? Before bidding commences, it will be driven at Silverstone at speeds of up to 150mph. Careful now – it’s estimated at £3.5m-£5m.

● Artcurial, Monaco, July 19-20 This sale brings the return of Artcurial’s popular week-long run of auctions that spans cars, watches, jewellery and collectible handbags (a record for the latter recently set by Christie’s at £309,000). Most will be interested only in bagging a car or a watch.

● Bonhams, Carmel, US, August 13 Among the lots at Bonhams’ sale during the Pebble Beach concours will be a 33-foot Airstream caravan consigned by Hollywood star Tom Hanks, who used it as a refuge during the making of a dozen blockbusters, including Forrest Gump and Apollo 13. It’s expected to fetch up to £175,000 and will be sold alongside Hanks’ mighty Ford F-450 pick-up estimated at £50,000-£70,000.