William Wallace, Morrison shelters, Yehudi Menuhin, and UKIP. Such is the breadth of references Richard Williams brings to his Stirling Moss story, a difficult subject to tackle such a short time after the great man’s death and the outpouring of memories and articles about him.

Can there be anything new to say about the man who earned himself the title Mr Motor Racing? Let’s have a look.

First promising sign – it doesn’t begin with our hero’s birth. Instead Williams describes delivering to the Moss home in 2017 the last trophy ‘The Boy’ would ever win, presented in absentia at Pescara 60 years after his Vanwall victory there. Disappointingly Susie is occupied with Stirling at that moment and he has to hand the trophy to a nurse and walk away. It’s an emotional human detail that sets the tone.

From there, while the 500s come before the Vanwalls and Lotuses, this isn’t an obvious progression. Chapters don’t begin “By 1953 Moss was already…”; instead they dive into Ken Gregory, Stirling’s manager, or National Service – until 1960 every youth was required to spend two years in the Forces. As with Hawthorn and Collins, questions are asked about why these young men are enjoying themselves in races instead of fighting for their country, and Williams quotes some nasty newspaper headlines – all rich context.

Unusually for a biography it’s possible to dip in and out of this one thanks to these short single-subject chapters – 60 of them, hence the subtitle. There’s ‘The Mechanic’, about Alf Francis of course, and ‘The Drift’. Here he not only eloquently explains the difference between four-wheel drift and opposite lock but also the history of the technique, noting that while it’s often said to be Nuvolari who invented it, it was Giuseppe Farina, the first F1 champion, who refined it to an art. In his 1955 Book of Motor Sport Moss himself credits him with “the new look of modern race driving technique”.

Another chapter is called ‘Fangio’s Pills’, discussing the uppers that Fangio gave Moss, notably before that Mille Miglia. As Williams points out these were in relatively common use at the time for night pilots and night workers as well as Juan Manuel. (In my own student days we all knew people who used Benzedrine for that overnight revision panic). But surprisingly Williams does not mention that after celebrating his gruelling 1000-mile victory at Brescia, Moss jumped in a car and drove non-stop overnight to Stuttgart to present himself at Mercedes HQ, something he himself attributed to those ‘little pills’.

With his easy style Williams has an ability to place each of his subjects within the contemporary picture which makes the book extremely readable and more than simple history. A chapter on Moss at Le Mans doesn’t open with the ace’s first drive there but at the funeral of Pierre Levegh, neatly framing SM’s dislike of the French classic. That chapter is followed by one on ‘Mopeds and Minis’, about Stirling’s minimal motoring, while the Vanwall section is sandwiched by one on Katie, the first Mrs Moss, and another on Bonneville salt flats and his various record-setting runs.

This is why a book based around facts which many of its readers will already know intimately can give a fresh slant: mention of Moss’s involvement in the Grand Prix Drivers Association is wrapped in a chapter titled ‘Industrial Action’ which extends one way to the radical safety improvements of late years (including Stirling’s famous comment that racing without danger is like a meal without salt) and also back to the short-lived and broadly forgotten UPPI, the first drivers’ union which brought the boycott of the 1957 Race of Two Worlds at Monza.

Of the man himself Williams gives a good account. While only rarely putting himself in the story, he knew ‘The Boy’ reasonably well, enabling him to depict Stirling’s fondness for income – endorsing absolutely everything he was asked from oil to erectile aids – and for gadgets as his high-tech Mayfair home attests.

Then there’s his unmatched (for the time) awareness of the value of publicity, (that chapter is called ‘The Wave’), the invariable ‘yes’ to interviews, the presence on society pages. Less uplifting things appear in ‘Politically Incorrect’. “No-one in the future will use the term ‘crumpet’ to describe attractive women,” says Williams of one of Stirling’s catchphrases. Then there is the endorsement of UKIP (“A mistake”, he said later), offset by his dislike of the apartheid he saw in South Africa in 1959, advising fellow drivers in the East London race to wave only at the non-white spectator enclosures. If you didn’t know it already, reading this demonstrates that Moss was far from being a simple character.

Does the book contain unknown material or newly uncovered treasures? Perhaps not new (or if so I missed them) but widely drawn and tightly selected. Does it present a known story in a fresh and readable way? Certainly. It may not make you throw out all your other Moss books – this comes in traditional book format with few photos, on uncoated paper and slightly grey at that – but as a portrait of ‘the Boy’, it’s a fine offering. 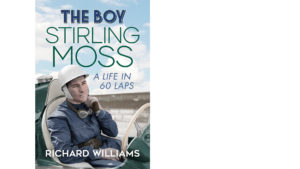 The Boy: Stirling Moss –A Life in 60 Laps