THE motor industry and the entire sporting motoring world lost a valued friend and benefactor when the Rt. Hon. Sir Charles Cheers Wakefield, Bt., Viscount Wakefield and Baron Wakefield of Hythe, passed away last month at the age of eighty-one. Lord Wakefield, like many other great men, lived simply and sincerely. He founded the famous concern of C. C. Wakefield and Co. Ltd., makers of “Castrol” lubricating oil—which has since then looked after the bearings and other internals of so many different types of engines—as long ago as 1899. From the success of “Castrol” he achieved his great prosperity, and he responded by giving vast sums away—not to the project which could raise the most publicity by the loudest blare of trumpets, but back to the pursuit which had given his wealth to him. Thus we find Lord Wakefield supporting Sir Alan Cobham, Amy Johnson, and others in their adventurous motoring in the sky, as well as founding the scholarships at the R.A.F. Cadet College and finding hundreds of pounds as prize money for the R.A.C.’s King’s Cup Races, and for the International Schneider Trophy seaplane contests. Criticism that all this was done with an advertising motive was nicely counteracted by Lord Wakefield’s backing of humble folk with doubtful projects because he liked them as individuals and by his habit of turning a deaf ear to others of greater and proven ability. In our world, apart from thousands of pounds donated to prize funds, Lord Wakefield financed Sir Henry Segrave’s absolute speed attempts at Daytona and his motor-boat speed records at Miami, and he put up the Wakefield Gold Trophy for speed and that prize of £1,000 a year to the current holder of the “Motor Car Speed Record.” Further, he presented the 232 m.p.h. Irving-Special “Golden Arrow” and the record-holding motor-boat “Miss England” to the nation. On the less adventurous side, he twice held the office of President of the Motor and Cycle Trades Benevolent Fund and donated to it the sum of £10,000. He gave away a lot more of his wealth publicly and made numbers of gifts of which we shall never hear.

He lived the life of a simple, shrewd man, following in many ways the standards of the Victorian age. He had no extravagant tastes and his personal transport was looked after by a far from new Rolls-Royce car.

Motoring sportsmen and followers of competition motoring owe a great debt of real gratitude to Lord Wakefield. We only wish that others who have made their fortunes out of motoring would be half as generous to that side of the game which improves the breed of the Industry’s products and does so much to keep the wheels turning. Lord Wakefield did more than his fair share in that direction. Perhaps the best way in which we can show our gratitude would be by contributing something to the Royal Air Force Benevolent Fund, which exists to look after the airmen Charles Cheers Wakefield so greatly admired, and on behalf of which he appealed only a few months before his death.

Who better than he could appreciate the wonderful feats of those “lords of the air” for whom he worked so hard, and who, although they may not all be cognisant of the fact, owe so much to his ability and the encouragement he gave to research and experiment in every modern development of the internal combustion engine.

Where can we look for another to take his place? Let us hope that the good work so freely assisted by Lord Wakefield will not be allowed to languish for want of a patron. 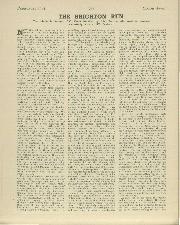