[Some readers think that we devote too much space to old cars. Many have requested articles on the M.G., which is the most widely-used modern small sports car. Consequently, we have pleasure in publishing this article by Pte. Pat Stilley, on his 1933 K2-type M.G. Magnette, a somewhat rare version of the Abingdon marque.—Ed.]

THE majority of the readers of MOTOR SPORT will, I am sure, be quite familiar with the famous K3 M.G. Magnettes which astounded drivers of Continental cars with their speed and reliability. But I am pretty certain that there is not a great number of people who have had any practical experience with the K2-type unsupercharged version, a small number of which were built in 1932 and 1933, mostly to special order. My father had the first car of this type in Nottinghamshire, in May, 1933; as far as actual hard figures go its performance was disappointing, to say the least. But it had that certain individualistic charm about it that one can only find in a handproduced vehicle, backed by racing experience. At this time (1933) I was away at school and only came in contact with the motor during my vacations. I was not allowed by law to drive the car on the public highway, although I must admit that I did so on several occasions. As I have previously said, the performance was disappointing ; so much so that my father had the car laid up for the majority of the year and only used it during the summer. The rest of the time he spent driving an Alvis Speed Twenty. In 1937, after I had left school, he presented the M.G. to me. Although the speedometer read only 25,000 miles, I am afraid that the car was in a rather bad state, both mechanically and bodily ; so much so that a complete and thorough overhaul was indicated. This was carried out over the months of December, 1937, and January and February, 1938. The following was the work carried out :

First, the car was completely stripped, i.e. engine, gearbox (E.N.V.), body, wheels, brake system and back axle were removed, just leaving a bare frame with front axle and steering layout. We commenced work on the engine first. It was rebored, 100 thou. being taken off the bores to increase the capacity as much as possible. New big ends and three new little ends were fitted, oversize Wellworthy Pistons and rings replaced the original Aerolite pistons with Wellworthy rings. One of the inlet valves was found to be bent, so a new one was fitted, likewise a new guide for the valve. The crankshaft and main bearings were examined for wear and found to be perfect (so we thought at the time !) ; two bearings of the camshaft were replaced. The cylinder head had three-sixteenths machined off it and the combustion spaces burnished. The next thing that we dealt with was the three S.U. carburetters. These were all stripped down and synchronised. The engine was then run on the test bench for 12 hours at approximately 1,500 r.p.m. to take away the initial stiffness and to let things bed down. A new set of KLG 583 plugs was also fitted. The chassis was found to be in excellent order, so we merely scraped and repainted it ; the differential VMS also examined and found to be in perfect order. The

Wilson E.N.V. gearbox as pulled to pieces and put together again, (A job I do not wish ever to have to repeat 1) The brakes were relined ; incidentally, these brakes were the finest of their kind I have ever seen on a small sports car, with Elektron 15 heavily ribbed drums and having cast-iron hardened steel liners.

The coachwork was the next step ; it was all completely re-cellulosed the original colour scheme (black with Dublin green wings), the dashboard was french polished, all the plated parts were replated and new hinge pins fitted to each door. Finally, a new hood and tonneau cover were fitted. The leather upholstery did not need any attention whatsoever. The whole car was then reassembled, taxed, insured and put on the road. I expected to find that the original back-axle ratio of 5.78 to 1 (low, I know, but necessary to allow the 1,087-c.c. engine to deal with the weight of the car—approximately 20 cwt.) would, give reasonably useful acceleration, with a maximum speed in the region of 7276 m.p.h. During the initial running-in period, despite very careful handling, I had a piston ring go after 600 miles had been covered ; this, of course, necessitated the engine coming down again, but the running-in was completed without further mishap. After 2,000 miles had been covered and the engine was beginning to stand up to sustained high revving, trouble reared its head again ! The dynamo, apparently owing to undue vibration, burnt out five armatures in rapid succession ; after the fifth a completely new shaft and armature were fitted and the trouble never recurred.

On the road the car was a delight to handle owing to its superb road-holding, steering and braking, but I am afraid that the performance figures are somewhat disappointing. These were the best that I managed to secure :—Timed maximum speed over the flying quarter with Discol petrol, 75.32 m.p.h.; maximum in third gear, 55.02 m.p.h. ; maximum in second gear, 32.00 m.p.h. First gear I considered far too low. The maximum in this gear was approximately 18 m.p.h.

The acceleration was not outstanding either. The following are the best figures I was able to secure, car open, windscreen folded flat and two up in each case :— 0-30 m.p.h., 9 sees.; 0-50, 19i sees. ; 0-60, 26 secs. At 32 m.p.h. in second gear the engine did 6,200 r.p.m. ; at 55 in third, 5,600 r.p.m. ; and at 76 in top, 5,600 r.p.m. ; the latter being the highest ever reached in top gear, although the engine ran quite happily up to over 6,000 in the intermediates. Petrol consumption worked out at approximately 23-25 m.p.g., which I considered was not too bad considering the high r.p.m. of the engine and the fact that there were three carburetters. Oil consumption was in the neighbourhood of 2,000 miles to the gallon. I always considered it a great pity that a larger engine of, say, 2-litres capacity was not developed for this chassis, utilising higher gear ratios. I am sure a really

outstanding car would have been the result. Of course, the supercharged version was an entirely different proposition and really had a simply wonderful performance ; the engine on the K-type was expressly designed for supercharging, with a boost of about 12 to 14 lb./sq. in. The later N-type, which appeared in 1934, was much lighter (16 cwt.), had a narrower track (3′ 9′) and an engine with a slightly longer stroke, giving a total swept volume of 1,287 c.c. This model put up quite creditable figures, but I can assure you, after having driven one, it had not the road-holding qualities of the K-type, nor the finish—of course, there was over 2100 difference in the price, which no doubt accounted for a lot. The E.N.V. gearbox gave very rapid gear-changing, but I am afraid that I am a die-hard enthusiast and much prefer the crash-type gearbox. Unfortunately I experienced quite a bit of trouble with -slipping bands, a trouble which very nearly completely spoilt a holiday trip to Bournemouth After 12,000 miles had been covered the shaft-drive to the B.T.H. magneto, with which the engine was fitted, began to wear and oil was being flung about all over the engine and also through the bonnet louvres. On top of this I discovered ominous pools of oil underneath the engine whenever I stopped anywhere —apparently the back main bearing was wearing badly. I had to have this replaced when the oil consumption dropped to 200 miles to the gallon I In the winter of 1938-39 I experienced an awful lot of starting difficulties. I can vividly remember one special occasion when six very hefty friends of mine had to push her downhill to start—she wouldn’t

even freewheel I think that the oil in the engine and gearbox had just about solidified ! I had brand-new batteries in, but the starter just grunted. In February, 1939, during a heavy rainstorm, I had a high-speed crash with a 15-cwt. Ford V8 van carrying milk of all things. I think all the cats in the district had a gift from the gods. The Ford was a complete “write off,” and unfortunately the Magnette sustained severe damage as well, although I never got a scratch. It cost 238 18s. Od.. to put the car on the road again, and afterwards she never felt the same. I sold her in March, 1939, just prior to having my present ” T.A.” 1939 M.G. Midget, which, incidentally, does not do 96 m.p.h. and does not cruise al 90. The very last I heard of M.G. Magnette AAL 165 was just before the war, and then she was in the Cardiff district of Wales. I wonder if she is still running ? If the present owner should happen to read this article perhaps he would care to get in touch with me and tell me how the motor is going. But wherever she is here’s a toast to her, and may she never give her present ou ner as much trouble as she gave me ! 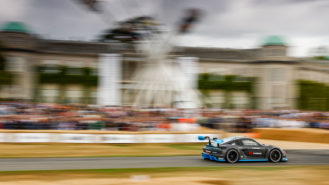