Controversial views held by readers of MOTOR SPORT have been (and are being) expressed in these columns, issue by issue. The results of much thought have been put forward in respect of the design of the fast car best suited to meet the postwar era. Very right, very proper, very interesting. But I am as appalled as I am astonished at the conservatism of the views expounded. Your able (and sometimes highly accomplished) contributors give little indication of original thought, but merely analyse existing sports and racing cars, pluck from each what is thought to be its brightest feature, and combine all the high lights into one glittering ensemble. If one is disposed to be magnanimous about it, then one must agree that this method conforms to the accer ted means of evolving the best, be it motor-car or golf club. What does confound me, however, is the realisation_ that none of your contributors have yet appreciated

the means by which the greatest single advancement can be achieved.

I refer to the “five-in-line” engine. It is nothing other than conventional thought and conservatism which has resulted in the persistence of the even numbers ; hence the 4, ‘6 and 8 in-line, all of which are accepted with complacency.

The five-in-line is excellently suited to all classes from 1 to 4i-litre capacity, above which volume the seven-in-line offers similar advantage, and will ensure that the weight of the reciprocating parts is kept to a minimum. Consider the benefit obtained by such an arrangement. No two pistons are on t.d.c. at the same time, giving an excellent kinetic constancy. The crankshaft characteristics are Of a high order, for reasons other than the fundamental necessity of carrying the shaft in six bearings. Six hearings! I suspect that this peculiarity will be seized upon by the obturately-minded as being sufficient reason for condemnation on the Count of manufacturing difficulties and their effect upon cost. Which, to quote Euclid, is absurd. It must be admitted thalk the cost of manufacture will be more than that of a three-bearing four-cylinder engine, but the additional charge can he kept within reasonable bounds, and the combined effect of smooth torque and excellent balance will result in low maintenance expense. The proof of the pudding is in the eating. A review of engine design much in vogue amongst purveyors of heavy transport will indicate that they have sampled the recipe, and found it good. The five-in-line heavy duty compressionignition engine functions very well under

severe conditions, whereas the fouror six-in-line of the same capacity is a rough motor of” lumpy ” torque. The analogy between such engines and those designed for sports and racing cars is by no means so absurd as might appear. In fact, the faults inherent in the fourand six-in-line manifest themselves in the heavy duty engine when subject to the particular conditions appropriate to their environment; the same faults are latent in the sports or racing engine, but are less evident in consequence of the differences in design and operational usage.

The moderately-priced sports car envisaged as meeting a post-war need is provided with a five-in-line of approximately 2-litre capacity, with wet linered block and single o.h.c. operating two valves per cylinder, with low pressure supercharge. Basically the same engine is intended to satisfy those who require higher performance (and are in a position to pay for it) in which event is included a modified head embracing a twin o.h.c. valve actuation, together with higher boost.

Time does not permit a fuller exposition of the remaining features of the chassis, but let it be said that it is not proposed to fit the engine at one end of the chassis and drive the road wheels most remotely situated, a method which is further proof of our being slaves to convention. When opportunity allows I hope to expound more fully on the contemplated venture, which aims at providing a high-grade sports car at a reasonable price, and fitted with such an engine as described. Anyone interested ? I am, Yours, etc., 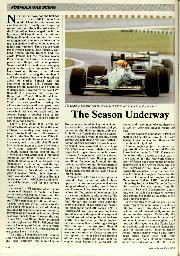 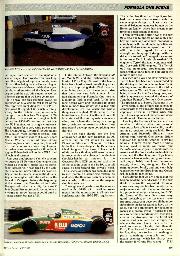 May 1990 Issue
By Denis Jenkinson 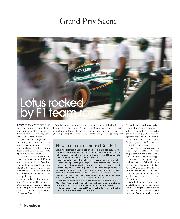 Lotus will in effect utilise the drivetrain of the 2009 Red Bull RB5 on next year’s car. Having already agreed to use Renault engines, Lotus has opted to source its… 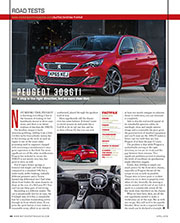 A step in the right direction, but no more than that Not before time, Peugeot is throwing everything it has at the business of making its fast hatchbacks decent to… 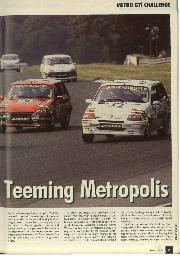 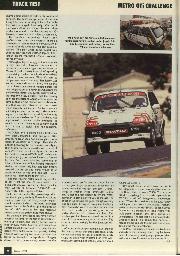 Into the tight right-hander at Lodge Corner. There's room for a Rover Metro and a couple of inches of daylight down the inside. Wait for his brake lights to come…