WE have received two newsletters from Melbourne, Victoria, N.S.W., one from Earl Davey-Milne. and one from Ken Smyth. These two letters rather overlap, but we have summarised their contents below. Duckett’s T18-litre G.P. Mercedes is referred to, the corrected engine dimensions of which are 6k-in. by 7k-in.’ bore and stroke. The year of the car is still in !Joubt, but is believed to be 1909; another smaller “60 ” G.P. Mercedes went to Egypt ai an arnied car in the last war, but is thought to have been broken up. Another Matter to be corrected is that Duckett’s Anzani-engined Bugatti has a straight-eight ‘ 2-litre chassis, not that of a Type 37. Davey-Milne’s own ” special ” comprises a Type ’37 Bugatti with a 1936 Hudson engine installed., The original engine, as with Duckett’s car, had blown up and a Willys 77 engine was installed, replaced by the Hudson. This engine was -decently mounted ill the chassis and a new facia of light, welded tubes was made up. The Bugatti handbrake had to go back. about 6 in. The propeller shaft incorporates two Hardy Spicer universals. On a 3.8 to 1 axle ratio the car is claimed to have done a s.s. i-mile in 17 secs., and to have reached 105 m.p.h., before rebuilding was undertaken. The car now weighs 15 to 16 cwt., and Davey-Milne hopes to put in a higher axle ratio and a radiator with a 6-in, core; after the war. His other cars consist of a .” 40/50″ Rolls-Royce coupe, a 1931 Wolseley Hornet coupe, a Hillman .Minx saloon, and the ex-Peter Williams duck’s-back ” 12/50 ” Alvis. Williams has acquired a’ 30798″ Vauxhall, while the Type 37 Bugatti illustrated in our issue of July, 1943, belongs to Leo Hoare, and has a Type 40 block and s.u. downdraught carburetter. It does 82 m.p.h., and may be given four separate exhaust pipes and outside exhaust in the near future. Another special Bugatti belongs to Jack Day, comprising a single-seater on a Monza chassis, with VS Mercury engine arid Wilson gearbox, braking now being by 15-in, hydraulic stoppers. • Of Ford specials Bill Sinclair’s has achieved 104 m.p.h. It has a Winfield camshaft and c.arburetter and Scintilla magneto. .Other V8 jobs include Stan Dentler’s Frazer-Nash-chaSsised car, and McDonald’s’ Alta-:chassised car, the latter said to do 115 .m.p.h. and a H.S. i-mile in 16.8 secs. Jim Gullen hassold his blown V8-motored Ballot and is building another special, comprising. a 2-litre Ballot chassis, much altered, which rumour says is to receive an Oldsmobile motor. Clarrie Head; Ken Wylie and Smyth have 4cylinder model A Ford-engined midget cars. Head’s uses a Winfield camshaft and carburetter, special head, valves,

guides and pressure-feed oiling, and is said to give 98 b.h.p. at 4,000 r.p.m.—the Americans get 148 b.h.p. at 5,500 r.p.m. from specialised midget engines. Wylie’s car is similar but with locally-made camshaft and Bosch magneto, and Smyth’s is a cross, between these two. Smyth says a good word for these midgets, realising we usually sneer at them over here—says they cost about £80 to build, and average about 18 secs. for the s.s.

i-mile, and have done 124 They have a wheelbase of 5 ft. 10 in. ‘to 6 ft. 4 in., and a track of 3 ft. 4 in. to 4 ft.Other cars of this type are .Frank 141etcher’s Austin Seven, the Beasley bwithers’ Willys-engined cars, Eddie . Thomas’s Plymouth Four, Edgerton’s Americanchassised Continental and Bail’s 60-h.p. V8 job. Turning to normal sports ears, Wylie is rebuilding a 1935 “works ” Riley Nine, McLaren has a P-type M.G., and Edgerton a T-M.G., Roots-blown. Then Morrie Monk has loads of G.N. bits, and builds them lip like Meccano, his favourite device being a 11.9 Morrisengined job. The Head family own amongst them a Riley “Gamecock,” a Riley “Imp,” a Willys, an Austin Seven, an Austin Ten, a Riley ” Kestrel ” and a Wolseley. There are also two Austin Seven specials, one of which has a lengthened chassis, twin downdraught Zenith carburetters, standard camshaft and special cam followers, giving 6,500 r.p.m. 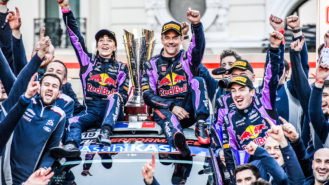