Mixed results at the year-end auctions in the UK and America suggest that the novelty might be wearing off when it comes to online sales, but continued uncertainty surrounding the future of large public gatherings, local lockdowns and tier restrictions means the houses face something of a logistical conundrum when it comes to planning events during the first quarter of 2021.

Following the reasonable success of its second Geared Online sale in late October, Gooding & Co will continue with the internet-only format for its Scottsdale auction, which will be open for bidding from January 18-22, with a major item already consigned in the form of a Ferrari 275GTB Long Nose. Meanwhile, the first significant sale in Europe will be Artcurial’s newly-named La Parisienne auction on February 5 that will be held “in partnership with Rétromobile” – despite the fact that Rétromobile itself has been postponed until June.

But while uncertainty reigns, one thing seems clear: good cars that are reasonably estimated and consigned by open-minded vendors who don’t set their expectations too high continue to sell well – but anyone clinging on to hopes of recouping prices laid out on popular models when the market was on fire two or three years ago will, inevitably, be left wanting. And that’s regardless of whether bidders are in the room or online.

Not long ago £2200 would have been the sort of money commanded by the average Peugeot 205 GTi but the model has since become a landmark classic and prices have soared, even for ropey examples. There was nothing ropey about this one, however, despite having covered 93,000 miles. Meticulously maintained, finished in one of the best colour schemes and devoid of the power-sapping catalytic converter from new, it was made more desirable by being the actual car on which Corgi Vanguards based its scale model. It had also appeared on BBC’s Top Gear. 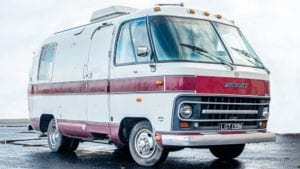 This example of Americana would make the perfect vehicle for attending historic events. Built using the same aviation-style techniques used in Airstream caravans, the Argosy carried all original fittings, including a fridge, hob and lavatory. 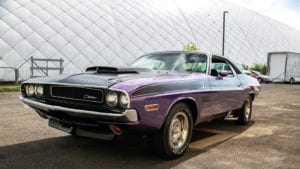 American muscle cars are once again heading towards being affordable and there are few better than the Challenger. This well-restored car, in its factory colour scheme of Plum Crazy, still had its original V8 with ‘six pack’ carburettor set-up. 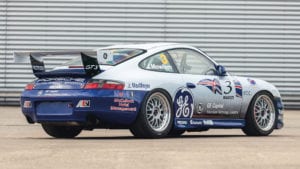 This was one of 61 GT3s for use in the Porsche Supercup, the supporting race series for F1. It was supplied by Porsche GB to Johnny Mowlem, racing in the Parabolica McCulloch Motorsport livery it wears today. Turnkey condition. 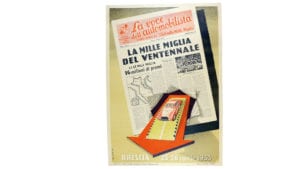 As in every year of the original Mille Miglia, hundreds of posters would have been
pasted up to advertise the 1953 event but only a tiny number survived. This was one such rarity which had been preserved in superb condition and promoted the 20th running of the event, which was won by Giannino Marzotto and navigator Marco Crosara in a Vignale-bodied Ferrari 340 MM Spyder. 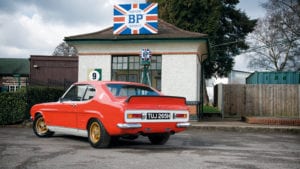 Believed to have been one of three development prototypes, the Cologne-built homologation special was rediscovered in a poor state a decade ago, after which it was restored to its original condition. Best of all is that groovy paint scheme.