There’s always some scepticism when a new racing category is launched, and few have created such a stir as LMP3. Announced in 2014 and born in 2015, the Automobile Club de l’Ouest’s concept added an extra rung on the career ladder towards LMP1. Well, technically it replaced the ailing Formula Le Mans (or LMPC).

But there were more than a few drawbacks with the original LMP3 plan – perhaps the biggest being that the class, which was designed as a feeder to Le Mans, was never actually designed to race at Le Mans, not even in a supporting role. Odd.

Regardless, fast-forward six years and LMP3 has truly proven itself a worthy formula, and arguably the car that made it into the success it is now is the Ligier JS P3.

Was it the first LMP3 design of note? Nope. That was the Ginetta. Was it the most successful? Absolutely. Across its five years of homologated competition, Ligier produced over 100, racing everywhere from America to Europe to Asia. Of the 132 official races it was entered for, Ligiers won 103 of them – largely because JS P3s tended to monopolise the entry lists, but also because during this first generation it was simply better than anything else.

It is produced by Onroak Automotive, the company which took over the rights to the Ligier brand after Guy Ligier’s retirement. But this was also the final car Guy himself oversaw prior to his death shortly after its launch.

Ligier was one of six manufacturers approved to create an LMP3 car for 2015. The chassis was a carbon-fibre monocoque with steel rollcage and with carbon composite bodywork designed to look like a baby closed-cockpit P1 racer. Into that slotted a 420bhp five-litre Nissan V8 engine (pulled from the firm’s pick-up truck range and then tuned by ORECA) and an Xtrac six-speed sequential gearbox. The final package weighed just 930kg.

While LMP3 kicked off at Silverstone’s ELMS season opener in April ’15 – with the P3 field made up exclusively of Ginettas after the British brand worked miracles to build the car in time – Ligier was in less of a rush. The JS P3 went through an intensive CFD programme to hone its shape, making it a monster in the corners.

It was launched at Le Mans in July and made its debut belatedly in the 2015 ELMS finale at Estoril, the Graff-run car finishing runner-up first time out. That set the tone and, come 2016, Ligiers dominated the entry – 18 of them lining up to start the season at Silverstone. From then on, if you wanted to win LMP3, you needed a Ligier. The success of the class even prompted the ACO to launch the Road to Le Mans race in 2016, finally allowing P3s to run at La Sarthe.

And even when the ACO revised the P3 rules for a ‘Gen2’ upgrade – equipping the cars with reworked aero, upgraded safety, traction control and an extra 50bhp – Ligier still dominated the entry lists. 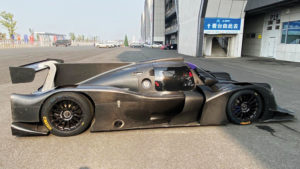 With just 4350 miles of use, this was a spare car and is currently in storage in China. Delivery is an option.
£101,000
racemarket.net