AA 11.:1 t_ I CAN automobiles do not usually appeal to the enthusiast, last we (-onside]. that the Cord is an exception, for its speeification, embracing )78 a-,7:10-ess engine, front-drive, indepen

dent front sosi:s•nsion by transverse leaf spring, etweealed radiator and headlamps, and 4-spec(1 electric-suction gearbox, renders it of more than passing interest. We stilt Consider that it will not endear itself to all the categories of enthusiast who read MuToil SPORT, but we do feel that it merits consideration amongst, those who have decided that after the war they Will derive the maximum of motoring satisfaction from a car of high performance and soinewhat futuristic design. ‘File Cord has the merit Of being a proven type, which is more than will be true of any fresh designs of siaseialised type which may greet the armistice. Consequently, we approached Mr. t )sear Moore, of Purkess, Ltd., who deal in secondhand Cords, and asked him why he chose to represent such a large li.p. car in this heavily taxed isle. His eminneists appear hereafter : although we invited !dm virtually to a free advertisernent, you will see that, very fairly, he discusses the cons as well as the pros. • • • What’s so fascinating alanit these Cords, anyWay ? You feel that a reply such as The car feels just right ; you know what I mean ” is hardly adequate. The questioner expects something more definite. And it is so hard to analyse the good points because, taken one by one, they do not amount to much more than most big ears have got. It is the knitted whole that counts. But the Cord ha 5 got some things most others haven’t LOI First, a big V8 engine of 4,730 e.e. and 39.’2 turning eomparatively It will run up to over 4,000 r.p.m.—-ove:. 3,500 when supercharged—and gives vivid acceleration on the second and third ratios of 5.85 and 3.88 to 1, but its great charm is the way in which it moves the car at GO m.p.h. at 2,000 r.p.m. in complete mechanical silence on a whiff of throttle. This is achieved on a 2.75 to 1

top gear and, believe it or not, it is pOsil le on this same ratio to come down to a walking pace and accelerate away witItouut slipping the clutch, with no signs of distress. (This is not recommended, and is merely a stunt to -show how Ilexilsle the engine is.) It is preferable to make use of the aceeleration available on the lower gears, particularl?s second. This gear can be normally used for starting away on I he level, and the car will ga up to over 50 in it quite comfortably if desired : which just about leaves everything else behind. Secondly, front-wheel-drive. The writer thinks that f.w.d. is right and believes that this is also the opinion of matly expert designers. Only conservatism and cost have stood in the way or its universal adoption. stranc,er drivingthe car in N normal mummer would not realise that it had Lwal.. but if real ” slicing ”i is to be indulged n, a slightly different technique should be adopted on corners. It is simply a matter of pushing the throttle open in the turn and then the engine will pull the car round. ‘Where a strange corner is inadvertt‘ittly entered at much too high a sliced it is possible to get i he impression that t he car is front heavy, but use of the acceleratnr always gets it round, and quite incredible things ean done on corners once you have gi t. used to it. F.W.D. is definitely better on ice, too. car’s good cornering properties are assisted by the wide track and. low seating. taisition rendered possible

by the 11.)5ence (if a propeller shaft. The springing is not at all normal American-much harder, with absence of roll, but gives It niee ride all. the same. ‘The steering and road-holding are good-very good. On a switchhaek road (such as between Basingstoke and Wilicliester), where speed in the high top gear can be raised above normal on the down slopes. it is possible to get. a speedometer rending or about 150, and still be perfectly happy Nvit It both. It is felt that the braking; could be

irsip-roved by using Ia rger drums. With the existing brakes careful inaintenanee is needed if the stoprins. power is to be kept sufficient to cope it is really high speeds. On the other hand, all anchors can be thniwn out at any speed you like and the car NV 11.1 pull up in a st might line. We come now to the third way in which the Cord is (lifferent : the manner of gear-changing. This is done by an electriescum-vacuum system. The gear is selected electrically, and the actual change is made by a vacuum cylinder. There is a small ehange-speed gate on the steeringcolumn just helow the wheel and the lever of this is manipulated in the same way as the usual ehange-speed lever, with the difference that. the actual (leinge of speed will not take place unless the chitch is depressed. Intelligeld preselection is all right, but the makers do not advise it because, possibly, they fear some sub-human wen will attempt to come, down to second at 90, Nviiich might result

in expensive noises, as t vt101111 illis quite powerful enough to pitH the gear in. It one wishes to slontsle de-clutch this is feasible, and helps the synchromesh as it does on most lae“,s.

Is all this reliable ? ‘Yes, it’s pretty good. The only 1 rouble that has been experienced has been due to dirty contacts Ii) the switches. and these are not difficult to clear), nor is it frequently necessary.

The instrument hoard is most satisfying. It contains rev.-counter, electric clock, vatcr thermometer and radio-timing dial, in addition to the usual stuff, and these are arranged in a maehine-turned, stainless-steel panel with concealed lighting. It has none of the pressed-tin effect usual in transatlant ic ears, and is very beautiful in the day : at night it invariald:v calls forth exclamations of wonder. The builtin radio is a good one—if you like that sort or thing. Nov, what about the snags ? Oh, yes, the Cord has snags, which arc all the more irritating because it is so nearly perfect. The chief one is the lack of automatic

lubrication for the outer universal joints. This must. be done by hand with a grease gun. It is not difficult, but has to be done pretty often, say, every 2,000 miles in winter and less often in summer and, if neglected, play develops which makes

the joints noisy on the hick. The front hub nuts and Owe] nuts must be kept very tight indeed, or the hub races will ,ro and the wheel centres crack if fast cornering is indulged in. The engine is 100 per cent. reliable. Trouble is unknown, and an _kinetic:in correspondent working in a Boston service station speaks of mileages of’ over 200,000 without a rebore.

By the way, there is a persistent idea that the Cord Company is defunct. This is not so : spare parts are obtainable, and they plan to produce a new model after the war.

To sum up, it is not everybody’s car. The cost of’ running such a large car would make it impossible for many, though the petrol consumption (14/16 m.p.g..) and the reliability and slowwearing make it much cheaper than most Ii igh-performance motors.

But the fact remains that to handle a Cord is a unique experienee in motoring, The Most critical enthusiast with many years of experience, including all flit” interesting ” makes, never fails to enthuse over the Cord, and those interested in fast motors should certainly make a point or trying one once at least. • • • We, ourselves, were able to take a N,ery brief ran in Air. Aloore’s own 19::a Cord saloon, trak-eiling live up. The ii;iy was Iuj telly cold, and the engine refused to warm up, but this did not prevent the car from holding 2,8(K) r.p.m. in top gear along the tleserted %Vat ford I:y-Pass. During -this performance the suiccdometer indicated 105 m.p.h., on tt 2.73 to i ratio, with 16 in. by G in. tyres ; you can do the ant Ii lactic for yoarselves. car els vises effialles,dy at 70 or 80 m.p.h. at engine speeds that are reassuringly moderate. The riding is extremely interesting, being quite ste:aly yet ery comfortable, with a characterist coruer-to-eorner dipping motion ; only stunt ” deviations from the straight resulted in roll. The whole car is truly amazingly quiet. indeed, one of the ino;1 silent we have driven, and in view of the f. val. that was esiaa-ially interesting. Wind noise Was noticeably subdued. The breast, quite chise-set, eloth-upladstered I anti t seats, front and back. were very esuisnatable and stan p an unusually pleasing note in an American emr. The engine hehayes as if it were invisible, and when idling is literally all but inaudible. ‘Flue sacering is excel’. tion:dly light, low-geared and with no conic-back motif in, and the wheel, if’ or rather conservative diameter, is very sensitsl placed. The tiny gear-lever is easy to use, fait we did not have an opportunity a hccoming accustomed to it in the short distal-0T Over which we took the controls-the loTg pedal movement of the clutch, the need to tread heavily and all the way down on the brake pedal (the hydraulic reservoir was due for some more fluid), and the umbrellahandle hand-brake needed getting more accustomed to, before we should have felt quite happy conducting a Cord at high speeds—but, then, we have spent the last three years driving mostly vintage motor-cars. ‘The forward vision is good, but would be better still if the central division of the slightly-V screen were dispensed with ; the panels open when re wired. The stainless-steel facia is pleasing, but it took us some time to distinguish between the various dials, as the four major ones are all of identical size. The concealed headlamps wind out of the wings effectively, being controlled by separate, quite sizable, handles, one each side of the instrument board. The exterior appearance of the Cord is very compact and well-balanced and should especially ukase folk who concur with service flats and films by II. G. Wells. Our necessarily very limited experience of the Cord was rendered more pleasurable by the presence of an American soldier who has two of his own back in the States —and who swears by them. The car tried was a Beverley sedan, on the 10 ft. 5 in. chassis, which cost £925 new ; an 11 ft. Chassis was also made. Supercharged models were available for £100

more than the normally-aspirated jobs, and we hope shortly to test one of these cars recently supplied by Mr. Moore to a client. The condition of the car we tried was an admirable testimony to the longwearing qualities of Cords and, on the subject of their popularity, we were surprised to hear that some 700-800 were believed to have been sold in this country during the three or four years preceding the war. Those interested in this sort of motoring should not fin! to contact Purkess, Ltd., 18, Carlton Road East, Wembley, Middlesex (Arnold 1962) and discuss this very modern car. It should be the post-war answer to a lot of people. 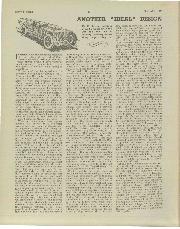 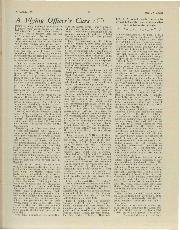