After going fastest in FP2 in Miami in his Mercedes, George Russell, below, was puzzled. “I don’t understand why we have hit the ground running here. We knew coming into this weekend, with the higher temperatures, it would help us a bit with tyre warm-up. This is the first really hot race. The car seems to be working well but it’s only Friday and we’re not getting too carried away.”

Lewis Hamilton was also relatively quick, but even more perplexed. “It feels similar to me, to be honest. We definitely still have a balance issue. We haven’t cured it. But looking at the times it seems we have improved, so I’m not quite sure where that is. I’m still struggling with the car.” 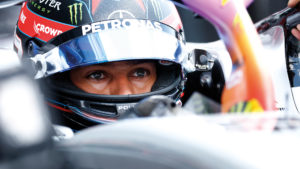 But the porpoising problem was much reduced – just as it was for every car. On a track which didn’t seem to induce the phenomenon, Mercedes was suddenly competitive again – or so it seemed.

Into Saturday the car was as far off as ever – and the porpoising was back with a vengeance. The ride height had been lowered for FP3 and the car was nowhere. Friday settings were restored for qualifying and still it was over 0.8sec off the pace. It seemed that the car’s problems returned along with the increase in track grip.

Friday had proved to be a false dawn. “It was a completely different beast today,” said Russell after failing to graduate from Q2. “The rear of the car is hopping around and you just don’t have any support or stability in the rear. Yesterday we were flying through sector one and I had so much confidence in the car… We don’t really understand why it feels different.”

McLaren is aiming to win the Formula E championship in its first season, after taking over the Mercedes team and securing a Nissan powertrain. Unveiling its debut car that will…