You can spin the story of this car in two quite different ways. The easily pleased will point to the fact that here is an ‘M-performance’ 2 Series with near enough the same pace as the previous pure ‘M’ M2. They’ll point out also it is now alone in its sector in offering a proper six-cylinder powertrain and, more, that while there is now no choice but to have four-wheel drive, almost all of that power is directed almost all of the time to the rear wheels alone.

By contrast the cynics among us will point out that even if it’s not used very often, four-wheel drive still carries a weight penalty. They’ll point out too that manual gears are
no longer available and that the automatic transmission is of the torque converter rather than the double clutch variety. They’ll say that the additional performance which appears to make it a match for an old M2 is a smoke and mirrors job, speaking more of all-wheel drive traction than real potential. And to prove this point they’ll point out that such is the increase in weight brought by its bigger body, automatic gears and all-wheel drive that despite a rise in engine output its power to weight ratio actually fails to improve on that of the old, manual rear-drive M240i.

The truth, if mere opinion can ever be expressed as such, lies somewhere between these poles. Inclined towards what I hope is a reasonably healthy instinctive cynicism, when I first drove the M240i, I was warming myself by the fire, firmly ensconced in the latter camp. For the M240i is a good, but far from great driver’s car.

As expected, the engine provides its greatest strength. With now no fewer than 369bhp coming from the 3-litre straight-six motor it is not only powerful, it is also essentially free of turbo lag, BMW having mastered this art at this level better than anyone else. The car really does feel very quick, although I’d like to hear a bit more engine: if I had six cylinders when no one else did, I’d want to make a noise about it.

The auto box is good too, mostly. The shifts are very smooth and if you call up Sport mode (or, better, go into Individual where you can configure the maps for the engine, transmission, steering and suspension as you choose, and select Sport for the powertrain options but leave the chassis settings in Comfort), the shift speeds are quick enough, though not as rapid as double clutch. And yes, of course I’d still rather have a gear stick.

I have greater reservations about the way the M240i handles. The good news is that over the limit with all systems off it reveals a lively side to its character that you hitherto might not have imagined was there. It appears to understand what you’re trying to achieve and will channel enough torque rearward to unseat the Michelin Pilot 4S tyres and allow an interesting amount of oversteer to develop. The bad news is that, out there in the real world beyond Top Gear, no one actually drives cars like this, like that.

The rest of the time it feels just a bit am-dram: it knows all the lines, tries really hard, but ultimately doesn’t quite have the talent to truly convince. It feels its weight even though it’s slightly lighter than I imagined given all its hardware, and steers with reasonable precision, but not that scalpel-sharp authority one might hope. The ride is also questionable: it comes with a certain lumpiness in Sport mode which can be removed by selecting Comfort but only at the price of some float on undulating roads. It’s preferable, but still not ideal.

But then you start to rationalise what you’re doing, and focus on other areas. Like the attractive, effective and comprehensively equipped interior; the vault-solid build quality; the fact that while there’s not much room in the back, the rear seats could be used for small children unlike the purely vestigial items in, say, an Audi TT. And, of course, the fact it exists. 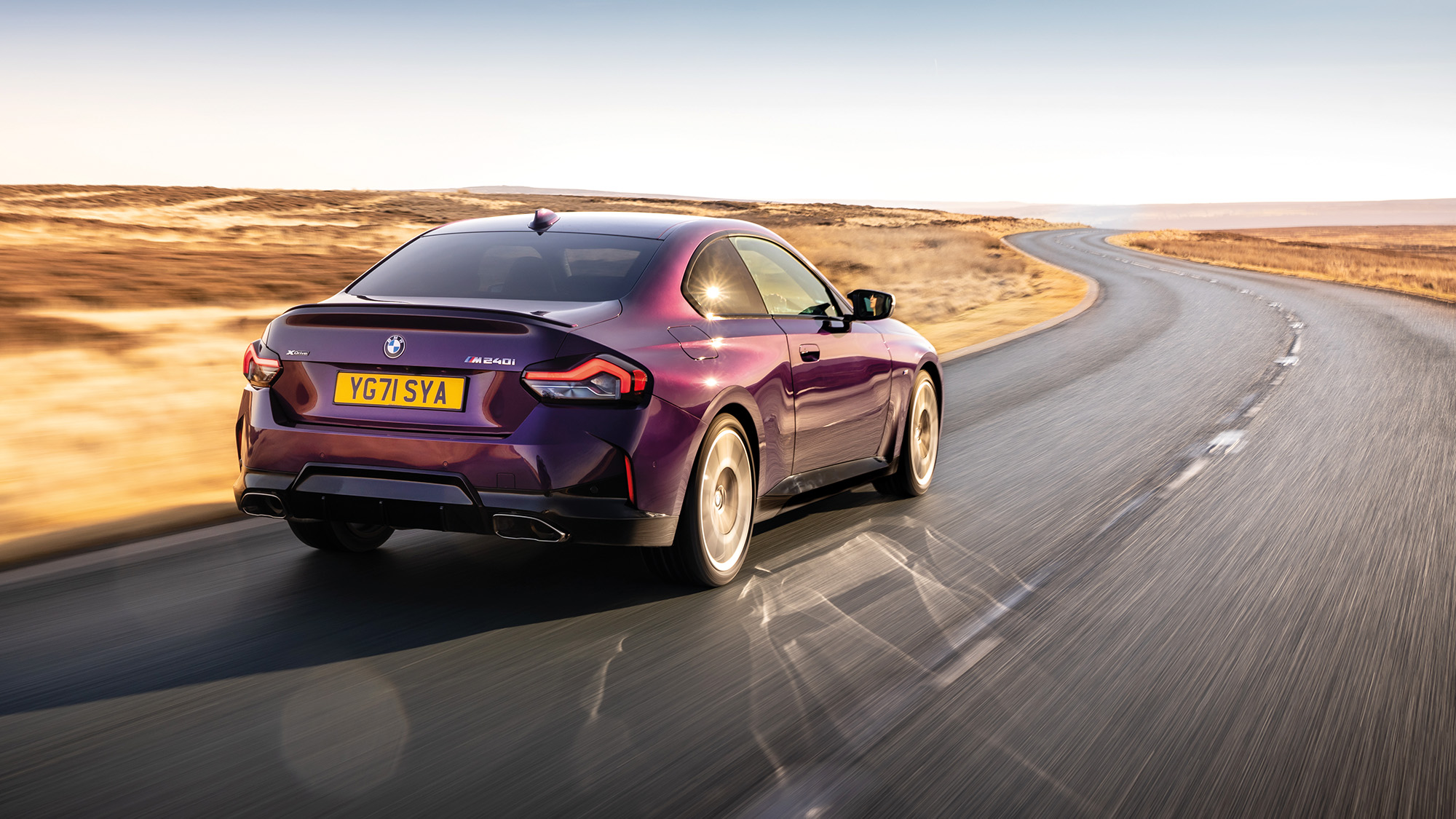 In this world where it seems nine in 10 new cars are crossover SUVs, whose greatest talent is tricking their owners into believing they make them look cool, a brand new low-slung coupé with a straight-six motor and heavily rear-biased torque split is as rare as the vaquita porpoise. And only 10 of those survive. On those grounds alone the M240i is to be welcomed.

Welcome too is the price: at £45,795 it doesn’t even seem that expensive given the level of equipment. It may not handle as well, but it’s cheaper than a base Porsche Cayman with an unlovely 2-litre four-cylinder engine producing fewer than 300bhp, as opposed to nearly 370bhp.

It also means everything remains to be played for when the proper 2 Series-based M car appears later this year. For what you’re looking at is merely the amuse bouche. The main event, in the form of a brand new M2, is on the way, and unlike the M240i we believe it will come only with rear-wheel drive and at least the choice of manual transmission. It will be more powerful still and likely lighter.

Remember too that of all the M cars it is almost without exception the smallest and lightest that turns out to be the best. For now, however, what we have here is an effective, undemanding and engaging sporting coupé. It’s not the last word in sporting prowess, but then it is not meant to be. For that fast dwindling constituency of people drawn to such cars, it does well enough. For 2 Series brilliance, you’ll need to watch this space just a little longer. I hope.