Fans of souped-up Mercedes-Benz cars will be familiar with Bodo Buschmann, who was just 22 when he teamed up with friend Klaus Brackmann 45 years ago to establish tuning house Brabus, the moniker being concocted from the first three letters of each of their family names.

It was a partnership of convenience, however, devised to satisfy Germany’s law for companies to be established by at least two individuals. Once that was achieved Brackmann lost interest and sold his share to Buschmann.

Buschmann died in 2018, but shortly before he had set about applying Brabus customising methods to a boat, having bought an 11.3 metre Axopar for his own use a couple of years earlier. He subsequently had it ‘tweaked’ by his own engineers who changed the dashboard, seats and upholstery, painted the hull and fitted a pair of ultra-powerful Mercury engines.

The project led to a joint venture with Axopar and now Brabus Marine offers a range of production and limited-edition dayboats with suitably stealthy looks and levels of performance in line with its cars.

Since Buschmann’s death Brabus has been run by his son Constantin who, mindful of the fact that the end of the road is nigh for new internal combustion-powered cars, is diversifying the firm’s portfolio. To that end Brabus recently unveiled new 300bhp and 900bhp boats, below, a KTM-based Brabus motorcycle (all quickly sold out) and, through a collaboration with Panerai, a watch range. 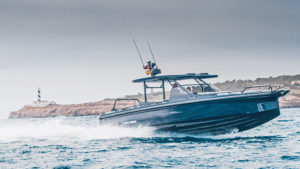 Panerai’s own link with the seas as a maker of dive watches means the two Brabus models currently available are marine-orientated – but owners of Brabus cars (and now motorcycles) will also no doubt be keen to own them.

The first, the limited (just 100 pieces) Submersible S Brabus Black Ops Edition, translates the mean and moody looks associated with the tuner’s products into a 47mm
watch with a ‘Carbotech’ bezel and the maker’s first skeletonised movement. Comprising 341 parts, it has twin spring barrels and a power reserve indicator visible through the case back.

Another version, the Submersible S Brabus Blue Shadow, was unveiled at the Palma boat show in April. Limited to 200 pieces, it features a titanium case, blue and grey dial detailing and Super-Luminova markings.

Perhaps the most intriguing aspect is its date display which takes the form of a laser-engraved glass plate topped with a polarised lens that solves the problems of a) being able to see too much of the date disc through the skeletonised movement and b) hiding too much of the movement’s workings. Ingenious, and a bit more subtle than the latest Brabus G-Wagen – the 900bhp Rocket. 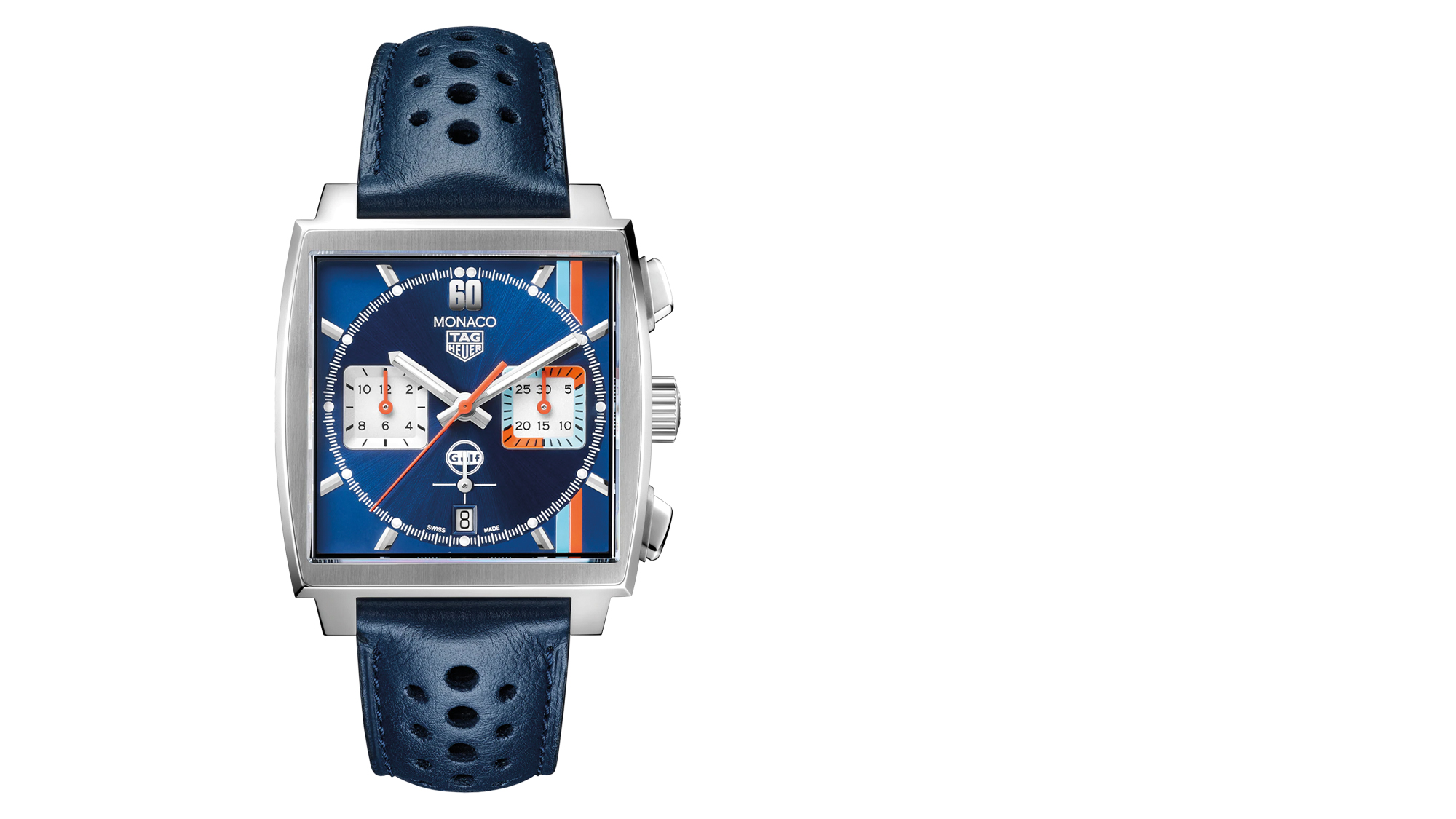 It was back in 2007 that TAG Heuer first capitalised on the Monaco’s links with Steve McQueen, the Le Mans 24 Hours and the famous livery of Gulf Oil to create a special edition of the square-cased chronograph decorated with touches of blue and orange. Now there’s a new version available, above, powered by the in-house Heuer 02 column wheel movement and featuring a transparent back and a bespoke winding rotor based on a car wheel rim. A perforated strap in blue leather lends a finishing touch. 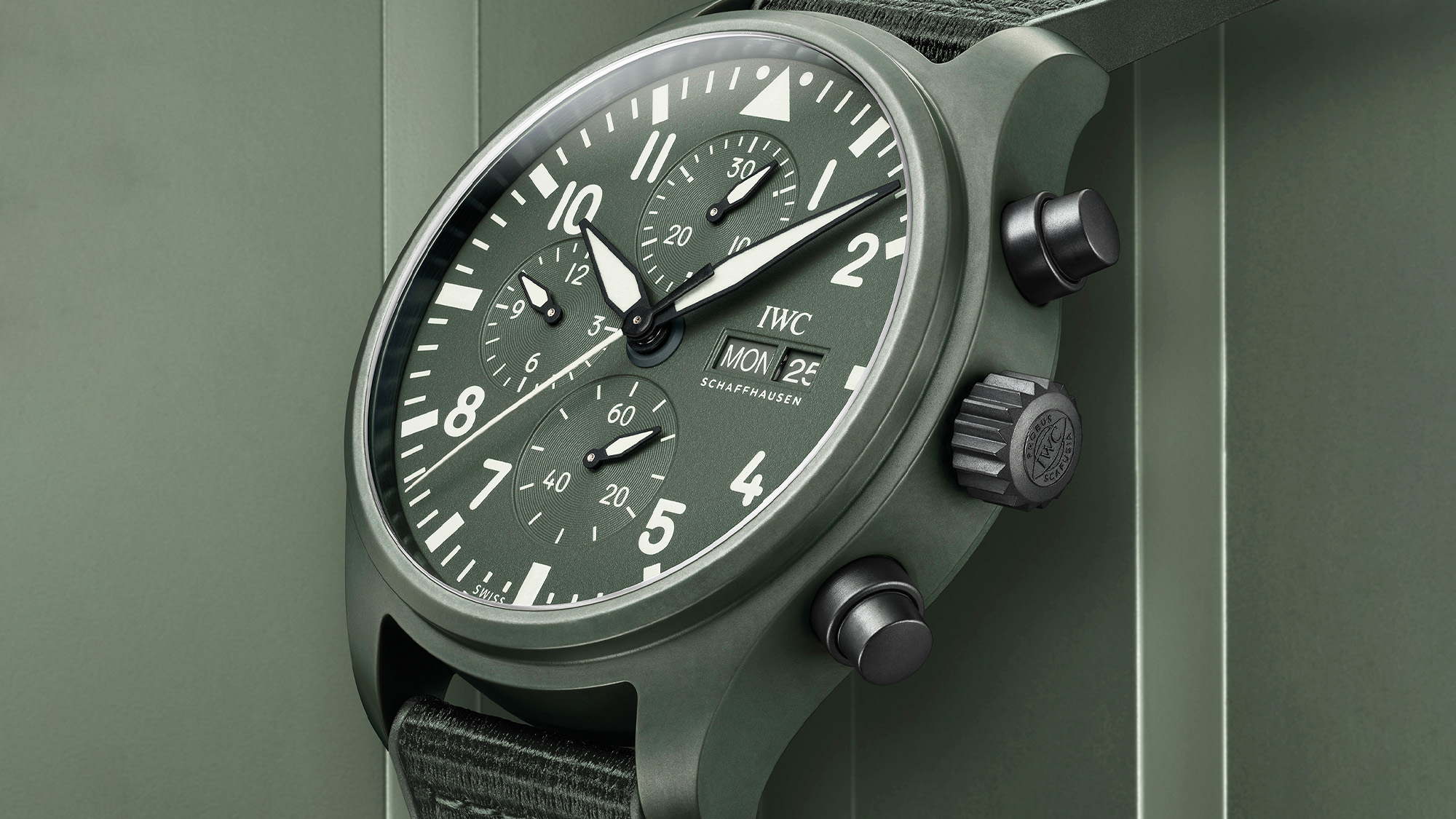 IWC, the official watch partner of the Mercedes F1 team, has unveiled three new ceramic-cased chronographs in its range created with the US Navy’s ‘Top Gun’ instructor programme. Two 44.5mm models comprise a green case and dial called ‘Woodland’, above, inspired by flight suits; the other has a white case and matching strap based on “the winter landscape of the Lake Tahoe training area”. There is also a black 41mm piece made from ceramic blend ‘Ceratanium’.