Is this the future of Formula 1? Liberty Media has long pined for a race to be held in Miami since taking over ownership of the series back in 2017, but after five years of trying, it finally has its wish.

Added to the calendar as part of its F1-breaks-America assault, the Grand Prix will run around the surrounding area of the Miami Dolphins Hard Rock Stadium.

While the bulk of the circuit is only temporary, purpose-built sections of track have been created to provide a more permanent feel to the event. 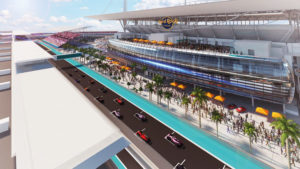 It has been surrounded by a plethora of VIP and Paddock Club grandstands, with fan areas and stands dotted around what is an impressive locale. It’s said that if you were to walk around the top deck of the Hard Rock Stadium, you could see every section of the track, though organisers reckon Turns 1, 11 and 17 are prime spots.

That’s not to mention the crane-lifted yachts that will sit in a man-made pool disguised as a marina to offer an even greater impression of glitz and glamour – a sort of Monaco across the pond.

The circuit totals 3.3 miles in length and features 19 corners, the majority of which are fast sweeps that mean top speeds just shy of 200mph are expected.

Said to be similar in its layout to Melbourne’s Albert Park, the Miami International Autodrome will be the 11th US venue to host a race on the F1 calendar.

The Miami Grand Prix will be the fifth round of the 2022 season in which Ferrari and Red Bull look set to battle it out as Mercedes scrambles to catch up.

At the time of writing, Charles Leclerc and Max Verstappen appear to be early title contenders, but Carlos Sainz will be desperate to stake his claim sooner rather than later. The Red Bull driver is the most recent winner on American soil, though – at Austin last October.

Alpine took full advantage of Toyota’s misfortune in round one of the WEC season at Sebring to lead the Hypercar championship heading into Spa. Is the Japanese manufacturer’s stranglehold of success coming to an end or was Sebring just a blip?

NASCAR’s love letter to its heritage takes place at Darlington Raceway and will feature some of the more creative liveries of the season. Who will walk away with a play-off-clinching victory?

The 2022 MotoGP season has been anything but predictable. Plenty of riders are in the hunt for the title and defending champion Fabio Quartararo will be hoping for a similar result to his podium finish at Le Mans in 2021 to remain in the hunt.

The 2022 British Touring Car Championship heads to Brands Hatch for the first of two visits during the season (the return is the final three rounds in October). Races four, five and six of the tin-top’s new hybrid era will begin to shape the title picture as the grid aims to dethrone Ash Sutton.

A third double-header of the Formula E campaign takes place in Berlin across two days. The Tempelhof Airport Street Circuit has provided plenty of action in seasons past and will mark the halfway point in the 2021/22 season.