The 50th anniversary of the Brands Hatch Grand Prix circuit will be celebrated during the annual HSCC Historic Superprix on July 3/4.

Widely regarded as one of the most challenging and spectacular sections of track in the world, the Grand Prix loop at the Kent circuit was completed in 1960 and first used for racing over the August Bank Holiday weekend. The feature event was the non-championship Formula 1 race for the Silver City Trophy, which was won by Jack Brabham (Cooper T53) from Graham Hill (BRM) and Bruce McLaren (Cooper T51).

Now, in a celebration of half a century of international racing on the GP circuit, the type of cars that contested the Silver City Trophy will be back in action as part of a programme of Historic Grand Prix Car Association races in July.

For three decades the British Grand Prix was held regularly at Brands Hatch, and the F1 cars that raced there in the 1970s and early ’80s will be back for a round of the FIA Historic Formula One Championship. Other races include rounds of the Historic Formula 2 Trophy and the FIA Lurani Trophy for Formula Junior.

Jonathan Palmer of circuit owner MotorSport Vision said: “We’re delighted that the HSCC has chosen such a special anniversary as the theme for this year’s Superprix. The Brands Hatch Grand Prix circuit is regarded by many F1 legends as one of the most challenging in the world, which makes it all the more satisfying to race on.” 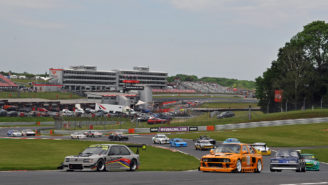