While many businesses have been crippled by the pandemic, those which can trade online have been the lucky ones. Even a high-end specialist in automobilia with a smart shop in London’s St James’s can surf the wave, as Simon Khachadourian of Pullman Gallery told me recently.

“We can’t have visitors to the shop any more,” he says, “so we’ve cranked up our online presence, re-done our website, and we produce our digital magazine more frequently now, which is a real lifeline.”

If you haven’t seen the Pullman magazine it’s worth a look via their website. We’re not talking old petrol cans; the firm specialises in memorabilia of the highest quality. Apart from the smoking requisites, militaria and aviation objects, the car offerings may cover original artwork by Crosby and Gamy, vintage trophies, fine tinplate models, bonnet mascots and unique one-off presentation pieces. Simon lists some current favourites: “There’s a silvered-bronze model of a W125 [inset], one of four given to Mercedes team drivers in 1937. Caracciola’s and Lang’s are accounted for, so this one is either Seaman’s or von Brauchitsch’s, and as it came from a lifelong friend of von Brauchitsch the provenance is pretty good. And there’s a huge model in silver of Tim Birkin’s works Blower Bentley.”

“There’s plenty out there. It just takes time to sort out the cream”

These are not for the casual purchaser – the website’s upper price bracket says “£25,000 and up”. That’s why a firm like this is able to ride the pandemic.

“We’ve always had items at the lower end,” he says, “but those tended to be impulse purchases – passers-by dropping into the shop. But now we are finding we get more specialised interest; people have more time to search for something specific. For that reason I’ve been concentrating on particular areas which not many other people are doing.”

As a consequence he feels that lockdown hasn’t hurt the business but it has shifted its character – lower volume but higher values. Also, as he points out, it can cost the same to ship a £1500 item as a £15,000 treasure. Nor has Brexit had a noticeable effect, even though most of their sales are overseas: “Our shippers deal with all the paperwork,” he says cheerfully, “including the export licences.” Yes, many of these items are so costly that they need this vital paperwork.

One thing that has been impossible lately is visiting auctions and other dealers to source new items. How does he find his stock in the time of Covid? “The power of the internet. I’m buying a lot blind but so far I haven’t been disappointed. There is plenty out there, in the trade press,
in auction catalogues, at other specialists; it just takes time to sort out the cream.

“What we are missing is the face-to-face interaction with our customers, building a relationship. But it will come back.”

In a time of gloom it’s encouraging to hear someone talking with such optimism. 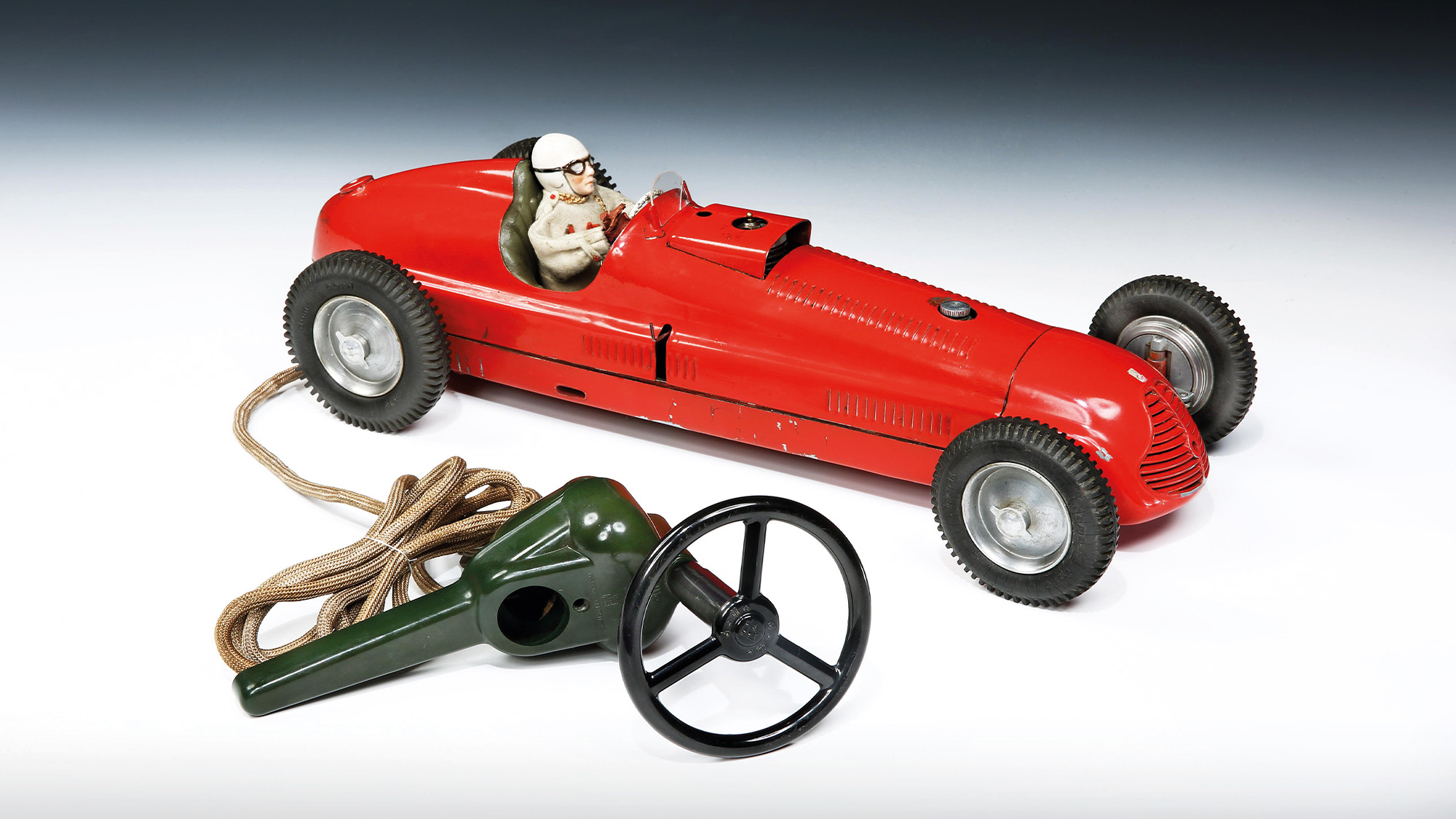 Very rare petrol-powered model of a single-seater Maserati by Italian manufacturer Domo. Dating from 1950 and 17in long, it features remote- control steering by pneumatic tube. Unusually,

it remains complete with its original fitted wooden box and all accessories, including starting cradle on which you would place the car before cranking the starting handle to spin the glow-plug motor into life. 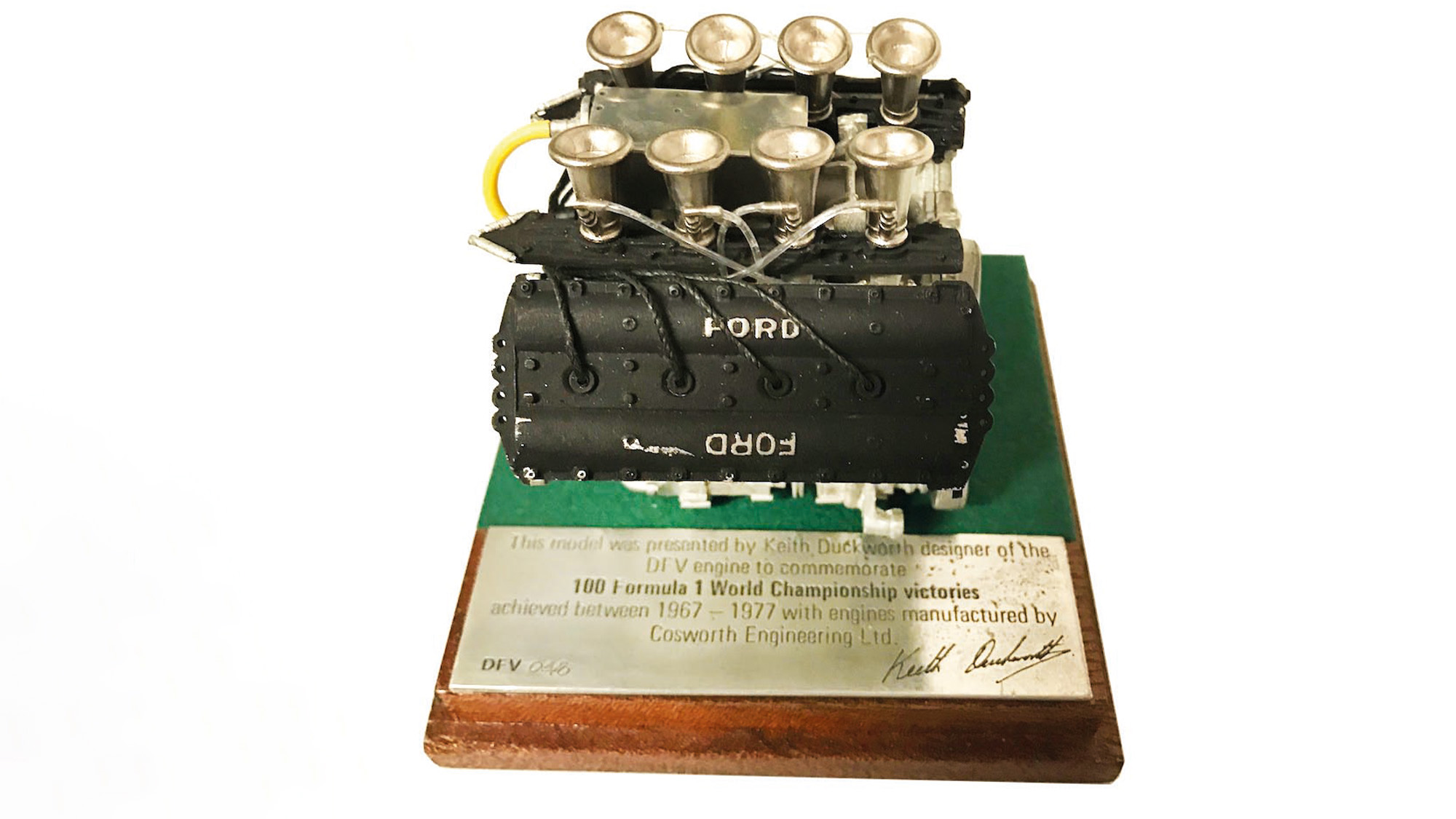 Anything made in limited editions has a cachet, while miniatures and models have their own appeal. So this scaled-down motor, created to commemorate the 100th world championship victory between 1967-77 for the all-conquering Cosworth DFV engine, scores doubly. Presented by Cosworth founder Keith Duckworth, with his etched signature, it is number 48. Mounted on wooden 10x10cm base, with Perspex case. 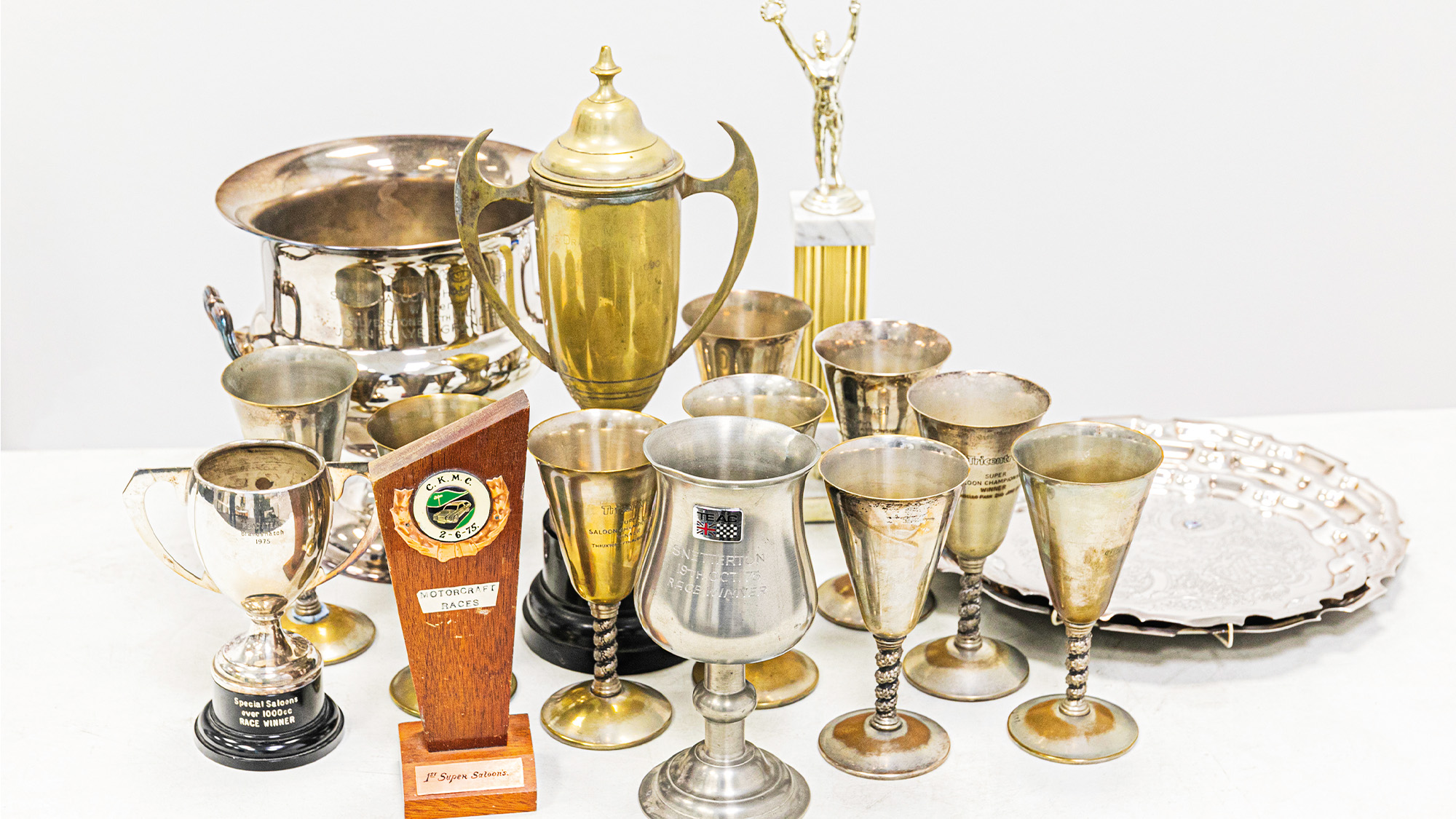 Lauded for winning some 625 races, Gerry Marshall was one of the larger-than-life figures of British racing. Some of his most memorable runs came in Baby Bertha, the special saloon Vauxhall, and this lot from Silverstone Auctions’ Race Retro online sale comprises trophies he won with that droop-snoot monster, possibly the fastest special saloon ever. There are many other Marshall items in the sale too, due on March 27. 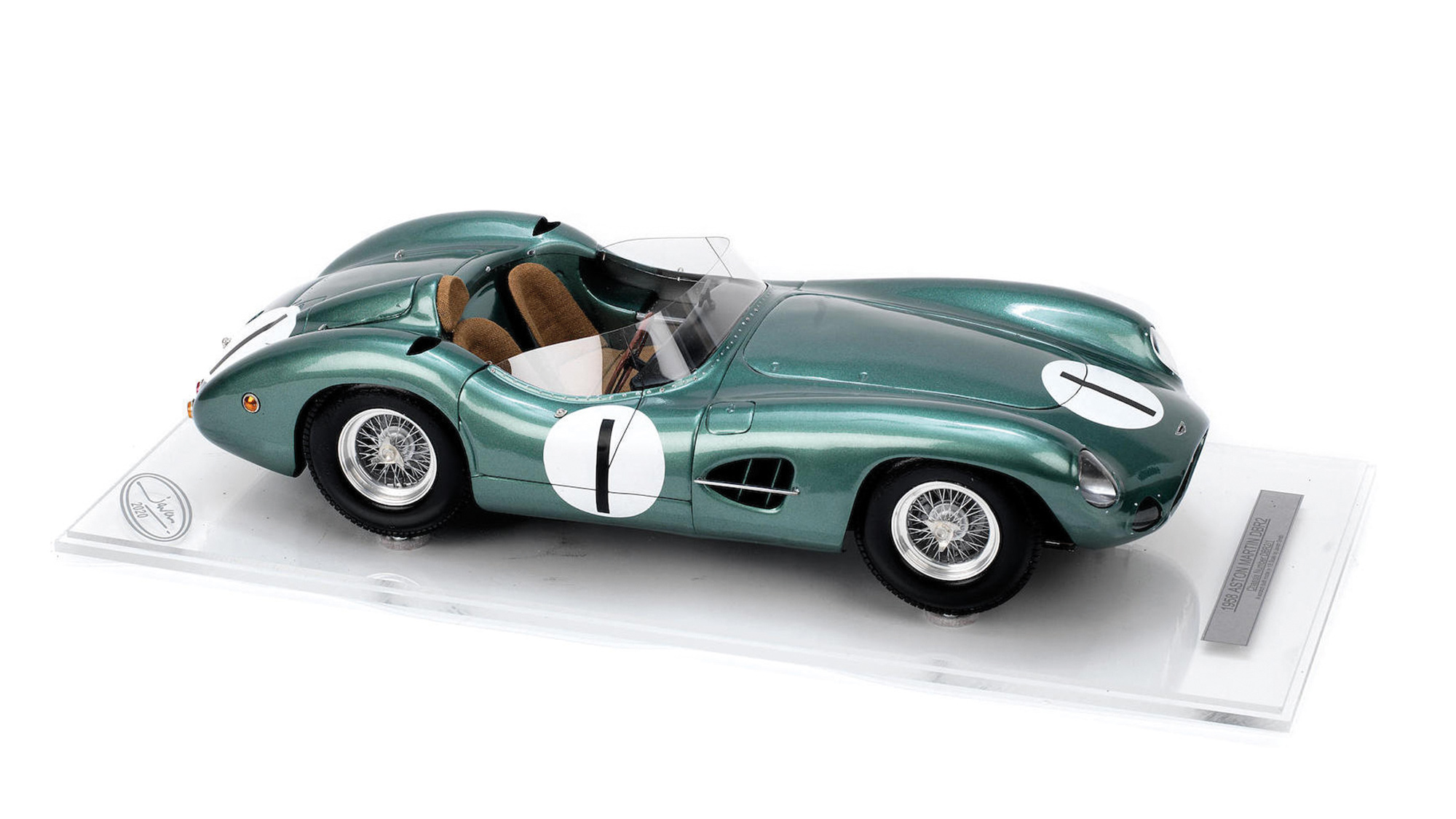 There probably isn’t a reader of this magazine without a few car models around the house, and this one would make an impact. Scratch-built in 1:8 scale by Javan Smith, it’s one of the DBR2s which contested races with the prototype DB4 engine. Car 1 took the Daily Express trophy in 1957. With fully detailed cockpit and mounted on a Perspex plinth, it sold for £3570 in Bonhams’ March online sale. 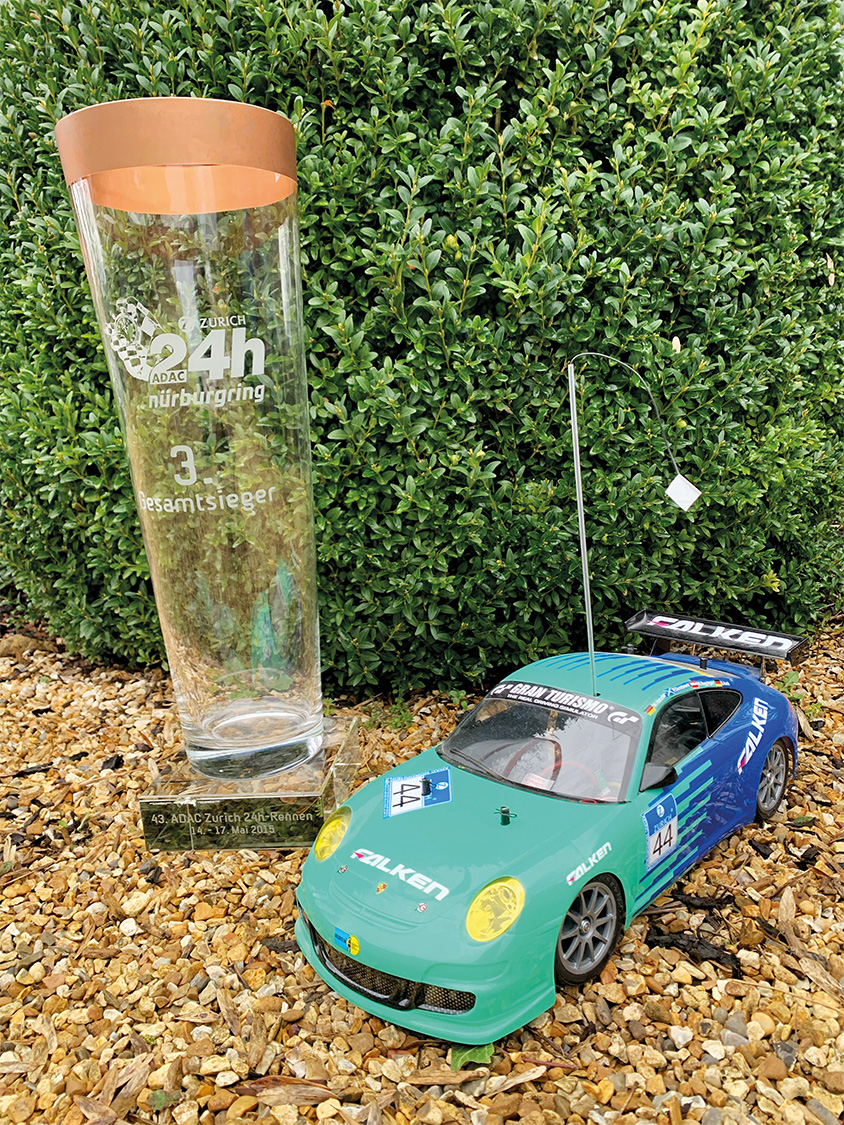 “I’ve picked my trophy from the 2015 Nürburgring 24 Hours and the matching Tamiya Porsche that sit side by side in my office. I’ve had a special relationship with the Nordschleife and Porsche. A podium was a huge aspiration for the Falken Motorsport team I drove for, and in 2015 a faultless run against the factory cars secured us third place. The trophy’s made of glass and the team’s PR used loads of hotel towels to make sure it didn’t get damaged coming home. I was given the Tamiya model of the car by Falken. Shamefully it’s a ‘shelf queen’ – I haven’t used it in anger yet!”