“Monaco is about mind management. You mustn’t get wound up and overdrive it. These days they can run over the kerbs, take more liberties. In my day if you did that you’d break the suspension. Jim Clark never won it because the Lotus was too fragile. Part of what makes Monaco so special is the proximity of the spectators. They are so close to the cars, unlike anywhere else. The grand prix is Formula 1’s jewel in the crown and if I hadn’t won it there would be something sadly missing from my career. Standing on the podium in the principality is a very special moment.”

“The Brabham BT44 was the perfect Monaco car, much smaller and narrower than any other F1 car, short wheelbase, bang on the weight limit, and very agile. On the BT44 and BT42 the nose sloped down, the drivers couldn’t see the front, so we made two balsa wood sticks, painted them day-glo orange, and stuck them on the front corners of the nose so the drivers could place the car. We had to modify the steering racks on the Brabham-Alfa Romeo because when the drivers got around to the Loews hairpin they didn’t have enough lock to get round it. Monaco is a nightmare because, if you set it up perfectly for the slow stuff, it’s going to wallow all over the place in the quick stuff like the tunnel and into Casino Square. So it’s always a compromise.”

“You don’t always need the quickest car, though it helps, because the driver can make a real difference. There’s none of this worrying about track limits. If you don’t respect them in Monaco you don’t finish the race. For the team, the logistics are a big hassle, working conditions are pretty bad, but it’s a great spectacle and we should always race there. As a fan I’ll never forget watching Senna’s pole laps, he was so quick round there, so precise. Right now I’m just elated and proud to be part of bringing Aston Martin back to the grid.”

“Of course, Monaco was one I always wanted to win, like all the F1 drivers, and I came very close. The Lotus 72 was never the best car round there but in 1973 my great friend Jackie Stewart beat me by a second and in ’75 I was on the podium again, this time second to Niki Lauda. It’s a long race, a lot of work in the cockpit in those days with so many gear changes every lap, and in ’71, I did the whole race without a clutch… and still finished fifth. It’s a special race, for sure. Everybody is there, it’s quite intense.”

“Three years after my first ever race, in a Lotus 7, I was on the podium in Monaco, a dream come true. The track was a great challenge, you had to be so precise, and it’s a place where the best drivers can make a difference. One mistake and you’re in the Armco, there’s nowhere else to go. I stood on the podium in 1967, coming third in the F3 race in the Felday Brabham. That was a great moment. There was room to overtake in an F3 car but the works Matras were too fast for us.”

“There’s a lot of pressure on the team. All the sponsors come to Monaco, and it’s a place where if the driver loses concentration he’s going to crash. Car set-up is very important, the streets are quite bumpy and the steering has to be geared perfectly for the tight corners. When Ayrton crashed while leading in ’88 he was crying when I called him after the race. I think he’d been distracted by Prost chasing him. He was obsessed about beating Prost, but there were only 12 laps to go and he needn’t have worried. A quick lap in qualifying is one thing but to keep that up for such a long race, only a very few can do that.”

Raced at Monaco for McLaren & Arrows

“The harder you try, the slower you go. Once you’ve learnt Monaco, you drive it instinctively, you feel where to put the car, feel how close you are to the guardrail. In my day it was possible to overtake. The cars were smaller, you just needed to pick the place to go off line and get it done. I loved the old chicane; it was faster, you could power slide out of there. It’s absolutely one of my favourite circuits and I really loved racing in Monaco. It’s so much more fun than some of the sterile new circuits.”

“The highlight of my weekend with the Ensign in 1980 was managing to qualify in the rain on the Thursday. I was very proud of that, but we didn’t make the grid on the dry Saturday. I blame Carlos Reutemann… I kept coming across him crawling along at the swimming pool and then weaving around all the way to Rascasse. Then he’d disappear again on a fast lap. Anyway, just to drive an F1 car round Monaco was a joy. Up the hill from Sainte-Dévote and into Casino Square is fantastic. It’s a track where your brain needs to be ahead of your body. That’s why Senna and Prost were so good there.”

Second-place finish at Monaco in 1994

“As a driver I adored it. I got one of my best results there in 1994, when I finished second for McLaren, and was running third for Brabham in 1989 when the battery lost charge and I slipped to sixth… I loved street circuits in general and Monaco in particular. The most nervous moment of the season was probably going out to qualify around there, because you knew the balance of your weekend was about to be enhanced or wrecked because of the importance of a grid position. If you qualified badly or whacked a wall, you might as well have gone home. Now, the highlight of my season is trackside in Monaco, watching cars through the first part of the swimming-pool complex – absolutely awesome.”

“It is such a cool track. You feel closer to the limit because of the barriers, but the best drivers feel comfortable on the limit, or close to it. To have won at Monaco would have been a dream but at Haas we were fighting for points. It’s one of the best circuits we go to and over the years all the great drivers have done well there. I liked it, a proper racing driver’s circuit, one of the best.” 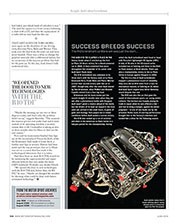 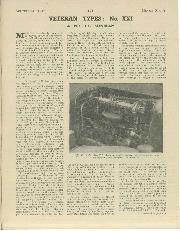 A 1914 T.T. Sunbeam Mention has already been made in MOTOR SPORT of the wonderful collection of old cars at Short's garage in Chelsea, ministered to by Cecil Clutton. It… 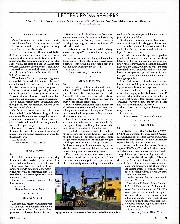 Sir, After viewing Eric Kent's letter in the March edition of Motor Sport, I felt the urge to contact you with the details of what happened to the No40 Group… 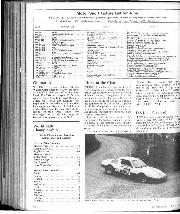 Rising of the Clan

About 18 months ago, Clan Cars Ltd, of Newtonards, Co. Down, revived the very pretty Clan Crusader which, produced by a different company, disappeared from the market ten years ago.…