It seems so improbable: a century has elapsed since Alfieri Maserati set up shop in Bologna, initially carrying out general engineering work and perfecting his own brand of spark plugs.

Scroll forward to the present, and his surname is synonymous with exotic GTs and illustrious racing cars. Alfieri and his siblings forged a legend, one that cannot be distilled into an attention-grabbing soundbite. For all the trackside glory and showroom success, there have been just as many calamities, pratfalls and bankruptcy hearings. It’s what makes the Maserati narrative so compelling: the soap opera boomerangs of serial ownership, Italy’s political machinations and the pressure of outside forces have shaped one long fantastical yarn, one that is festooned with enthralling details.

As Maserati celebrates its 100th year, it is chasing new markets (think of a Modenese SUV, and then stop thinking) and German opposition in the premium saloon car sector. It craves big numbers and there is every possibility that it will give rivals a bloody nose. That said, the old guard is understandably concerned about Maserati’s cross-pollination with ‘lesser’ brands, and with good reason, but Maserati has rarely been on a firmer footing in its entire existence.

A is for Alfieri, Giulio

This Parma-born engine designer and chassis engineer was once the heart of the competition department. Alfieri devised most of the great Maserati road and race engines prior to leaving for Lamborghini in the mid-70s (he helped turn the firm around with the Quattrovalvole V12). His bulging CV included the Tipo 61 ‘Birdcage’, the V8 that powered the 450S sports-racer and the compact V6 inserted into cars such as the Merak and Citroën SM. He also had input into the V12 F1 engine employed by Cooper in 1966-67, and engineered the fabulous Bora supercar, if only in part.

B is for brothers

Officine Alfieri Maserati was founded on December 14, 1914 in Bologna, Italy by Alfieri Maserati, with brothers Ernesto and Ettore Maserati joining the firm at the end of WW1. Bindo Maserati joined the company in 1932 following the death of Alfieri. The brothers stayed on after the marque was acquired by Adolfo Orsi in 1937, under a 10-year contract, but their relationship with the new regime wasn’t a happy one. Ernesto, Ettore and Bindo left in 1947, setting up shop in a disused part of the original factory in their home town of Bologna to build small-capacity racing cars. Because Orsi owned the rights to their surname, they contrived the extravagant alias Officina Specializzata per La Costruzione di Automobili – Fratelli Maserati SpA. Or OSCA to its friends. With Ernesto as designer, Ettore the artisan and Bindo running the show, the trio ushered in their first model, the MT4 (Maserati Type 4), in 1948. OSCA was soon at the forefront in the 1100cc tiddler class, often in contention for outright wins, too. After dabbling in Formula 1 (and F2), the brothers wisely stuck to sports cars, the highlight being victory in the 1954 Sebring 12 Hours for Stirling Moss and Bill Lloyd aboard their MT4 1450.

C is for Chrysler

Much has been made of Fiat’s Chrysler and Maserati brands sharing DNA, not least within the motoring media. There is every reason to worry: marque types remain traumatised by the last time Chrysler and Maserati collaborated on a project; one that remains a lesson from history. The risible Chrysler TC by Maserati (to give the car its full title) married a modified Chrysler K-car platform with assorted four- and six-cylinder engines, only one of which was made by Maserati. Production began in 1989 and ended in ’90. Shock

WIN a unique copy of Maserati: The Family Silver worth £12,950

D is for de Tomaso, Alejandro

Middling racer, prolific car builder and canny (some might say Machiavellian) industrialist who bought Maserati in the mid-70s. He didn’t use much of his own money, though. Instead, the Italian government provided backing to the Benelli motorcycle firm (which de Tomaso controlled), which in turn bought the firm and installed de Tomaso as its principal. Maserati subsequently opted for volume manufacture with the Biturbo, the marque’s reputation taking a battering thereafter as warranty claims mounted up.

E is for Emilia-Romagna

This region of northern Italy is home to Maserati and a certain other red-car maker. Oh, and let’s not forget Lamborghini, Pagani, Ducati and countless specialist suppliers. It really is the country’s ‘motor valley’.

F is for Fiat

De Tomaso sold out to Fiat in 1993, by which time Maserati was on its knees. Closer ties with Ferrari ensued, not least with sharing technology, but these have since loosened.

G is for Gran Turismo

Few marques ever ‘got’ the gran turismo concept quite so completely. The firm has produced some of the great GT cars, be it the many variations of A6G, the 3500GT, 5000GT (above), Mistral, Sebring, Mexico, Khamsin and, of course, the mighty Ghibli.

H is for Hug, Armand

This Swiss racer drove Maserati sports cars and single-seaters. He won the 1938 Bern Grand Prix aboard his privateer Maserati 4CM, which raised several eyebrows. He was awarded a works drive for the following year’s German GP, only to crash a week earlier while practising for the Albi GP. The accident left him paralysed.

I is for the Indianapolis 500

Wilbur Shaw claimed back-to-back wins at The Brickyard aboard an 8CTF in 1939-40. The ‘Boyle Special’ belonged to, cough, ‘colourful’ Chicago union leader, Michael Boyle (aka ‘Umbrella Mike’). Shaw was leading the ’41 event only for a broken wheel to deny him a possible hat trick. The venue also lent its name to the Indy GT car from 1968.

J is for the two Juans

Juan Manuel Fangio and the Maserati 250F are inextricably linked, El Maestro claiming a win for the model on its 1954 Argentinian Grand Prix debut, while also taking his fifth and final Formula 1 world championship title in 1957 with the works team. It crowned his stop-start involvement with the marque, which stretched back to the late ’40s. However, the factory team also folded in 1957. A deal with Argentina’s Juan Péron government, for the supply of milling machines, resulted in a major cashflow crisis after the regime was deposed in 1955. Contracts counted for little (the same being true of a similar arrangement with the Spanish government), and Orsi was left with a gaping hole in his coffers. Maserati almost went to the wall as a consequence, but there was light at the end of the tunnel: the marque’s first proper volume-build road car was about to come online. The Touring-styled 3500GT broke cover at the ’57 Turin Motor Show and soon found custom. Without it, the marque would likely not have seen out the decade.

K is for Kyalami

Maserati’s swansong as a winner in Formula 1 was as engine supplier to Cooper. Pedro Rodriguez’s 1967 South African GP win at Kyalami was also the last world championship-level triumph for the British constructor. The Kyalami name was also employed on an angular coupé from 1976.It was essentially a restyled De Tomaso Longchamp with Maserati running gear (and a much better car than that sounds).

Lloyd ‘Lucky’ Casner’s Team Camoradi maintained Maserati’s standing as a player in top-flight sports car racing after the works team pulled out at the end of 1957. Stirling Moss and Dan Gurney claimed the 1960 Nürburgring 1000Kms aboard the team’s Tipo 61, Casner teaming up with Masten Gregory to win in ’61. The charismatic American’s famous luck ran out when he crashed fatally during the 1965 Le Mans test weekend in John Simone’s Tipo 151/3.

M is for Monza

The scene of many a Maserati test session, racing success and media launch.

N is for Nuvolari, Tazio

The ‘Flying Mantuan’ was a prolific winner for the works team in 1933-34. He also claimed his last major victory in the July 1946 Albi GP, at the wheel of a 4CL.

This self-made industrialist’s Gruppo Orsi empire encompassed numerous businesses that sustained the marque’s involvement in top-flight motor sport. He bought the marque in 1937 and moved operations from Bologna to Modena.

P is for Pininfarina

This Turin styling house has shaped Maseratis (A61500, Quattroporte V etc), but the 1954 A6GCS Berlinetta is arguably its greatest contribution to marque lore.

Q is for Quattroporte

Maserati established the QP template with a V8-engined, Pietro Frua-styled super-saloon in 1963, and subsequent generations have captivated in equal measure. More recently, the QP has become a successful – if unlikely – racer in the Superstars series. 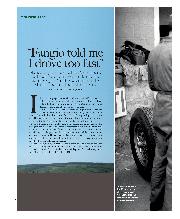 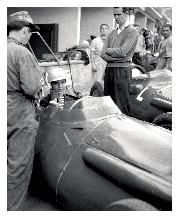 I have recently spent some time with a remarkable woman, so spirited, so passionate, so bright-eyed. And she is 85 years old. We salute the first woman to race in…

R is for race returnee

Maserati returned to motor racing in an official capacity in late 2004, after 37 years away. Up to 2009 the Ferrari Enzo-based MC12 claimed 40 wins from 94 FIA GT race starts.

S is for SM, Citroën

The alliance of Citroën and Maserati in 1968 led to arguably the greatest/worst GT car of its era; a masterpiece of French style, Italian design and French/Italian reliability. Its Alfieri-conceived V6 engine was also used in the Quattroporte II, Maserati Merak and Ligier JS2.

The first Maserati car and also its first race winner: it claimed ninth overall and class honours on its competition debut, the 1926 Targa Florio, with Alfieri Maserati at the wheel. His riding mechanic, Guarino Bertocchi, remained with the firm for 50 years. He tested every road and racing car to emerge from the mid-20s to the 1970s – often on the road!

U is for USA

Aside from Maserati’s Indy wins, the marque also claimed a 1-2 finish in the 1957 Sebring 12 Hours. And that is before you factor in everything from Vanderbilt Cup entries to SCCA triumphs.

V is for Villoresi, Luigi

Something of a Maserati constant, ‘Gigi’ became a works driver in 1938, and a winner the following season, only for World War II to interrupt his career. He returned to the marque in the immediate post-war years, but then jumped ship to arch-rival Ferrari. He rounded out his front-line career with a return to Maserati, racing a works 250F at world championship level despite being well into his forties. In addition to his many wins in single-seaters, Villoresi also claimed sports car honours for the marque on the Targa Florio in 1939-40.

W is for water

Maserati also built race engines for hydroplanes, the 450S unit for example enjoying a lengthy career in Europe and the US long after the car itself had faded from memory. Briggs Cunningham was one such entrant.

X is for X-Files

There have been countless experimental cars and prototypes that were rarely seen in public, if at all. Among the most tantalising of the last 30 years was the mid-engined Chubasco from 1990 which remained a one-off (and non-functioning) supercar.

Maserati was the first Italian manufacturer to switch from ‘Spider’ to ‘Spyder’ for an open production car. We’re still annoyed.

Z is for Zagato

This most characterful of Italian coachbuilders features prominently in Maserati lore. From its rakish form for the 16-cylinder Tipo V4 of 1930 to the GS Zagato Coupé of 2007, it has produced umpteen memorable outlines. And while a variety of carrozzerie left their mark on the sublime A6G54 of the early to mid-50s, Zagato’s offering was beyond masterful. Typically, it went its own way and shaped a series of pared-back road racers rather than tinsel-laden flights of fantasy. They still stack up as landmark Maseratis. By contrast, the less said about the Frank Costin-conceived, Zagato-interpreted 450S of 1957 the better. As for the Zagato-assembled Biturbo Spyder – well, it was only a subcontractor…