We’re out the back now, the chicanes behind us. The oil is warm, the slicks are hot. I can feel the V12 chuntering behind me. It is demanding its release. Third gear, 4000rpm and go. The thrust is almost overwhelming – 750bhp in less than 900kg of car tends to do that for you. No time to listen. Fourth and the madness resumes. Can a single engine really be doing all this? Despite being protected behind plugs, balaclava and helmet, my inner ears start to itch. Fifth, and the whole crazy show begins again, an insane shrieking symphony blasted out by a 12-cylinder orchestra. And the craziest thing of all? Today I am its conductor.

Famously Jaguar won Le Mans five times in the 1950s. But how many times in that period did it also claim the World Sportscar Championship after its inauguration in 1953? Trick question: the answer is none. Indeed it would not be until 30 years after the retirement of the 1950s works Jaguar racing team that Jaguar would have a proper crack not just at Le Mans, but the championship itself.

The year was 1987 and the car the Jaguar XJR-8. And for the first time since Porsche entered Group C racing in its 1982 inaugural year, the Stuttgart machines were beaten. Actually, they were routed. There were 10 championship rounds that season and Jaguars won eight. Of those eight races, four were won by a single car, chassis XJR-8 287. This car. So not only did it do the lion’s share of the work in delivering to Jaguar its first ever world championship in motor racing, it made the Brazilian Raul Boesel the first man to win a drivers’ championship in a Jaguar, for he was at the wheel every time it won, usually sharing with Eddie Cheever, but once with John Nielsen.

It is therefore an incredibly important car. Certainly it was more successful than the XJR-9 chassis 488 which only won a single round of the championship but is far better remembered because it happened to take place at Le Mans the following year…

Its first win at Jerez was an exercise in the survival of the fittest with only eight of 20 starters seeing the flag. It appeared to be an easy win with a three-lap margin of victory, but it came after two unscheduled pitstops and with the pole-sitting works Porsche 962C of Derek Bell and Hans Stuck having to manage an unhealthy powertrain. We’ll gloss over Monza where a certain Jaguar 1-2 was lost when Boesel stayed on slicks too long after it had started to rain and parked the car in the gravel.

“There were 10 championship rounds in 1987 and Jaguars won eight ”

The second victory came instead on home turf at Silverstone when the only real question was which Jaguar would win. Both had problems – Boesel a puncture, Jan Lammers in 187 stalling at his pitstop – but after a late safety car Cheever outsprinted Lammers, setting a new lap record and taking the flag.

Being originally intended as a sprint car, 287 sat out Le Mans so played no part in the disaster it would be for Jaguar (one out of three finished, down in fifth place), so reappeared at the Norisring where results would be awarded on aggregate after two heats. Cheever had no luck in the first, losing seven laps in the pits, but Boesel won the second placing them fourth overall.

But at Brands Hatch 287 won again, Boesel snatching victory despite spinning and damaging the car trying to pass Mauro Baldi’s 962C, putting him into the championship lead for the first time that season.

The team title was delivered at the Nürburgring which 287 dominated, putting three laps on the field, leading a train of no fewer than seven thirsty 962s, most struggling to mete out their fuel allocation. 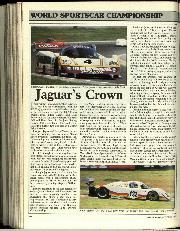 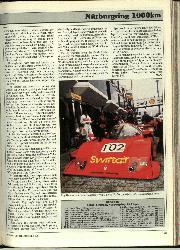 Five years of Porsche domination in Group C ended at the Nürburgring, when the Silk Cut Jaguar team recorded its sixth victory of the season and secured the 1987 Teams…

Fuel injection problems relegated the car to fourth at Spa, a race worth noting here only because of a typical piece of TWR smart thinking that won Boesel the title. The rules stated that to score points a driver had to be behind the wheel for 30% of the race, but which of the three Jaguars entered had the best chance of victory? No one knew. So Tom’s answer was to enter the Brazilian as a driver for all three of the XJR-8s and keep him in reserve until the likely winner emerged. It turned out to be chassis 387 of Martin Brundle and Johnny Dumfries into which he was duly parachuted for a single, title-winning stint.

The final race was at Fuji, where the two Jaguars were utterly dominant, Boesel and Dumfries dutifully following Lammers and Watson home to allow the latter pair to overtake Derek Bell and Hans Stuck to share second place in the driver’s championship.

But chassis 287 was not yet done. Upgraded to XJR-9 specification it spent some of 1988 as the T-car, but was wheeled out as part of TWR’s five-car assault on Le Mans where it was driven by Boesel, Watson and Henri Pescarolo but retired early with transmission failure.

It was back at Le Mans in 1989, finishing eighth with the Ferté brothers and Eliseo Salazar driving and finally in Mexico where Alain Ferté and Andy Wallace brought it home in fifth place. It seems fitting that this car which had delivered Jaguar’s first World Sportscar Championship would also be the best-placed Jaguar at the last round in which a V12 Jaguar would take part.

Although it raced as an XJR-8, XJR-9 and XJR-9LM, 287 presents today in original and, to these eyes, most gorgeous XJR-8 specification with those huge venturi tunnels at the back making no secret of the key to this car’s speed. It is a downforce monster, helped considerably by the narrow 60-degree angle of its V12, especially compared to Porsche’s rival 180-degree flat-six motor.

Today we are Thruxton, Britain’s fastest race track – rather fitting for such a machine. It has been brought by Moto Historics, which looks after it and makes sure it is in the finest fettle. Today it most certainly is: its 7-litre V12 motor is producing the full 750bhp, as much as any Jaguar V12 that raced. This is also getting on for three times the power the engine produced on 5.3 litres when first installed in the E-type in 1971. It is a daunting machine to tackle, especially at a place like this. The car is no museum piece but ready to race and I am told to treat it as such.

The cockpit is cramped but what you really notice is how old it looks. There cannot be another area in which the advance of modern technology is more obviously apparent than the interior of top-level race cars. Very little progress seemed to have been made in here since the late 1960s. There’s a bare Momo wheel, minimal essential instrumentation ahead, three more minor dials to your left sitting below a bank of simple switches. To the right of the wheel are four further switches for ignition, injection, fuel pumps and start.

It bangs into life easily and idles angrily. Beyond that domed cockpit you can see people grinning as they bury digits in their ears. The March gearbox was always the weak point on these cars and it’s not even that quick a shift. I’ve often wondered how many races Group C Porsches won and finished because the factory had the good sense to fit them with synchromesh boxes. The clutch is gentle enough not to make an idiot of you and soon you’re trundling down the pitlane, out into the unknown.

You’d think that with a large, torque-laden V12 motor, the XJR-8 might be easier to drive than a Porsche 962C. But it’s not at all, and for several reasons. First you have to think at all times about the gearbox to avoid wrong-slotting or damaging a cog. Second, that engine may be powerful, but its size and weight mean you can’t lean on the car as easily as you might a far shorter and lower flat-six Porsche motor. It is a car you could easily spin under braking into a corner and with only a little more difficulty, under power coming out of a corner.

It feels cumbersome in the chicanes too, inclined to push its nose wide thanks to the tightness of its differential. But once you get it hot and up to a decent speed, it is simply phenomenal. The torque is such that you’re always a gear up on where you’d expect to be, yet it still slams you violently into that carbon rear bulkhead every time you floor the throttle. Peak power is at a modest 6500rpm but its already working hard at 4000rpm, the V12 so loud, complex and melodious I briefly flirted with the fantasy of being a passenger so I could concentrate on its sound without having to drive the car.

But no, I’d hate to be a passenger because I’d have been physically sick within a lap, two at most, because once you’re out the back of the circuit and can make its aero work, how fast you go is determined pretty much by how brave you’re feeling. Owner Henry Pearman later discovered it would take Church flat in fifth and while I was having a proper lift, even with me driving it was still pulling 6000rpm in top approaching the chicane. It clearly has sprint gearing but that still struck me as being plenty fast enough.

I found in just a few quick laps the car to be physically and mentally draining in a way I had never felt a few years ago when I was lucky enough to drive its exact contemporary, the 1987 Le Mans-winning Porsche 962C for far longer at the much more technical Weissach test track.

Truth is the XJR-8 is a beast, one requiring a driver with a level of skill and experience far beyond my own to master, let alone keep in one piece over a gruelling 24-hour period. Perhaps that’s why TWR only hired the best and never attempted a lucrative customer programme such as that enjoyed by Porsche. 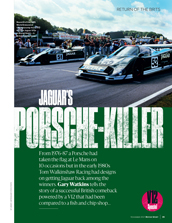 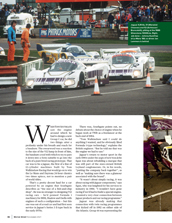 When Tony Southgate saw the engine around which he had to design a new Group C car, he did two things: utter a profanity under his breath and reach for…

But as just a thing to get in and drive, the XJR-8 provided not just a mesmerising experience, dominated by the sound and fury of that iconic V12, but one that left me feeling humbled by the thought of those who did so not merely for a few laps but hour after hour, in all weathers, through day and sometimes night.

But that was what was required to do the job and end the reign of the Porsches. And it was the XJR-8 that got the job done, the most successful of which is that you see here. What a privilege to have been able to make its acquaintance.

Our thanks to Henry Pearman, Moto Historics, Gold Track and BARC for their help making this feature possible.