Make no mistake, the V12 engine is a dead man walking. For over 100 years and on both road and track we have marvelled to the sound of a dozen perfectly balanced cylinders and, when bonnets were lifted, thrilled to their sight too. To me there is no greater expression of what I love about engines than the sight of a Ferrari Testa Rossa V12, with its red cam covers sandwiching a regiment of twin-choke downdraught Webers.

But they’re finished. Despite the fact that V12s are still used by Aston Martin, Bentley (if you count its strange W12 formation), BMW, Ferrari, Lamborghini, Mercedes-Benz and Rolls-Royce and with two more about to go into production – of which more in a minute – their days are numbered.

Of course, manufacturers like Ferrari and Lamborghini, which have built their reputations on the back of the V12, won’t give you a precise sell-by date, but their future is simply not sustainable. These engines are magnificent dinosaurs, padding about the planet, watching the asteroid of electrification hurtle earthbound, knowing that nothing but extinction awaits. Will any still be here in 10 years? Not a chance.

So it says something for the human spirit that at least two brand new, designed-from-scratch V12s are shortly to go into production. Both are built by Cosworth; one displaces 6.5 litres and is destined for the Formula 1-derived Aston Martin Valkyrie; the other a more modest 4 litres designed for Gordon Murray’s McLaren F1-replacing T.50 supercar.

There are several interesting aspects to both engines. Most notably and despite the vast amounts of additional power and torque that would be available, neither is turbocharged. Yet both make full use of the V12’s greatest traditional strength: yielding maximum power from any given capacity. In the Aston’s case that’s a nice round 1000bhp, while the T.50 has just 654bhp. But in fact it is Gordon Murray’s motor that has the highest specific output, each litre providing a motorcycle-like 164bhp, compared to the Aston’s 154bhp. However while the Aston engine sounds quite peaky, requiring all of 7000rpm before it’ll yield its 545lb ft of torque, Gordon’s car is playing a different game altogether, needing 9000rpm to deliver just 345lb ft of torque. The former will spin to 11,100rpm, the latter a dizzying 12,100rpm. 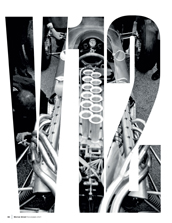 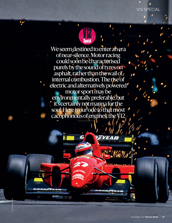 We seem destined to enter an era of near-silence. Motor racing could soon be characterised purely by the sound of tyres on asphalt, rather than the wail of internal combustion.…

They can do this because both are unimaginably expensive, ultra-low-volume cars that are purely recreational in purpose and which will live as small parts of large collections and only be brought out, if at all, when conditions and the environment are exactly right for them.

But why did both companies choose a V12 configuration? For Aston Martin it wasn’t actually an immediate choice. They looked briefly at a V8 and rather longer at a twin-turbo V6 but ultimately reached the same conclusion at which Gordon Murray arrived, albeit for slightly different reasons. Aston chose a V12 partly because, well, it’s a V12, but also because its relatively narrow (65-degree) vee angle and absence of turbos, intercoolers and associated plumbing would provide as little impedance of the air flow under the car as possible, allowing downforce to be maximised. Gordon Murray chose 12 cylinders largely because he felt that it was the ultimate configuration for his ultimate road car.

Interesting that. Twelve cylinders, not 16. True, V16 road cars have not been around for quite as long as V12 road cars but they’ve still been built on and off for over 90 years. There’s no specific engineering reason for it: a V16 is perfectly balanced so I think what we’re seeing is the Goldilocks effect coming into play. Engines below a certain capacity don’t gain enough in terms of additional power over a V12 than they lose in terms of mechanical complexity, which is why the only 16-cylinder engine in production today is Bugatti’s 8-litre monster used in the Chiron. That said, if you built, say, a 6-litre supercar engine with fewer than 12 cylinders, you might not be too bothered about the potential lost power, but some people will just feel a little short-changed.

It’s the reason Mercedes-Benz keeps an ancient V12 for its Maybach limousine despite the fact its AMG V8 is a far more modern and better engine, capable of producing much more power. And it is known many Bentley customers will only choose the 12-cylinder motor, perhaps through fear of being trumped, regardless of its suitability. Rolls-Royce, since its rebirth 18 years ago, has only ever installed V12 engines below those imposing bonnets.

Simply put, and in the world of the petrol engine, even when a V12 may not be technically the best choice, it is still seen as such. It comes with an emotion dimension, a pedigree and class other configurations lack. But that world is perishing before our eyes. Internal combustion engines are shrinking, withering away and soon will be dead. And the V12 will be among the first to be officially listed as extinct. They are already some decades from their heyday and exist now more as curios, charming remnants of a time that has been, but is now almost gone.