Since the September issue of Motor Sport was published this country has entered into war against the German Reich. The following week a quick decision was made to suspend publication of Motor Sport until motor racing was in full swing again, but we have received so many requests from our readers not to stop publication that it was ultimately decided to produce the October issue in its present form.

The usual method of distribution, namely, on sale or return, will definitely be stopped, and wholesalers and newsagents will only receive copies against firm orders. Will you, therefore, place an order with your newsagent (if you have not already done so) or take out an annual subscription? The strength of this support will determine whether Motor Sport will continue during the War months. By the time this issue is in your hands we shall be experiencing the limitations which war exerts on civilian life. Petrol will be strictly rationed, and pleasure motoring will be curtailed for most of us to an individual mileage of approximately 200 miles a month—or less than many of us lightheartedly put into a day’s driving in peacetime. And many sports motors will be virtually inoperative, because, excellent as the 1/6 per gallon “Pool” fuel has so far been, it is a poor substitute for the special petrols which certain supercharged and high-compression engines find essential.

However, much as we shall mourn the “good old times” when there were long, fast runs and motoring fixtures to attend every week-end, in company with fellow sportsmen and the inevitable and indispensible sportsgirls, we shall all face the future bravely. If it is an exaggeration to suggest that slime-storming is already a driving attribute sought after by recruiting army officers, unquestionably the qualities which stamp a man a motor racing enthusiast, are going to be of real value in the stern times which lie ahead.

Although, in A.R.P. work, so far few of us have been able to put our experience of fast cars to any real purpose, yet already our ability to drive under difficult conditions, to handle with confidence unfamiliar vehicles, and particularly to stand up to long hours without sleep or substantial food, have proved of use. And the very extensive use of high-efficiency motor vehicles by the Air Force and Army must find further outlet for such abilities if, and when, general recruiting comes about. With the exception of the Phoenix Park race, every motoring fixture since September 1st has been cancelled. So naturally Motor Sport has reluctantly had to shrink and, indeed, appears only because of our firm desire to “carry on.” We hope that we shall be able to do so during the dark days which lie ahead, ready to expand again when Nazi Germany has been put in her place. It is possible that some of the clubs will soon be able to put over social activities, even if many members have to use public service transport to attend. We may hope that publications like “Bugantics” and the Vintage Bulletin will continue to appear. And, finally, will readers please write to us on any topics of motoring interest, so that we can contrive to put something stimulating into the abbreviated pages of this paper “for the duration?” On this note we present our October issue, as yet another, if insignificant, challenge to a fanatic called Hitler… 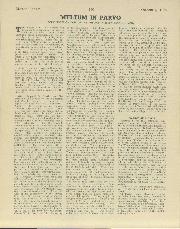