British Austin Victorious The Automobile Racing Club of America defied the road-course ban and staged a 50 lap road race at Alexandria Bay, near New York, last August. The starters comprised three Austin Sevens, five M.G.s, two Bugattis, a supercharg«I 2.3 Alfa-Romeo, a supercharged 3-litre Maserati, of late type, a Ford-engincd Amilcar, a special Ford V8, and a hybrid car with a boat engine. Each lap measured 1 Amiles. There was a handicap of T.T. type in force. G. Weaver’s Austin Seven eventually won, and Lemuel Ledd’s Ford V8 Special was second, with Richard Wharton’s Maserati third. All the drivers were amateurs and there was some trouble in policing the extensive crowd. The Alfa-Romeo misfired and the hybrid retired. An M.G. Midget hit ‘a straw bale protecting a hydrant, but the

driver escaped serious injury. ‘Thereafter the onlookers were so absorbed in looking on at the accident that the field was flagged in. But it was a good race. 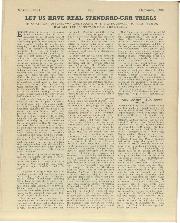 LET US HAVE REAL STANDARD-CAR TRIALS

LET US HAVE REAL STANDARD-CAR TRIALS