fast cars in his time, has sent us some notes on the methods he used, and as the results he achieved were very successful in more than one instance, let us examine his hints for instilling the magic. It is essential, Francis emphasises, to strip right down at the commencement of operations, replacing all worn bolts with new when re-assembling. Expense can be saved by rememlierii ig that ball-bearings need not be replaced if there is a little side play ; it is different, of course, if they are journal bearings taking a thrust load, but otherwise it is radial up and down movement that it is important to avoid. Francis used to clean Off all parts and run his engines with paraffin in the sump for ten minutes before finally draining off and dismantling. Road springs should be re-tempered and re-set if a change of shape is required, but instruct the smith to err on the soft side, or broken leaves may result. Crankshafts were balanced by treating each threw as a single-cylinder job, using a dummy shaft with a single throw to which the new cop.-rod and piston were attached. The necessary balance was obtained on this, and the same weight then applied at the correct place on the throws of the actual crankshaft. Francis used this method for 20 years, commencing with the Shelsley Walsh Beardmore, which, with a two-bearing crank and a 114 mm. stroke, ran at 6,000 r.p.m. without trouble. Widengren’s Amilcar Six, which ran up to 7,000 r.p.m., Bartlett’s Salmson and Dobbs’s Rileys had crankshafts balanced in this manner. Cooling fins on big-ends are recommended and our informant believes in normal white metal lining, as Separate shells are said to overheat, due to an oil film forming behind them and reducing heat dissipation. Engines designed for supercharging should have heavier pistons and con.rods, etc., than normally-aspirated engines, and consequently it is import:int not to change one’s mind when once it has been decided to supercharge. It will be remembered that Hodges Singer Nine, described last month, was run unblown, although originally designed for supercharging ; the special crankshaft had a. long extension a t the front., intended to drive the supereharger. Bearing failure and valve hounce are the worst evils of

adding a blower to a fairly normal engine in such a manner that it functions at greatly increased crankshaft speeds. Even a new crankshaft in the existing crankcase is unlikely to obviate the former trouble, and often there is insufficient space to fit stronger, multiple-valve springs. The solution is only to supercharge to increase output at moderate r.p.m. Port and combustion chamber polishing can occupy many hours, and while a grinding wheel driven by a flexible shaft will help, remember that a very high final -finish is essential even an average machinefinished surface can expose to the gas flow obst nat ions twice the area of those existing on a properly-polished surface. Inlet ports are especially deserving of attention, of course, and valves should be treated with chamfering cutters, files and scrapers to leave a blended valve and seat of -in. depth. Finish by polishing. It is possible to radius the seat so that light grinding-in will leave a narrow seat very nicely blended, but this is best done when valves and seats are new, as the valves will then -accommodate themselves should any slight distortion occur. Francis did not like split-skirt pistons, but gave .014-in. to .015-in, clearance at the top, tapering to .004-in. at the skirt. If valve clearance pockets are necessary in a piston crown they can be cut by forming a cutter froni an old valve, having ease-hardened teeth farmed round it, which can then be inserted through a guide and operated by a hand brace while the piston is held at the t.d.c. position. fin, over the calculated clearance should be cut. So far as the valve timing is concerned, an average fast camshaft should give : inlet opening 30′ before t.d.e., closing 65° after b.d.c.. and exhaust opening 00′ before bal.c., closing 35 after t.(1.c. This tinting will not

give much result below 2,006 r.p.m. The cam base should be eccentric to give .014-in. to .015-in, tappet clearance at 100 before opening and closing point, and about. .040 in. to .050 in. when the valve is shut. High temperature and the elongating effect of strong valve springs play havoc with clearances ; for example, Widengren’s Amilcar started its HourRecord run with 21 thou. clearance on the exhaust tappets and finished with an average of 3 thou. per valve. Special crankshafts for small engines cost, before the war, about £20 for a slightly strengthened, balanced shaft, and about £,45 for a shaft suitable for a highly supercharged engine. Special con.-rods enable larger diameter journals on the special crankshaft. They should have a rough rightand left-hand screw-thread finish inside the big-ends to key the white metal, which should be cast directly in the rod, to a depth of not more than

in. When fitting it is a mistake to attempt to get 100 per cent. on the crankpins, because .002-in, clearance is required. This is obtained by making up a dummy pin .002 in. greater in diameter than the crankpins and tit each bigend to this. Use a spare set of bolts when fitting so as not to pre-stress the ones to be used on final assembly. Check also that each big-end has .002-in, side clearance. Oil pressure will invariably drop when running at these clearances, but if the pump teeth can be increased in width by 178in., using a packing piece to take up the body clearance, it can usually be restored. The area of the filter gauze must also be increased. Aim at a sustained oil temperature of 60° C., using an oil-cooler if necessary. In conclusion, Francis emphasises the need for extreme cleanliness when dismantling and assemblinga competition engine. 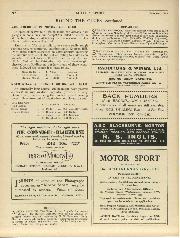 BOOKS. NUSTIN TWELVE, The Book of the, A guide for owner£. drivers. By Burgess Garbutt, with special articles by Richard Twelvetrees, and sketches by H. M. Bateman. Fully illustrated, cloth… 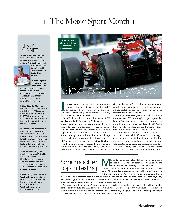 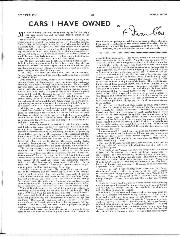 Cars I Have Owned

Ivan Carr is not perhaps so well known as some of those who have been invited to contribute to this revived series of articles. But his selection of cars and… 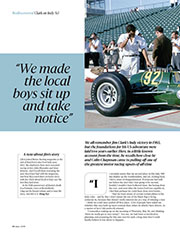 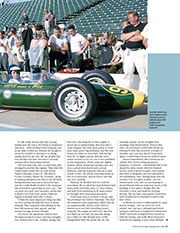 A note about Jim’s story I first joined Motor Racing magazine at the end of that first Lotus-Ford Indy year, 1963. My employers there were seasoned racing writers John Blunsden and Alan…