On and off the circuit, F1 continues to confound. Bernie Ecclestone’s Munich court case for alleged bribery of the German banker Gerhard Gribkowsky has been concluded by a payment from Ecclestone of $100 million to the German authorities.

This type of settlement, a peculiarity of the German legal system, implies neither guilt nor innocence and has been applied reportedly because the prosecution was becoming ever less confident it could prove its case – i e that Ecclestone did indeed pay a bribe and not, as he claims, a blackmail fee. There’s a man currently serving a jail term for accepting a bribe, but he’s maybe serving it for a crime different to the one he actually committed. Something happened but no one is sure quite what – which is a pretty good summation of Ecclestone’s entire era in charge of F1.

When the court case was announced, Ecclestone was asked to stand down from the board of private equity company CVC’s Formula 1 arm, which controls the sport. In reality, though, its day-to-day running remained in Bernie’s hands. At the time of writing it was unknown whether he would be reinstated to the board, but perhaps of more significance is whether the conclusion of the case will now allow the sport to be packaged up ready for sale. In that case, it would once again be subject to the whims and business pressures of the latest bunch of chancers while serious questions remain about its underlying health. Perhaps F1 has already made its really big money and all that might be left will be the relative scraps of a business in decline.

Meanwhile, the media is being criticised by various team bosses for painting the sport in a negative light – as though there were nothing really wrong with it. Their ideal seems to be that everyone runs at undiminished speed towards the precipice of the cliff, cheerfully singing. The fault line – the mismatch of cost and income – that the sport is desperately trying to straddle will not be fixed by pretending it isn’t there.

Meanwhile, it’s true that we are enjoying a fascinating season on the track – despite the big superiority of one car. Before the summer recess, only Daniel Ricciardo’s Red Bull had broken the Mercedes stranglehold and the young Australian’s sensational form – together with the fascinating ongoing struggle between Merc’s Nico Rosberg and Lewis Hamilton – has been one of the most enjoyable facets of the year to date. Red Bull’s Renault power unit cannot hold a candle to that of the Mercedes, but the RB11 is nonetheless beating all but the factory W05s – with an aerodynamic advantage probably as great as during the team’s title-winning run. This is despite the banishing of the exhaust-blowing technology, widely ascribed as the main reason for Red Bull’s previous superiority. The reason for Red Bull’s drop in form is the new engine formula and the respective responses to it from Renault and Mercedes. Aerodynamically, its advantage remains. So if exhaust blowing can no longer be the reason, where is it coming from? Just as with the bribery case, something is happening but no one (outside the team) is quite sure what.

Attention has refocused on how Red Bull can run its car with a degree of downforce-inducing rake that seems impossible. If the car’s tea-tray (the leading edge of the floor, beneath the nose) remains as rigid at speed as when it’s measured stationary by the FIA, then its leading edge would need to be beneath the surface of the track to allow the car to run with as big a difference between front and rear ride height as it does. So clearly the tea tray is moving upwards beyond a certain speed as the increasing downforce forces the car down. But how? One suggestion was that it was heat-related, that the scraping of the tray along the track surface at lower speeds heated it up sufficiently to trigger some sort of structural change in the material that allowed it to bend as it was pressed upwards. A rearwards-facing infra-red camera on last year’s Red Bull showed the tea tray to be running exceptionally hot. The FIA duly applied extreme heat to it before subjecting it to the load test – and it passed comfortably. A new theory, suggested by reader Obi Offiah, is that the change in the material’s properties could be triggered by the vibration frequency. Think of a bucket full of tightly-packed sand and how rigid that is when you press down upon it but how, if the bucket were vibrated at a high frequency, you could sink your hand into the contents.

It’s as good a theory as any for a mysterious phenomenon that has been apparent for several years, but it still doesn’t explain what happened between Bernie and the banker. 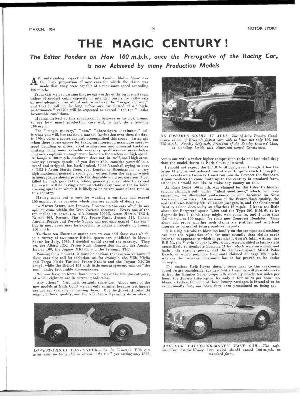 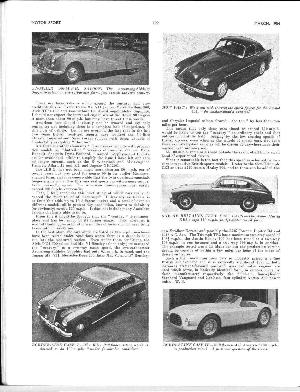 The Editor Ponders on How 100 m.p.h., once the Prerogative of the Racing Car, is now Achieved by many Production Models An outstanding aspect of the last London Motor Show… 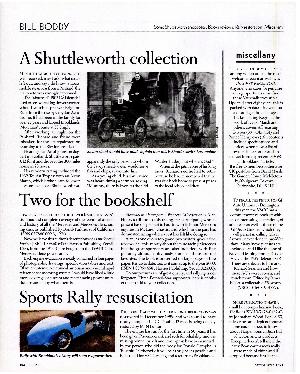 The sports rally which after a long hibernation was discovered in December 1999, and was found to have nearly completed a JCC Double 12 race, is being quickly restored by… 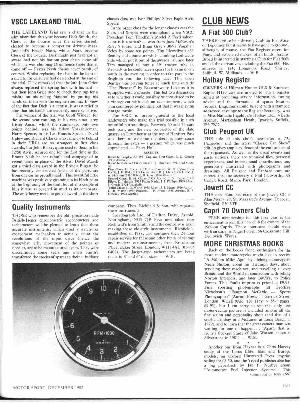 THOSE who remember the old, precision-made British-Jaeger chronometric speedometers and tachometers will be pleased to learn that these accurate instruments, which used a watch-like escapement mechanism to actually count the… 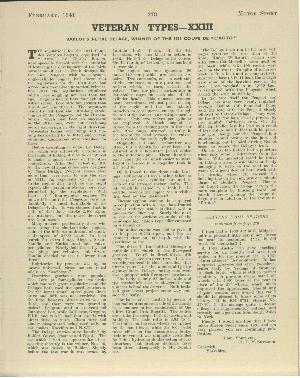 BABLOT'S 3-LITRE DELAGE, WINNER OF THE 1911 COUPE DE "L'AUTO" THE regulations for the 1911 Coupe des Voitures Legeres, organised for "l'Auto" by Charles Faroux, were specially framed with the…