All the wolds a stage…
Cadwell Park, June 22: the perfect alternative to a cancelled ’Ring trip

When I awoke this morning, the first thing I heard was a cuckoo…” The Historic Sports Car Club’s CEO Grahame White seemed rather pleased about his unexpected alarm call, one that perfectly summarised the appeal of Cadwell Park and its surrounding Wolds.

My original weekend plan had been to attend the Nürburgring 24 Hours, but a broken mother required filial fuss and attention at short notice: Germany was thus put on hold and co-ordinates set instead for the unofficial mini-Nordschleife.

Audi had kindly provided an SQ5 for what should have been an Eifel road trip. I’m not usually a fan of large cars, preferring small, underpowered alternatives that keep you engaged, because if you don’t anticipate you might spend half a day recovering the momentum you’ve just lost. The SQ5 proved to be an eye-opener, though. It wasn’t so much the mid-range punch – a given in a car whose twin-turbo V6 diesel generates 479lb ft of torque – but the 38.1mpg average showing on the trip computer. Slightly optimistic, perhaps, but still pretty impressive for something almost the size and weight of Lincoln Cathedral.

The entry for the HSCC’s annual Wolds Trophy – switched from its previous April slot – was decent, if a little smaller than those for its busiest meetings. It felt, though, like the ultimate clubbie, with trailers cluttering the landscape, one or two converted coach-transporters and precious few ostentatious trucks to spoil the effect. On Saturday evening, apparently, the paddock had bristled with many a barbecue. By the time I arrived the following morning, mugs of tea were being passed from team to team in the neighbourly manner of yore.

It felt like a good day, even before a wheel had turned.

And then, just after 9am, casual banter was replaced by the rising rasp of exhausts as Tim Davies led a phalanx of Lotus Cortinas, Mustangs, Hillman Imps and the entertainingly driven DKWs of Mike Ryman and Tim Bishop between the buttercups that line much of the circuit. Not as brisk as the Audi R8s I might otherwise have been watching, perhaps, but at least as engaging and the prelude to a 13-race card that also featured front- and rear-engined Formula Junior, Historic and Classic F3, Historic Formula Ford 1600 and FF2000, Classic Racing Cars, Historic and ’70s Road Sports and Classic Clubmans.

Touring cars apart, highlights included a fierce but fair FF1600 duel between Sam Mitchell (Merlyn Mk20), Benn Simms (Jomo) and Robert Wainwright (Elden Mk8), which eventually went Mitchell’s way after he fought back from a slowish start, and the sight of Jon Milicevic hurling his Cooper T59 through Hall Bends en route to a comfortable victory in the rear-engined FJ race. He might have been on his own, but the race would have been worth watching had his been the only car out there. If you’ve never seen him tackle that particular corner, an essential cog is missing from your racing repertoire. “It’s the best bit of the track,” he said afterwards. “I love it.”

That much was apparent from his car’s body language.

Back in the paddock, near the café, there’s a directional sign pointing to the Hall Bends Viewing Area. It might be the closest thing we have to a Tardis.

The other British DP
Silverstone, July 4-6: bygone era in a neighbouring county…

It wasn’t obvious why the northbound A43 should fully be closed on the eve of the British GP, but the workforce seemed certain it would remain that way for several days. They’d got their wires crossed, as it transpired, but I didn’t want to take any chances and later approached the circuit via the scenic route. For all that Silverstone’s landscape has altered, some elements remain unchanged. At Grand Prix time, the adjacent village is bathed in the musk of bacon as enterprising locals try to sell snacks to those trudging in from distant fields.

The event has developed something of a split personality since Formula 1 moved to the new Wing complex in 2011. The original paddock had a real buzz, with spectators crowding the entrance and support categories parked just behind, but much of that has been diluted since F1 crossed the border from Northants to Bucks. Indeed, MotoGP teams soon became disenchanted with the new arrangement and reverted to Plan A.

For those on four wheels, a feeling of separation remains – although this year the old paddock regained some of its lustre thanks to the presence of many older F1 cars, some of them static but others primed for a daily parade to commemorate the 50th car Grand Prix at Silverstone since it opened in 1948.

“It’s great to take part,” said Dario Franchitti, who drove Jim Clark’s 1963 British GP-winning Lotus 25, “but felt a bit surreal to look in my mirrors and see Jackie Stewart in a Matra MS80.” Those two apart, star turns included Alain Prost and David Coulthard (Red Bull RB8), Jackie Oliver (Lotus 33), Johnny Herbert (McLaren M26), Derek Warwick (McLaren M29C), Damon Hill (wearing open-face helmet and skiing goggles in his dad’s Lotus 49B) and, perhaps most eye-catching of all, Emerson Fittipaldi, resplendent in Marlboro-Texaco overalls for a run in the McLaren M23 that carried him to victory at Silverstone in 1975.

Rubens Barrichello was present, too, for a run in a Williams FW07B. The Brazilian left the pits wearing a glove on only one hand – and used the other to record the experience via his mobile phone. Soon afterwards, he placed a short video clip on YouTube and posted a photo on Instagram, describing it as “my best-ever selfie”.

The emotional pull wasn’t restricted to those merely watching.

Not exactly news, but this was the first time in a while that I’d attended a stripped-down clubbie at my original home circuit: 10 races for Formula Ford, Sports 2000, Caterhams and Mazda MX-5s, with big grids and few spectators.

One of Oulton’s unusual features is that its media centre also doubles as a briefing room. This isn’t wholly unknown – in 1988, the FIA tried to sweep the Zolder press room for just such a purpose at an F3000 meeting, but a few of us remained undetected and were able to listen in. Things are a touch less formal at Oulton and you are allowed to stay put.

The Formula Ford sermon was delivered by championship co-ordinator Ian Smith, a linchpin of the north-west racing community and the man you can blame for my presence here. In 1980, I’d sent a photograph (of a first-corner production saloon pile-up at Aintree, above) to Motoring News and had been pleasantly surprised when it was published. Not long afterwards I was strolling through the Oulton paddock, with copies of said photo under my arm, wondering how one should approach drivers with a view to possible sales. “Excuse me,” said a voice, “is your name Simon?”

Ian was writing the MN report that day and needed a photographer: cue my first track armband – a toe in the door with the national specialist press. A couple of months later I began writing for the paper and, 34 years on, I still seem to be scribbling stuff about Oulton.

It’s a stint that pales alongside some.

As the meeting drew to a close, Ian was presented with a specially commissioned Formula Ford painting (by Oulton Park press officer Steve Jones) in recognition of 50 years of continuous service to the sport.

His duty cycle began as a paddock marshal, at the final meeting on the full Aintree Grand Prix circuit in 1964. 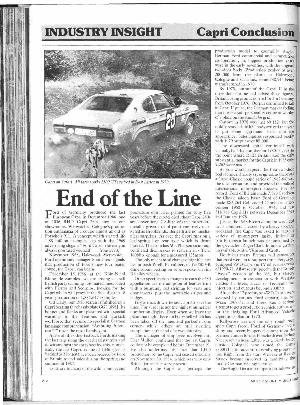 End of the Line

Ford of Germany produced the last European Capri in December 1986, one of 1036 RHD Capri 280s now in our showrooms. We watched Cologne's production euthanasia of a coupe almost… 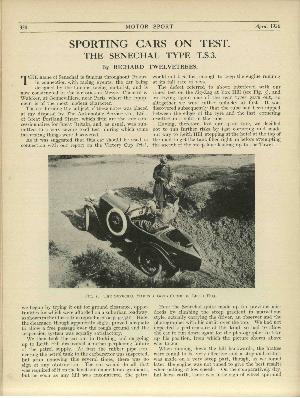 SPORTING CARS ON TEST. THE SENECHAL TYPE T.S.3. By RICHARD TWELVETREES. THE name of Senechal is famous throughout Prance in connection with racing events, the car being designed by the… 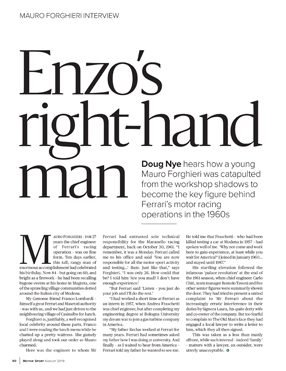 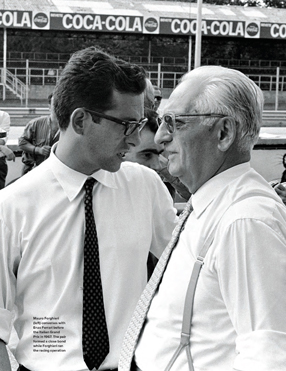 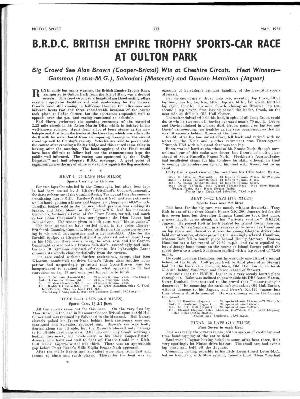