Jaguar has announced its own in-house ‘Special Vehicle Operations’ unit and confirmed its first product, a 250 limited-run homage to the D-type, as its opening bid.

The new car is based on the F-type roadster and is called Project 7 in honour of Jaguar’s current tally of seven wins at Le Mans. But while Jaguar is happy to exploit its racing heritage, there are no current plans to add to it.

The new car retails for £135,000 and is said to have sold out almost the moment it was announced. Perhaps best seen as an F-type Speedster, the Project 7 is most clearly distinguished by its new single head-fairing rear deck (doffing its cap to the aforementioned D), the deeper chin spoiler, extended side skirts and a tacked-on rear wing. Less easy to spot is the fact the entire roof mechanism has been dispatched in favour of a simple clip-on cover for emergencies. Combined with lightweight seats, the weight of the car drops by a significant 80kgs over the standard V8 roadster.

Power still comes from a supercharged 5-litre V8 but with the amount raised from 495bhp past the 542bhp available only in coupé versions of the F-type to 567bhp. It’s the most powerful Jaguar road car ever put into production, beating even the XJ220. It will race from 0-60mph in 3.8sec, a full half-second faster than the next-quickest convertible F-type, although top speed remains the same at a restricted 186mph.

On the chassis side, not only are there the new springs, dampers and roll bars you’d expect from a comprehensively uprated car, but also all-new front suspension geometry and standard carbon-ceramic brakes.

Although the Project 7 is capturing all the headlines, its real purpose is to draw attention to a new Jaguar division that covers everything from branded goods and modifications to existing products and clean-sheet projects, like the six brand-new lightweight E-types being built to original specification on Jaguar’s original Browns Lane site. Jaguar will also use its heritage to attract business from the historic community and is believed to be interested in maintaining, rebuilding and restoring important old Jaguars at Browns Lane in much the same way as Aston Martin Works Service does the same for its senior citizens in Newport Pagnell.

Unsurprisingly, Jaguar is not yet saying what its next SVO road car will be. In the past Bentley’s not dissimilar Mulliner division has done very good business making stretched limousines, while Ferrari has built special one-off cars for favoured clients, such as Eric Clapton’s 458-based SP12 EC.

As for the six lightweight E-types, all were sold for an undisclosed seven-figure sum, despite question marks over whether they can be registered for use on the road. Considering Lister Cars will build you a brand-new Knobbly for £250,000 with a similar Crosthwaite & Gardiner-supplied powertrain, this suggests profits that will be too healthy to ignore in future. A random trawl of Jaguar senior staff at the Goodwood Festival of Speed produced no attempt to deny that the XKSS was next in line for similar treatment.

The D-type-based roadster is an obvious candidate because it’s gorgeous, iconic and very rare, with just 16 being delivered before a factory fire brought its production to an end. Nine cars are believed to have been lost in the flames and the temptation for their chassis numbers to rise from the ashes almost 60 years later is likely to prove irresistible.

At last, good news is starting to seep out of Lotus HQ in Hethel, Norfolk. Actually that’s not entirely true: in stark contrast to its not too distant past, when Lotus needed very little excuse to make vast and implausible claims about its future prosperity, official communiqués of late have been notable largely for their absence.

However, this is because its new president, former Peugeot and Citroën boss Jean-Marc Gales, believes the embattled manufacturer should only be judged on its actions and not its words. “We are being made to work harder than we have for years,” a senior engineer told me, “and not one of us has a problem with that. There is a completely new atmosphere at the factory, things are happening, the new plans are actually achievable and for the first time in far too long, there are happy faces in Hethel.”

Naturally he would not divulge the nature of the ongoing projects, but it is well known that the Esprit replacement was close to completion at the time of controversial former boss Dany Bahar’s departure last year. It is believed that Bahar’s more outlandish plans, such as those for a Lotus city car and a large saloon, have been shelved.

My best guess – and it is a guess – is that after the Esprit, Lotus will produce a comparatively lightweight roadster to replace the current Elise, which turns 20 next year. The newcomer will be more sophisticated, user-friendly and better equipped in standard form, with stripped-out versions available for track-day use. And I’d place a small sum on Lotus calling it an Elan, too.

Fresh era ahead for Aston

Aston Martin’s fortunes are also finally looking a little brighter. Denied the all-new product it desperately needs, it has been forced to produce myriad variations on existing themes, the latest being a roadster version of its successful V12 Vantage S.

Using the same 567bhp-specification motor and seven-speed paddle-shift transmission, it powers the Vantage to 201mph, just 4mph shy of its coupé sister, making it the first open Aston to top the 200mph mark. The 0-62mph time is knocked back 0.2sec to 4.1sec. Prices have not yet been revealed, but it is expected to retail for just less than £150,000, or about £10,000 more than the coupé version.

But far more important is Aston’s long-term future, outline details of which are starting to emerge. Most critical is the new DB9, the cornerstone of Aston Martin’s plans for the future.

It is now two years away from public view but will be entirely new from end to end. Design director Marek Reichmann tells me its styling will be “far more than evolutionary”, though “clearly and instantly recognisable as an Aston”. So don’t expect anything radically post-modern, for that has never been Aston’s way, but do expect a thorough update of Aston’s current design language which dates back to the launch of the DB7 some 21 years ago.

Power will come from Mercedes-Benz’s new AMG-built twin turbo 4-litre V8 engine that will arrive at Gaydon off the peg, but which will then be given a bespoke tune, look and sound by Aston engineers. Expect construction of the car itself to follow Ferrari’s lead by eschewing carbon fibre and continuing to use predominately aluminium for both body and chassis.

As for its name, they’re wrestling with that right now. Quite clearly it will be a ‘DB’ but whether it is a DB9, 10 or another number is not yet decided. When the DB9 was launched Aston skipped past the DB8 because it wanted to make clear what a leap forward the new car was, so don’t be surprised if it’s a DB11 or 12. However, my gut says current thinking is to keep it as a DB9. After all, the Porsche 911 has been so named for more half a century and has not suffered much as a result.

But the real game-changer for Aston Martin will be its SUV. Although Reichmann won’t discuss it specifically, he does talk with sufficient enthusiasm about the concept of an Aston SUV for it to be clear the project is proceeding, as so it must with Bentley, Maserati, Lamborghini and, we are told, even Rolls-Royce preparing their own off-road rivals. It seems certain it will be based on the same platform as Mercedes’ next full-sized off-roader, and that it won’t be built at Gaydon, which is not configured for constructing such a car. Most likely, then, is that it will be built in a specialist facility within Mercedes’ Tuscaloosa plant in Alabama, where the ML is currently constructed.

There’s shortly to be a new kid on the track-day circuit. Called the Elemental RP1, it’s a two-seat roadster aiming to slug it out with the likes of the supercharged Ariel Atom 3.5 and Caterham 620R.

Unlike its closest rivals, its chief claim to fame is an all-carbon fibre tub like that of a KTM X-Bow. Power comes from a choice of three engines: most powerful will be a 2-litre Ford Duratec motor providing more than 250bhp, while those looking to drop weight as far as possible can choose Ford’s award-winning 1-litre triple that has already topped 200bhp in a Formula Ford car. The third option, which Elemental anticipates being the least popular, is a Honda Fireblade motor. All will drive the rear wheels through a six-speed sequential Hewland ’box.

The car was on display at the Goodwood Festival of Speed, so I climbed aboard and noted first how well it fitted my 6ft 4in frame – and also how it positions your feet uncommonly high, rather like a formula racing car. That’s to aid underbody aerodynamics, which are claimed to provide 200kg of downforce at 100mph acting on a car with a kerbweight of just 450kg. Prices have not yet been revealed, but are expected to be about £50,000. 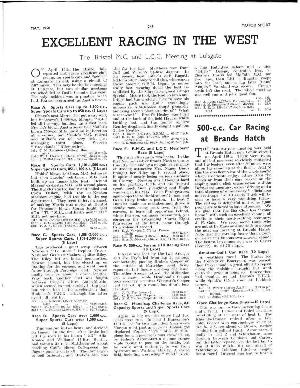 The first car-race meeting was held at Brands Hatch new 1-mile circuit, on April 16th. These were races, and all but one were so closely contested that the leaders, even… 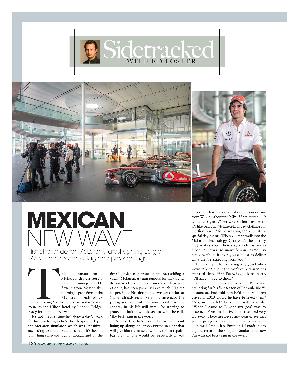 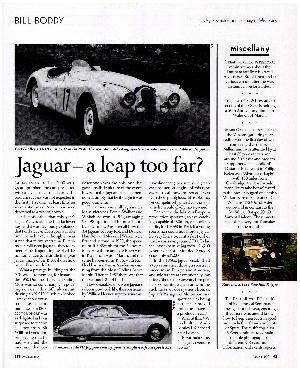 Jaguar - a leap too far?

Jaguar entered F1 in 2000 with great optimism, the cars presented with a lavish release at Lords. If a podium success was not expected in the first F1 season, at… 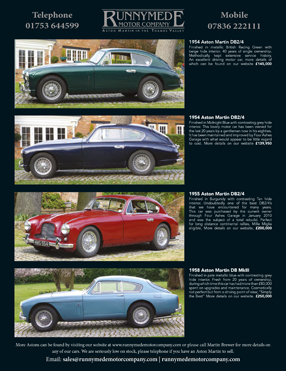 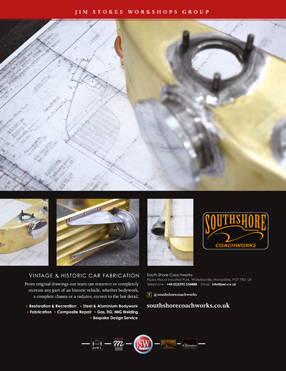