If you could have any three Jaguars in your garage, then there’s a decent chance that these would be the models you choose.

The C-type, D-type and E-type played starring roles in the company’s golden era, when it was at the top of sports car racing and setting the agenda on the road.

Now an example of each is for sale, as Jaguar enthusiast Roy Swann sells his personal collection in online auctions that end this week.

The hefty sums required for an original C- or D-type meant that Swann acquired high-quality replicas of both models, each one based on a Le Mans-winning machine.

Each of the cars is estimated to sell for more than £90,000 by The Market, Bonhams’ online auction arm.

The first of the trio of Swann Collection cars is a replica of the Jaguar C-type that won at Le Mans in 1953.

Duncan Hamilton and Tony Rolt were looking to follow Peter Walker and Peter Whitehead who won Jaguar’s first Le Mans 24 Hours race with a C-type in 1951. But their hopes appeared to be dashed when they were thrown out of the race on a technicality the day before it started. 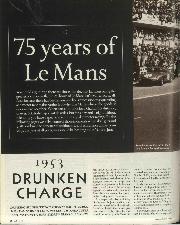 Drinking all night is not the best way to prepare for Le Mans but it couldn’t keep two hungover Britons from victory. Andrew Frankel reports Any decent reference book will…

Knowing their chances of appeal were slim, the pair headed into the evening and drowned their sorrows. All night.

When they found out that they had been reinstated the following morning, only double brandies could restore their energies. And thus quenched, they began 24 hours of racing, and won in a lightweight C-type.

That same car, registration number XKC 051, was spotted in the 1980s by Roy Swann at a Bagshot showroom owned by Duncan Hamilton who was selling his race-winning car.

Swann baulked at the £600,000 asking price, so he commissioned a replica from the Le Mans Sports Cars firm, with the help of Hamilton who allowed the original to be used as a template.

It’s not an identical copy: the front suspension and brakes are different and Jaguar badge – absent from the racing car to minimise drag – is on the bonnet at the insistence of Hamilton to ensure it wasn’t mistaken for the original. 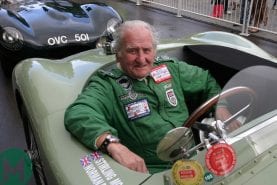 Norman Dewis, who developed the Jaguar C-type, D-type and E-type, has died. In his 33-year Jaguar career, he covered a quarter of a million miles at more than 100mph Norman Dewis…

The majority is, however, authentic, including late pre-race changes made to the car, including parallel ribs running vertically down the rear section to dampen scuttle shake, which were added after a 1953 track test.

It’s estimated to sell for between £120,000 and £180,000 when the auction closes on July 1, which is some way off the £6m going rate of the original and the estimated £2m cost of one of the continuation cars that Jaguar is producing.

The D-type was built as an homage to the 1955 Le Mans-Winning car of Mike Hawthorn and Ivor Bueb.

Sold as a kit by Proteus Cars, it was bought by racing driver John Markey, whose restoration business built the car and fitted it with a 3.8 straight-6 engine that’s more powerful than Hawthorn’s 3.4-litre motor.

The E-type is a genuine Jaguar, a Series 1, 4.2-litre version originally built in left-hand drive and exported to New York.

It returned across the Atlantic in the late 1980s and was subsequently converted to right-hand drive. It’s on sale with an estimate of £90,000 to £120,000 and bidding closes this evening.