Leonard T. Miller is an international commercial airline captain based in the United States. He is the co-author of the book Racing While Black that has been reviewed by The Washington Post, USA Today, China Daily, AutoWeek, Reuters, and ESPN the Magazine. Leonard has been interviewed on NPR, C-SPAN, ESPN, PBS, and Jay Leno’s Garage.
As president of Miller Racing Group, Inc., he negotiated over $2 million in sponsorship from Dr Pepper and General Motors. In 2005, his team won a NASCAR championship, a first for an African American. His father, Leonard W. Miller, entered a team in the 1972 Indianapolis 500 and is in the Black Athletes Hall of Fame. 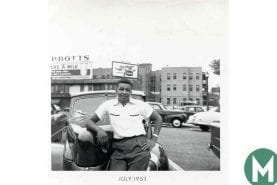 How the Black American Racers was born

Pioneers of motor sport, the Black American Racers was a team formed of African American drivers and engineers that aimed to compete against the odds Leonard W. Miller, an African…