I’ve been chatting to Gordon Shedden, he who rules over touring car racing right now as King of the British Touring Car Championship.

It was the customary hectic season, full of thrill and spills, which is exactly what the fans demand. The BTCC is hugely popular, has wall-to-wall ‘live’ television coverage on ITV and attracts vast numbers of spectators to the races. So Gordon is something of a hero, the 2012 BTCC Champion for Honda, and consistently competitive.

Unusually for a young, ambitious racing driver, he never had any ambitions to get into Formula 1. He always loved racing what we used to call saloon cars.

“Yes, that’s true, and that’s because it was never a realistic option,” he tells me from his home near Knockhill in Scotland where he first raced a Ford Fiesta XR2, “and I didn’t start karting until I was 16 which is old by today’s standards. I used to go and watch people like Cleland and Soper at Knockhill and that’s what got me excited about touring cars. I didn’t have any family money and all the other options weren’t realistic for me. Back in 1999 I think the one-make Fiesta series that supported the TOCA championship cost me about £10,000, but that was a big load of money for me then. To put that into perspective, a decent budget for Formula Ford would have been £100,000 and that was just telephone numbers. So the decision was made for me. Of course there’s a lot more space for sponsors and branding on a touring car so I could raise the money by getting the odd £2,000 here and £7,000 there to make up a budget.”

Was he never really turned on by single-seater open wheelers or was it all about the money?

“It was all about the racing, touring cars is great racing, and a hell of a lot more exciting than Formula 1 in my opinion. BTCC is very competitive, it has the biggest crowds of any racing in the UK, the teams are very professional and the TV package is incredible, so that’s a business model you can sell to a sponsor,” he says. “ I’m lucky, I’m living a dream, working with a great manufacturer like Honda, and Team Dynamics is like a second family to me.”

Gordon is one of only three Scots to win the British Saloon/Touring Car Championship. His name is now inscribed on the trophy alongside Jim Clark and John Cleland.

“I know, it’s a real honour to be part of that club,” he goes on, “to have my name alongside Jim Clark, and John Cleland rang me after the final race of 2012 at Brands Hatch and congratulated me. Sadly, you get the title but not the trophy. I only had my hands on the trophy for about five minutes before they took it away again and locked it up in a cupboard at the RAC Club in Pall Mall. I can go and look at it behind a sheet of perspex or something.”

Any regrets about missing out on a chance in Formula 1?

“No, the money involved in F1 has changed everything. It must be hard to grasp reality when you’re talking telephone numbers, it’s crazy. In touring cars the people are still real racers and not lawyers. The weather in Monte Carlo would be nice but I’m happy living in Scotland right now.”

Gordon Shedden is a winner, a very successful racing driver, but he is not a household name. And that’s just fine by him. 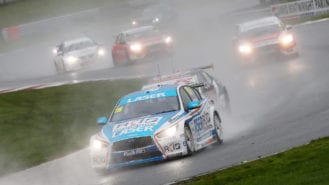 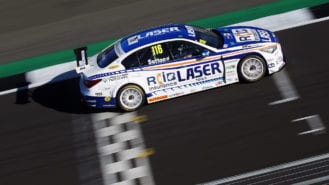