I liked him even before he revealed – 30 years after the fact – that not only had he owned a Fiat 131 Mirafiori Sport but also that he considered it considerably cooler than an RS2000 as well as being a match for it in terms of performance.

I must admit that I harboured some envy, too. I cannot deny that Kelvin Burt’s being that bit younger, that much better looking and blessed with apparently effortless speed niggled me. A bit.

It came as no surprise to discover that his Mirafiori had been zingy in orange. Mine had been dingy in black.

His Formula 3 rivals of 1993 found him maddening, too.

“They’d be there all day winding each other up, whereas I’d turn up 10 minutes before the race, win and go home,” says Burt. “That used to stress the hell out of Andy Miller [team manager at Paul Stewart Racing], but I didn’t like hanging around the paddock, with all its chat. It was not a social club for me. Racing people were not my mates; they were rivals to be beaten. There was no design to it, it’s just a way that worked for me.”

And, boy, it worked. Having battled David Coulthard in Formula Ford in 1989, Burt won the Formula Vauxhall Lotus championship of 1991 and then strung together a very promising rookie campaign in Formula 3 in 1992 to finish third overall. He thus started 1993 as title favourite and duly delivered – once a mid-season switch from Reynard to Dallara had been completed. 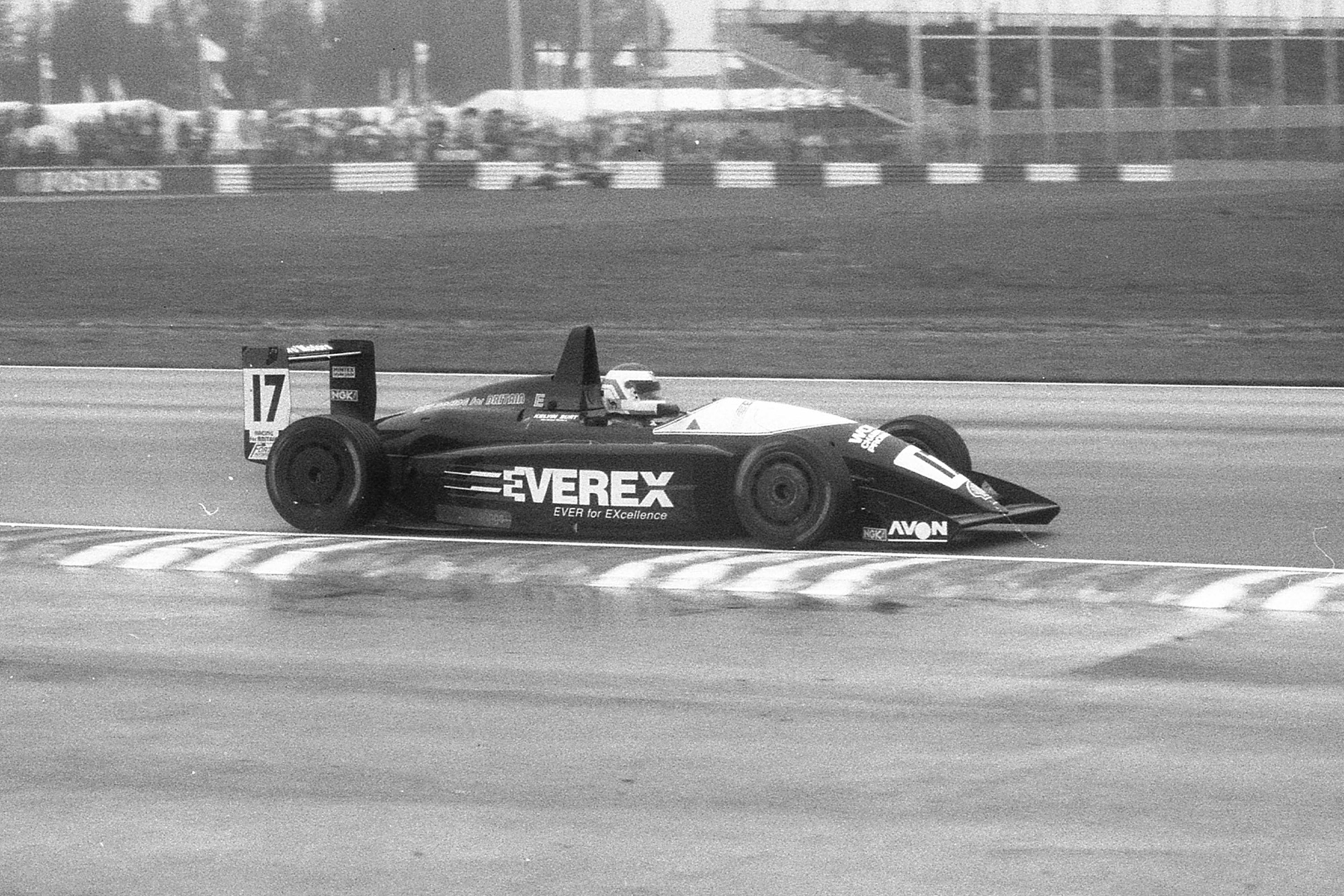 “Its torsional stiffness, particularly around the gearbox, was so much better,” he says. “In F3, with limited power, the less twist there is in a car, the more that power drives it forward. And because the Dallara didn’t twist, its engine didn’t bog down and ‘detonate’ and so they were able to advance the ignition for a bit more power.”

He put it on pole and won first time out despite no testing – and was victorious in four of the remaining five rounds.

“In retrospect I should have agreed to do Formula Nippon: big wages, lots of prize money. They were all there [drivers on the cusp of F1],” he says. “We were racing F3 at Fuji at the end of 1993 and this guy was hanging around the garage all day. The sales manager of the Le Mans company – Reynard’s distributor in Japan – he was very correct and picked his moment. I listened politely and took his card – but my mind was full of F1 and I didn’t really consider it.

“Eddie Jordan was already chatting me up to be his test driver. I suspect he thought that I had a lot of backing because my F3 car was so well sponsored. I signed a contract that obligated me to pay him money – that we didn’t have. We were confident that I could do the business in the car and that the money thing wouldn’t matter.”

The “easy times” were over.

I first met Kelvin at the end of what had been a fallow 1994 for him. I had watched his winning the Porsche Supercup race at Silverstone as a ‘guest’ – a feat that only Mika Häkkinen had achieved prior – and also minus second gear, and so was excited when he signed for Ford in the British Touring Car Championship, my patch at Motoring News.

He was less keen – even before we met: “I was treading water. It was something to do while waiting for F1 to happen. That was the wrong way to think about it, but that was how I felt.”

“I never did pay,” he says. “But then again they didn’t have enough money to do much testing. Because of that the race drivers wanted the cars whenever we did run.

“I was slated for a two-day test at Estoril, but Gary Anderson knocked my first day off. When he told me that he might be able to run me the following afternoon, I spat my dummy and went home.

“Quite a strong response.

“My last test with them was at Silverstone and I was swapping times all day with Eddie Irvine. He put new tyres and went quicker, and then his engineer tried to stop my engineer from doing the same with a few minutes to go.

“During the stand-up argument in the garage, Eddie [Irvine] hid my driving gloves! It’s all part of it, I suppose. Anyway, I found them and went quicker still.

“I was surprised to discover years later that it was Eddie who had recommended me to the team.” 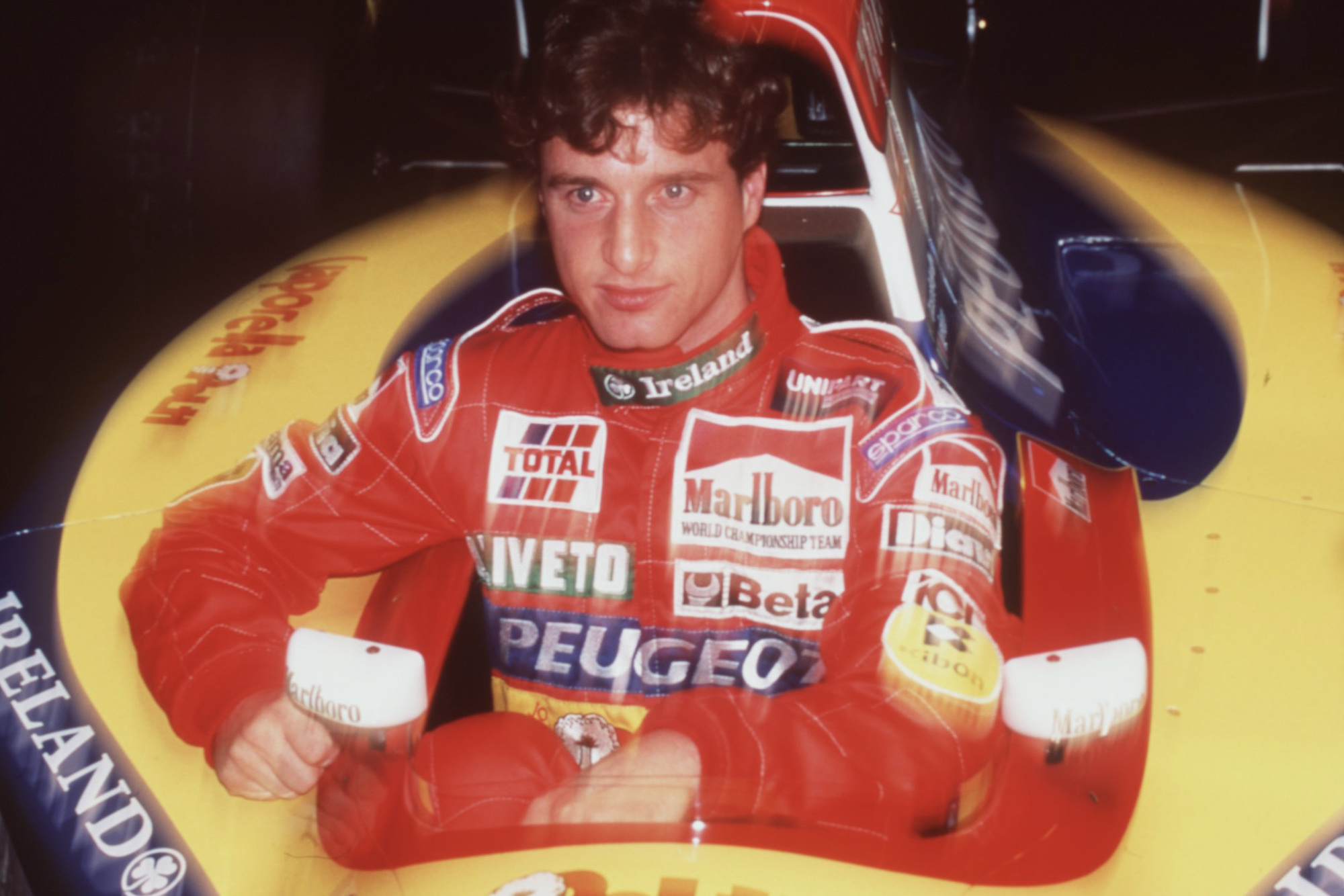 Burt traded times with Irvine – when he got to test

With F1 on the backburner, Burt was now faced with replacing BTCC legend Andy Rouse in a car run by Andy Rouse Engineering and which was understeering down the pecking order.

“Andy was great,” he says. “He rated me and wanted me in the car. That V6 was powerful but too heavy and too far forward and as a result the front tyres would go off after a dozen or so laps.

“But I think I drove well and was on top of Paul Radisich by the middle of the season.”

Cue more politics – and another tempting whiff of F1.

“Cosworth built a special engine for the FIA Touring Car World Cup at Paul Ricard and whoever was the quicker was to have it. Well, that was me. But Paul, who had won the World Cups of 1993 and 1994, tried to pull rank and got the bigwigs involved. There was a row in the paddock, Andy stuck up for me and I got the engine.”

Sixth place on aggregate amid a sea of Audis and BMWs caught another suitor’s attention: “Tom Walkinshaw intercepted me in the paddock. He wanted me to drive for Volvo and asked what I wanted. I told him I wanted to do F1, and he said that he could make me his test driver. He had found my weak point and used it.

“I should have signed for Audi.” 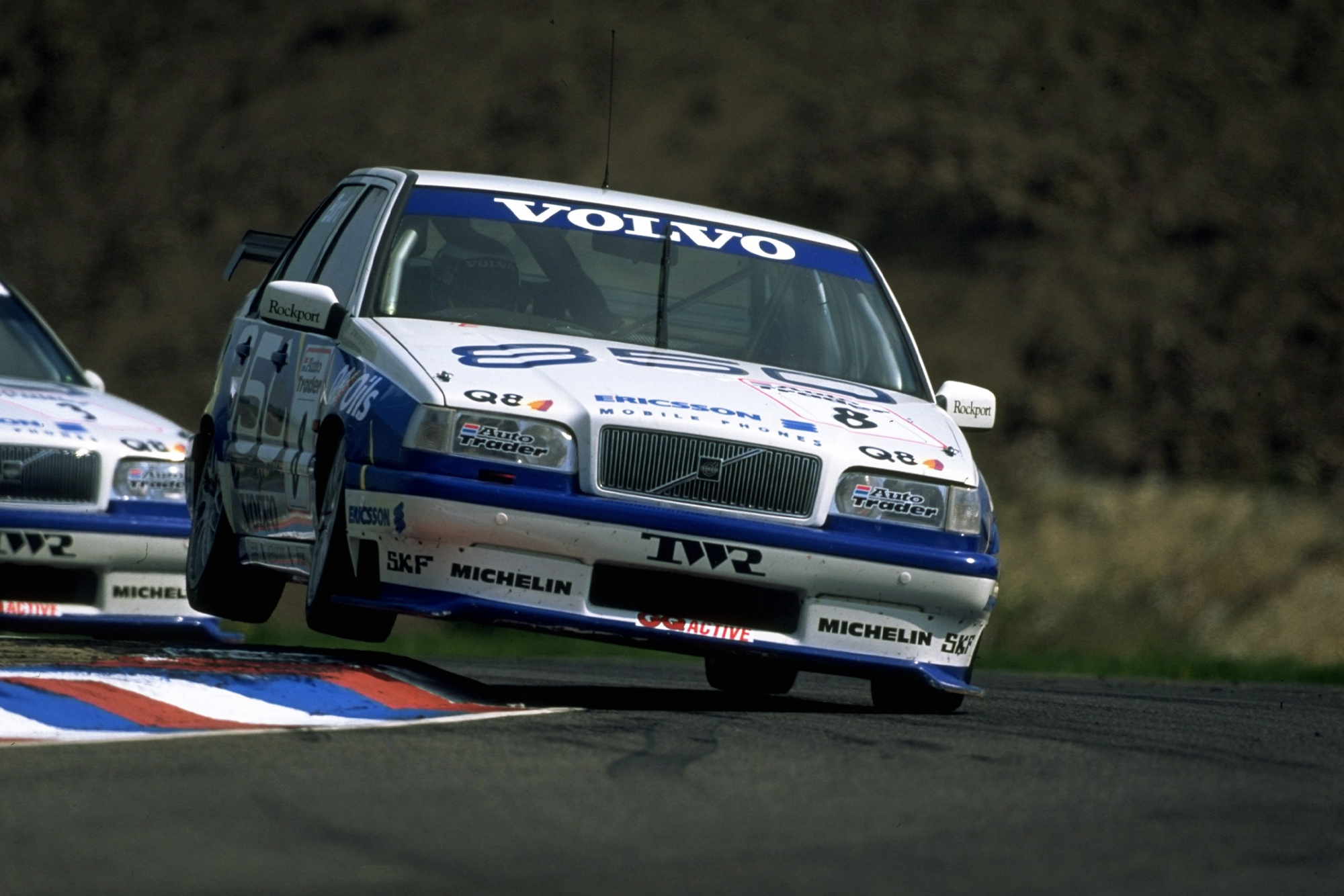 Burt attended Ligier’s 1996 launch at Monaco – he still has the overalls – but was banned from the photos by Flavio Briatore, who had promised the testing role to Vincenzo Sospiri. Not long later he followed the departing Walkinshaw to Arrows: “More donkey work. A shakedown: one day, three cars, 10 laps each.

“Plus I’d had my accident by then.”

I’d heard it rather than seen it: an artillery retort as Volvo 850 met the knuckle-end of the Armco that separated track from lake at Oulton Park.

A fortnight before that impact Burt had bombed Roberto Ravaglia’s BMW on the penultimate lap to win at Silverstone.

It was beginning to look easy again.

“But now, I’m all messed up and suddenly this has become more difficult,” he says. “I lost my form.

“I had concussion and slept for the first two days; not in a coma, but drifting in and out. And when I came round I was a chatterbox; personality change is a strong indicator of major trauma.” 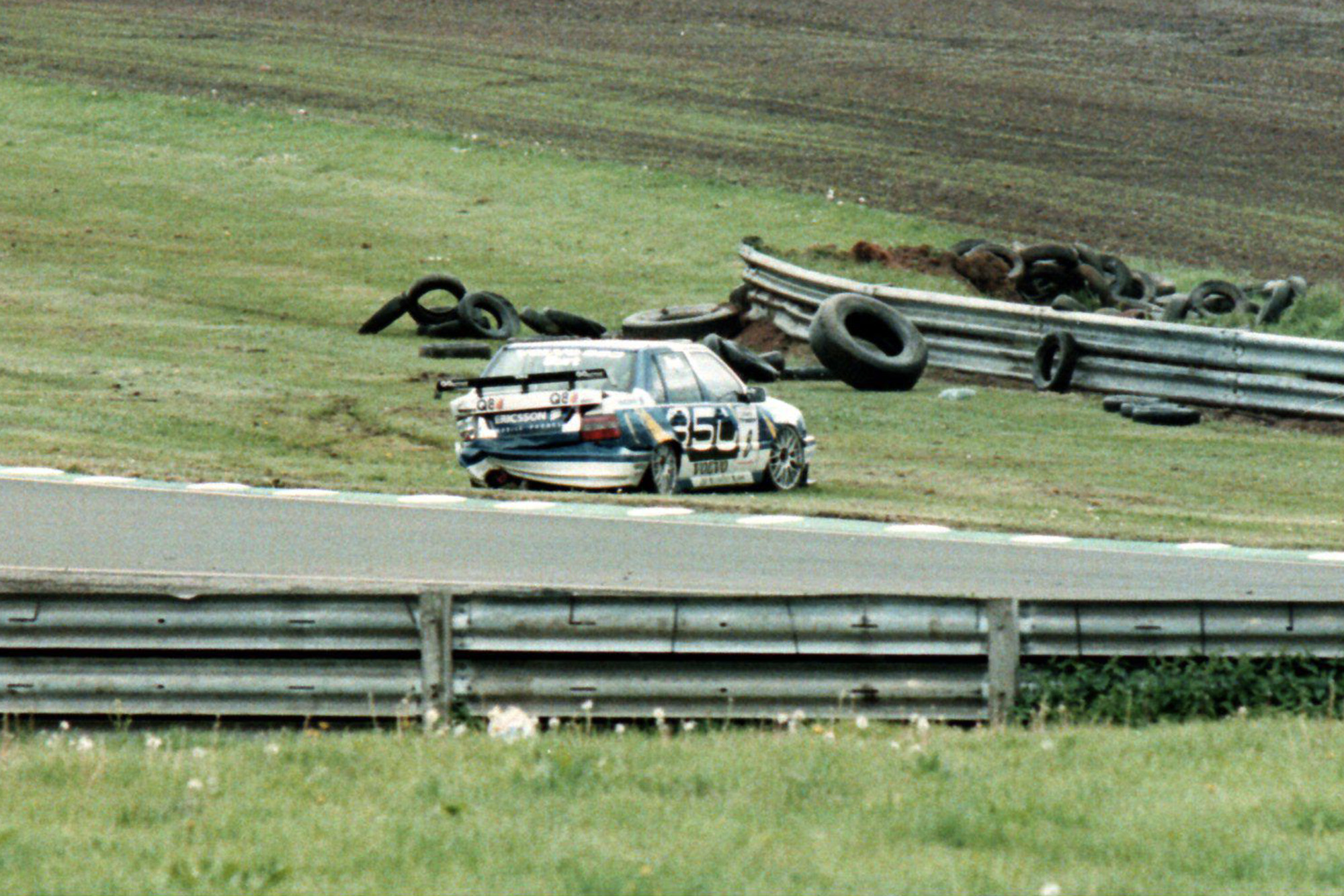 Burt recovered from 1996 crash, but his career stalled

Though fully recovered long before 1997, momentum had been lost and Burt’s position at TWR – never a touchy-feely environment – was made clear when team orders were imparted at the opening BTCC round.

“I had wanted to race the T-car – it felt like a Dallara and was a half-second quicker – but they wouldn’t let me.”

To resolve this the team then arranged a coast-down test at MIRA: accelerate to a set speed before knocking it into neutral. All three cars, five times each.

“I wanted the T-car to look the worst,” says Burt. “The team were unsighted behind a bank and so I opened the door to act as an air-brake [an action not registered by telemetry] and held it open with my foot. Not easy at 100mph.

“But it rolled about 100m further than the others. Every time.

“Guess who got that car for the next race?” 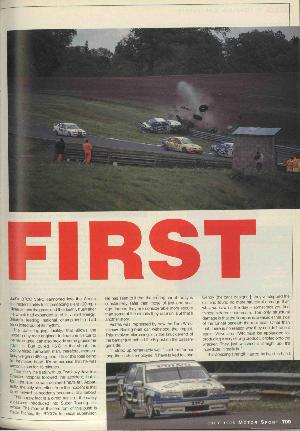 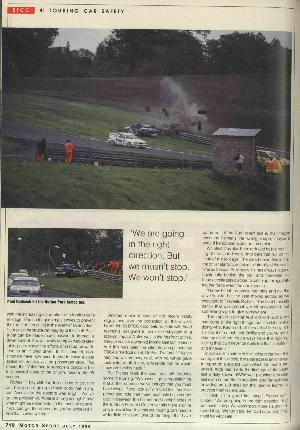 Kelvin Burt's monster shunt at Oulton Park was a shock to the system. Paul Fearnley talks to Peter Riches, the man at the forefront of Super Touring safety matters To…

Rickard Rydell, a talented Swede driving for a Swedish manufacturer, would later also be ‘awarded’ race engineer Graham Turner, whom Burt had persuaded to leave Audi days before the start of the season.

“Rickard was just using his allies to get the job done,” says Burt. “I was too naïve. I had always beaten my team-mate up to that point, so this was new – and I threw in the towel, to be honest.

“I even tried to leave the team and do Indycars. There was some talk about it and I signed with a management team. But where do you find a seat in April?”

His eventual move to Japan – to do touring cars and GTs in 1998 – came four years too late and in very different circumstances for a much-changed driver.

“I’d had such a crap year in 1997 that nobody wanted me. The worst bit was that people thought I was still f***ed up from the crash, and that was categorically not the case.

“They had made me dislike motor racing. Something I had always wanted to do and something that I had always believed in.

“Well, they didn’t make me, that was my reaction to it, but that’s what it achieved. It took me a long time to start to like it again.

“That’s racing. I’m not the only one. But every now and again somebody high up in F1 will say, ‘What a waste you were/he was.’ Though that’s nice to hear, it’s double-edged.

“That said, with no resources I was able to drive fantastic cars for super-successful teams at a very high level. That would be impossible to replicate these days.

“I just wish I could have enjoyed some of it more.”

“Pentti Airikkala, when he was training me to left-foot brake [in preparation for the BTCC], told me that I should have been a rally driver. I found all that Scandinavian Flick stuff easy.