For reasons that will become apparent, this was the most challenging month of my life. We all know motor sport blends sound and spectacle, but it can also be a source of great comfort – thanks in no small part to the community within.

You know the planets are weirdly aligned when the British Grand Prix clashes with the FA Cup Final, not to mention the British Touring Car Championship, British GT and a wide assortment of clubbies, but such are the ways of 2020. This might be a restricted version of the world to which we were once accustomed, but Brands Hatch’s fusion of Dunlop Endurance racing and classic touring cars provided a welcome escape from the indecision that governs our everyday lives. To hear the rasp of Ford Capris, Chevrolet Camaros and Triumph Dolomites underlines that the last thing this planet needs is Virgin Galactic; time travel would be much more useful. And when the track occasionally fell silent, the green woodpecker’s distinctive call could be heard from the adjacent ancient woodland.

On days such as this, why would anyone wish to be anywhere else?

No fewer than 32 cars qualified for the previous afternoon’s Classic Thunder & BOSS race – a lot of cylinders crammed into a relatively short lap; mechanical and physical tolls had reduced the field a little by Sunday, but diluted neither the diversity nor the appeal. Wide-bodied Ford Escorts are alive, well and a tribute to elegant preparation. 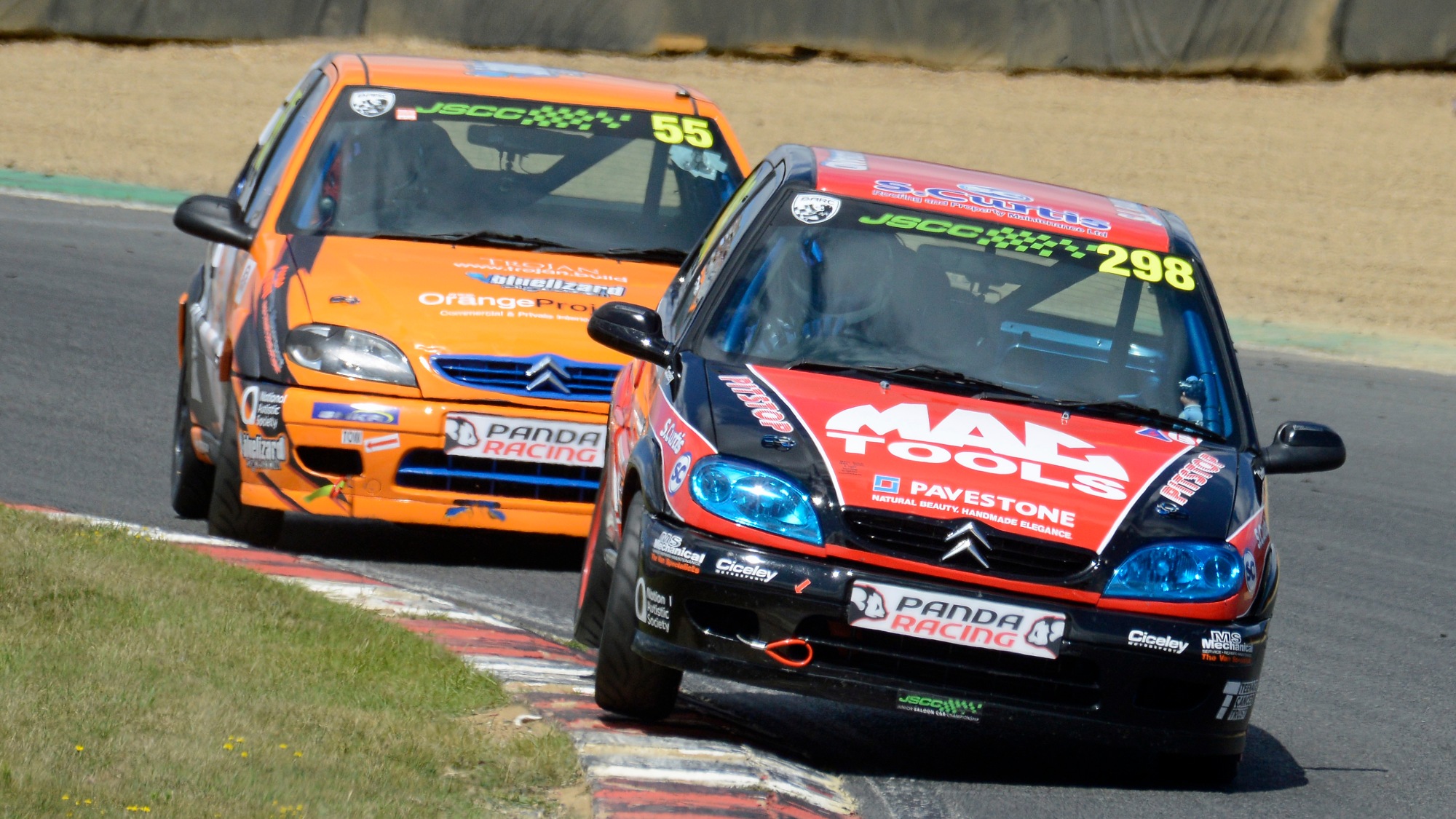 Lewis Saunders and Charlie Hand do battle in their Saxos

Junior saloons are sometimes a magnet for safety car interludes, but the first race proved to be a masterclass in tempered aggression. Yes, one or two wing mirrors were hanging loose, but for the most part, this was fantastically close, controlled racing that belied the participants’ age (14 to 17). Race two produced more of the same, albeit with a brief interruption: Lewis Saunders won twice from Charlie Hand, his margin of victory extending from 0.271sec to 0.284sec.

Consistent, then, as well as clean. It’s pleasing to see the Lancaster Insurance MGOC Championship flourishing still. I cut my teeth writing about and photographing such things 40 years ago, when MGBs were all the rage, and they retain their capacity to entertain – albeit now mostly in the slipstream of ZRs and MGFs.

Honourable mentions, too, for the immaculately presented Alfa Romeo 156T of Barry McMahon, winner of the opening Dunlop Endurance Trophy race, the bucking 4.0 V8-engined 1-series of Rick Kerry (Kumho BMW Championship), Samuel Goodwin’s energetically driven Vauxhall Astra Mk2 (CTCRC Pre ‘93 division) and the Ford Anglia of Alex Williams (CTCRC Pre ‘66), which displayed some of the engaging handling characteristics all too often dialled out of older cars in the modern age. 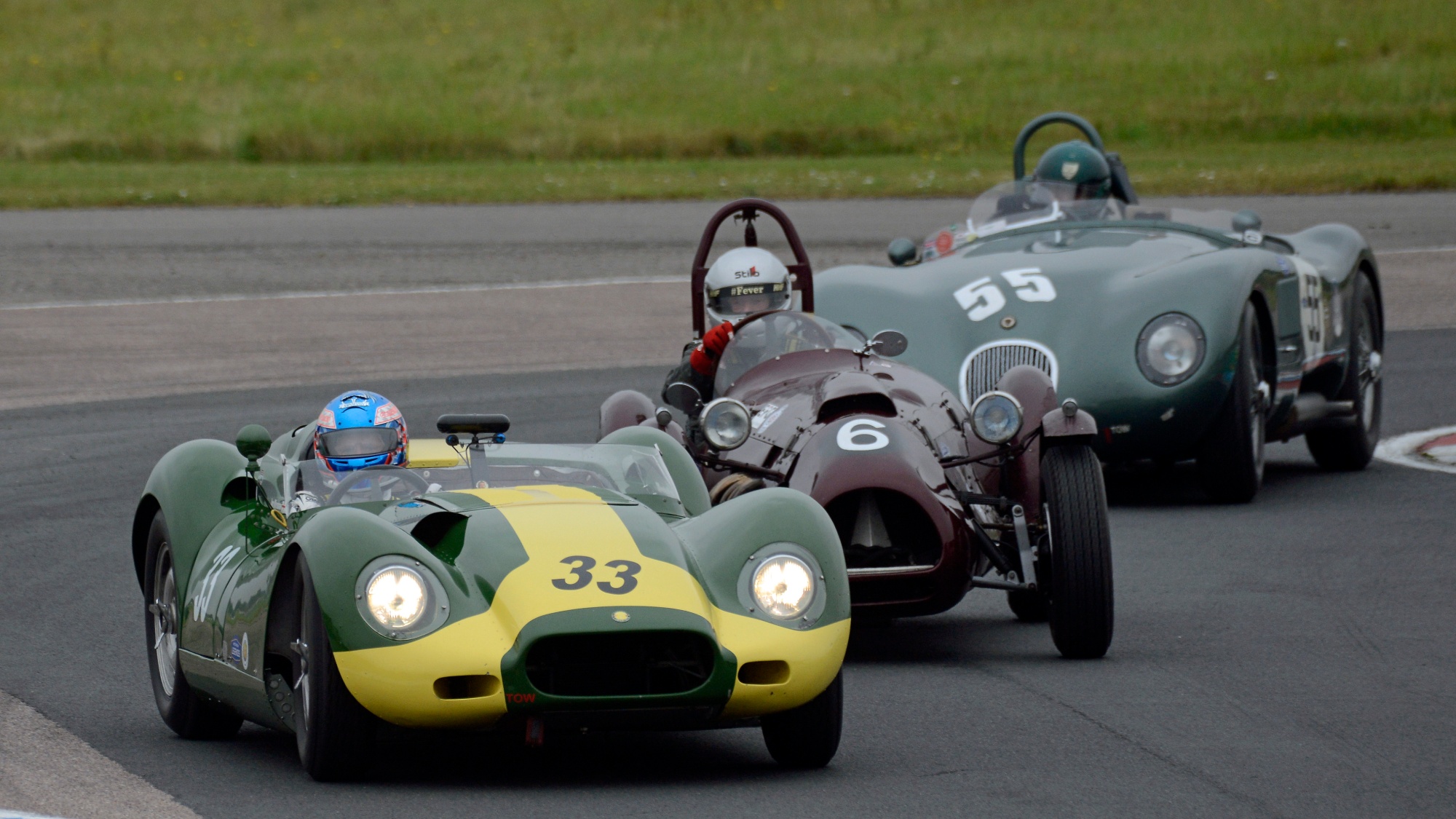 On the surface, the Thruxton Historic might have been a BARC meeting, but it drew on the collective input of various promoters to assemble as sumptuous an entry as has been seen in recent years for an event of this type. Long race formats don’t always generate close competition, but antique body language is a perfect complement to Thruxton’s long, fast sweeps (see also Goodwood). If the sight of an Austin-Healey armada being steered on the throttle doesn’t stir you, chances are you need to find an alternative interest.

It was fitting that some spectators were able to attend such a visual feast – the local council had given clearance only two days beforehand – but a pity it wasn’t accessible to more.

Dave Coyne passed almost unnoticed as he guided a Ford Mustang to victory in the HRDC Jack Sears Trophy race for 1958-66 saloons… largely due to the antics of Neil Brown and Richard Dutton. Close mates off the track and even closer rivals on it, the two have often shared a Lotus Cortina in the past. So combative was their duel for second that there were times when they might as well have been in the same car on this occasion, too: after 45 minutes they were separated by three tenths, with Dutton fractionally ahead.

It was worth the wait.

Personal highlight, though, was the sight – and period FVA sound – of Jon Miles’s ex-Alan Mann Racing Ford Cortina Mk2. At the age of six, my father took me to Oulton Park – he wasn’t particularly interested but had been commissioned to take photographs of F3 racer Natalie Goodwin and was well aware of my already daft passion for cars (particularly those with numbers on their flanks). Clear memories from that day include the slightly grubby nature of the Oulton pits – and the presence of a red-and-gold Mk2 Cortina that happened to be testing at the same time.

Was this the very same car that so captured my attention more than half a century beforehand? I have no idea, but for all time’s ferocious acceleration there are also moments when it stands still. 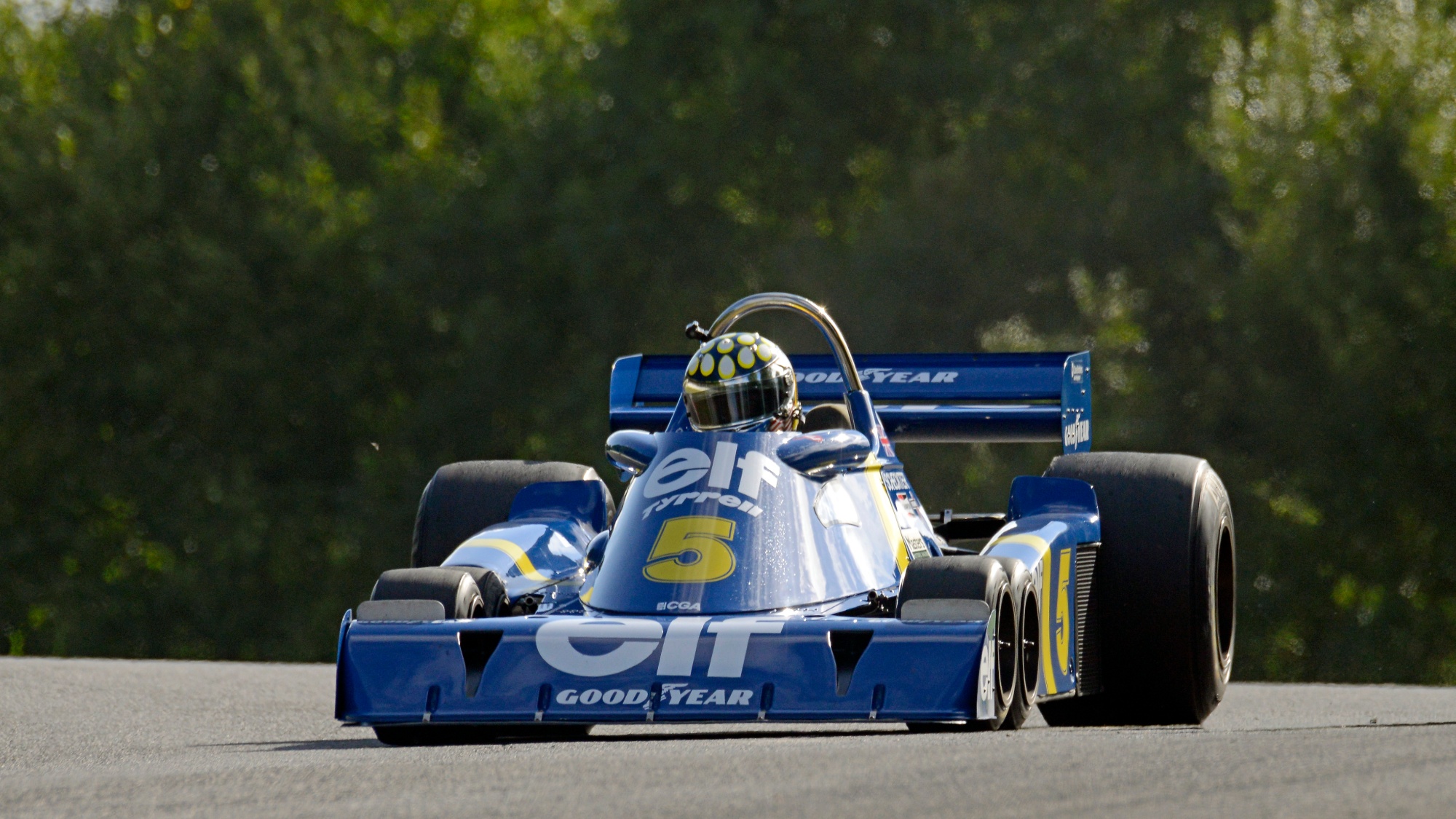 My wife Michèle had been feeling unwell for a few days prior to Thruxton, but not in a way that triggered obvious alarm. Her discomfort had increased by the time I returned, so after a bit of verbal wrestling, I managed to negotiate a face-to-face GP consultation the following morning. She was subsequently taken to A&E for assessment, but died less than 24 hours later – claimed by a blood clot, an invisible foe about which neither we nor the medical profession had known anything. Michèle and I met when she worked in the Motor Sport advertising department and had been together for 34 years, a privilege that cannot be erased, but the abrupt nature of her passing amplified the sense of shock.

Our sport is often dismissed as a cynical, self-obsessed industry, but it is also blessed with inexhaustible reserves of compassion. The love and support the kids and I have received has been immense; every syllable has been a comfort, likewise all the virtual hugs. We have also been immersed with some extraordinary offers of kindness, for which we will ever be grateful.

To one and all, our sincere thanks.

It was in the pursuit of a little normality – an option encouraged by the younger Arrons – that I pressed ahead with plans to attend the Masters Historic Festival. En route, I purposely avoided the hospital where Michèle had spent her final hours… and inadvertently ended up driving past The Tiger’s Head in Chislehurst, where in 1986 we’d first had a drink together. As I approached, with the car’s music system in wholly random mode, Booker T & the MGs struck up with Soul Limbo, theme tune to Test Match Special – absolutely one of her favourite things, so I ended up in tears anyway.

How does Spotify know these things?

Having been smothered with yet more kindness upon arrival, I headed out into the countryside to appreciate the eternal splendour – mentioned many times before – of older cars on the Brands GP loop, one of the few sections of British racetrack that from some angles looks as though the clock stopped circa 1976. Over the next two days, it proved to be the best possible therapy.

Life won’t ever be quite the same again, but motor racing will help – ditto the support of the wonderful folk within. 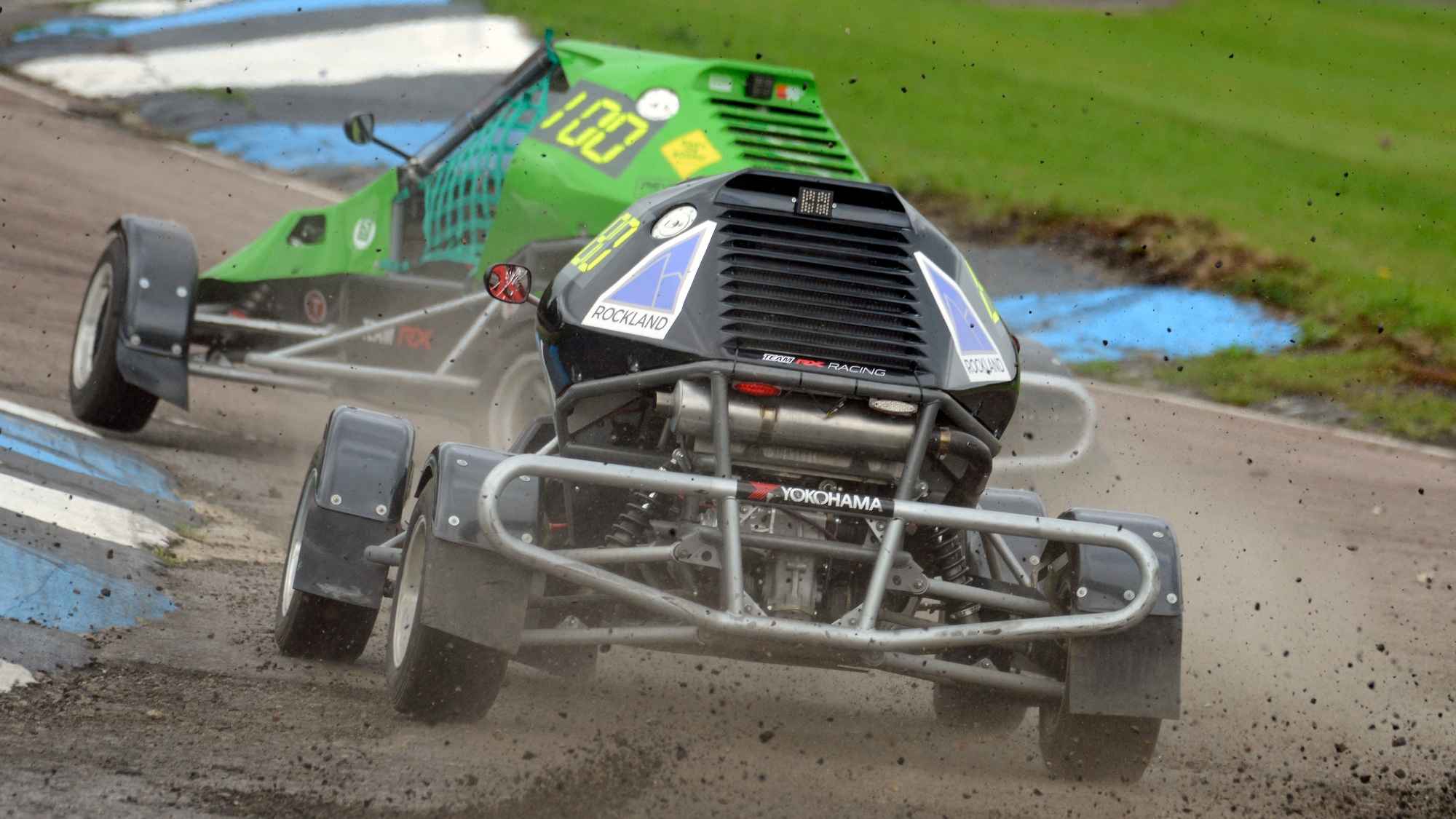 World RX might have abandoned rallycross’s spiritual home, but its domestic counterpart remains – and is just as capable of generating a sense of occasion.

This was the first of four scheduled rounds in the slimmed-down 2020 BRX 5 Nations Trophy and added attractions included the presence of multiple Olympic cycling gold medallist Sir Chris Hoy – always scheduled to compete, at the wheel of track owner Pat Doran’s Citroën C4 – and 23-time Isle of Man TT winner John McGuinness, a last-minute entry in the RX150 buggy class… basically a bit of acclimatisation before he drives the Doran C4 at Knockhill later this month.

Such things are not mere promotional gimmicks but reflect the kind of positive PR from which Formula 1 could benefit if only teams were still able to enter a third car from time to time. Both performed with distinction, Hoy finishing fifth in the Supercar final while McGuinness took third on the road before being promoted to second after a rival was penalised for a track limits infringement. Mark Donnelly won the main event in his DS3, though Oli Bennett (MINI) had been the dominant force prior to his exclusion for a breach of the fuel regulations.

There was a decent entry in all classes – and it was lovely to see a couple of original Clubman-shaped Minis, with correctly flared arches, in the Retro class. There would have been an even greater number of cars if travel restrictions hadn’t deterred regular competitors from Holland, Belgium and the island of Ireland, but Latvian Roberts Vitols felt impending quarantine was a worthwhile price to pay for the privilege of racing at Lydden.